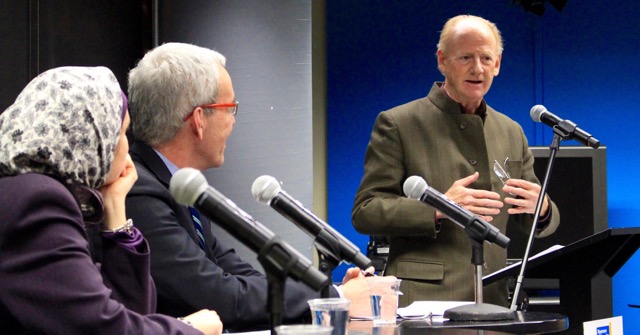 By Taryn Blanchard On February 2, the International Civil Liberties and Monitoring Group (ICLMG) and the Centre for Free Expression at Ryerson University hosted free expression experts John Ralston Saul and Monia Mazigh for a discussion of what Bill C-51, Canada’s anti-terrorism legislation, means for our civil liberties, rights and freedoms. John Ralston Saul is an award-winning novelist and essayist, author of The Comeback and A Fair Country. He is also President Emeritus of PEN International and Co-Chair of the Institute for Canadian Citizenship. Monia Mazigh is the National Coordinator of the International Civil Liberties Monitoring Group and author of Hope and Despair, a memoir of the campaign to rescue her husband, Maher Arar, from wrongful detainment and clear his name. Moderated by Jim Turk, distinguished visiting professor and director of the Centre for Free Expression, the event featured lively and informative discussions that highlighted the importance of freedom of expression and the many ways that this legislation is threatening to strip it away. Watch the video of the entire event or check out some of the most memorable moments below! Having trouble viewing the video? Click here.

John Ralston Saul explained that the way Bill C-51 was written is fundamentally wrong, even if not all parts of the legislation are wrong. It implies that we need to control ourselves or be controlled—this is a direct and insidious attack on our freedoms of expression, association and assembly that we simply must not accept.

"This law is written on the basis that everyone is a potential criminal." #C51 @JohnRalstonSaul

"When you're reading #C51, you have the impression there are 35 million potential terrorists in Canada" @JohnRalstonSaul

The powers of Bill C-51 go way beyond fighting terrorism

Monia Mazigh noted that Bill C-51 was introduced almost exactly one year ago by the former federal government in a bid to combat terrorist threats. Yes, terrorism is a threat to Canada’s national security, but the introduction of Bill C-51 identified terrorism as only one among nine potential security threats that the legislation gives various government agencies sweeping powers to combat. After a full year, most Canadians remain unaware of the broad scope of the bill beyond the terrorism-specific areas. For instance, Bill C-51 ensures that due process does not have to be followed if you are placed on the no-fly list. This is a security program that does not even have to explain why you were placed on it in the first place—terrorism is only one potential option. It’s easier to ‘delist’ yourself from the United States’ no-fly list than from Canada’s!

As an omnibus, people didn't instantly recognize the perils of #C51, @MoniaMazigh reminds us. It's been a long education campaign.

The government’s reassurances are not reassuring at all

The government has tried to reassure Canadians that Bill C-51 would exclude “lawful advocacy, dissent, protest, and artistic expression” from accusations of promoting terrorism. Well, thank you for that, but this is hardly reassuring at all; the legislation is so broad that the definition of “lawful advocacy, dissent, protest, and artistic expression” is not always clear and can be interpreted differently by many people. Faced with the potential of criminal prosecution for terror charges, will you always be willing to take that chance to exercise your lawful rights?

John Ralston Saul pointed out that there is certainly a role for privacy and confidentiality in government. How else would D-Day have been planned, to use a historical example, without it? But the right to privacy is even more important for citizens. At the centre of free expression is the ability to go together into the streets (literal or digital) to discuss and debate. But an equally important part of free expression is the right to privacy so that citizens can learn, debate and decide—in their homes, in their emails, on the telephone, via text message—what they’re going to say in public.

"Part of freedom of expression is the right to sit down privately with family, friends, and talk about things - before we go into public."

Monia Mazigh reminded us that there are now 21 agencies in Canada that can collect and share information about citizens. For those who argue that Bill C-51 doesn’t affect them or that privacy concerns don’t worry them because they have nothing to hide, Monia Mazigh invokes Glenn Greenwald’s rebuttal: in that case, can I have your email password? John Ralston Saul similarly commented on mass data collection and surveillance programs by reiterating the increasingly well-known truth that there is no demonstrable indication that they successfully prevent terrorist attacks.

People think that the age of the Internet, I have nothing to hide. NO!
Can I have your email password, please? @MoniaMazigh #C51

What in Bill C-51 do we actually need?

None of the speakers suggested that the world we live in is not dangerous or that national security laws are not necessary. What is important, however, is that citizens do not compromise what they know to be right and wrong. It is suggested that during the public consultations on Bill C-51, we need to ask what is in the law that the government actually needs to ensure national security…and then call for the rest to be done away with. As of now, it is not clear what absolutely needs to be kept, what is not already covered through other legislation and how the application of Bill C-51 will fit in with Canada’s Charter of Rights and Freedoms.

Today, and every day since it passed, Bill C-51 poses a serious threat to our civil liberties, rights and freedoms and we must be critical of it. But we also have many opportunities and avenues for our voices to be heard and to make change, especially as the government has agreed to hold public consultations. Join CJFE’s #MyPrivacy campaign to make sure your voice is heard. A big thanks to OpenMedia’s Digital Rights Specialist, Laura Tribe, for live tweeting the event!
Free Expression: Canada Bill C-51 type-blog_entry