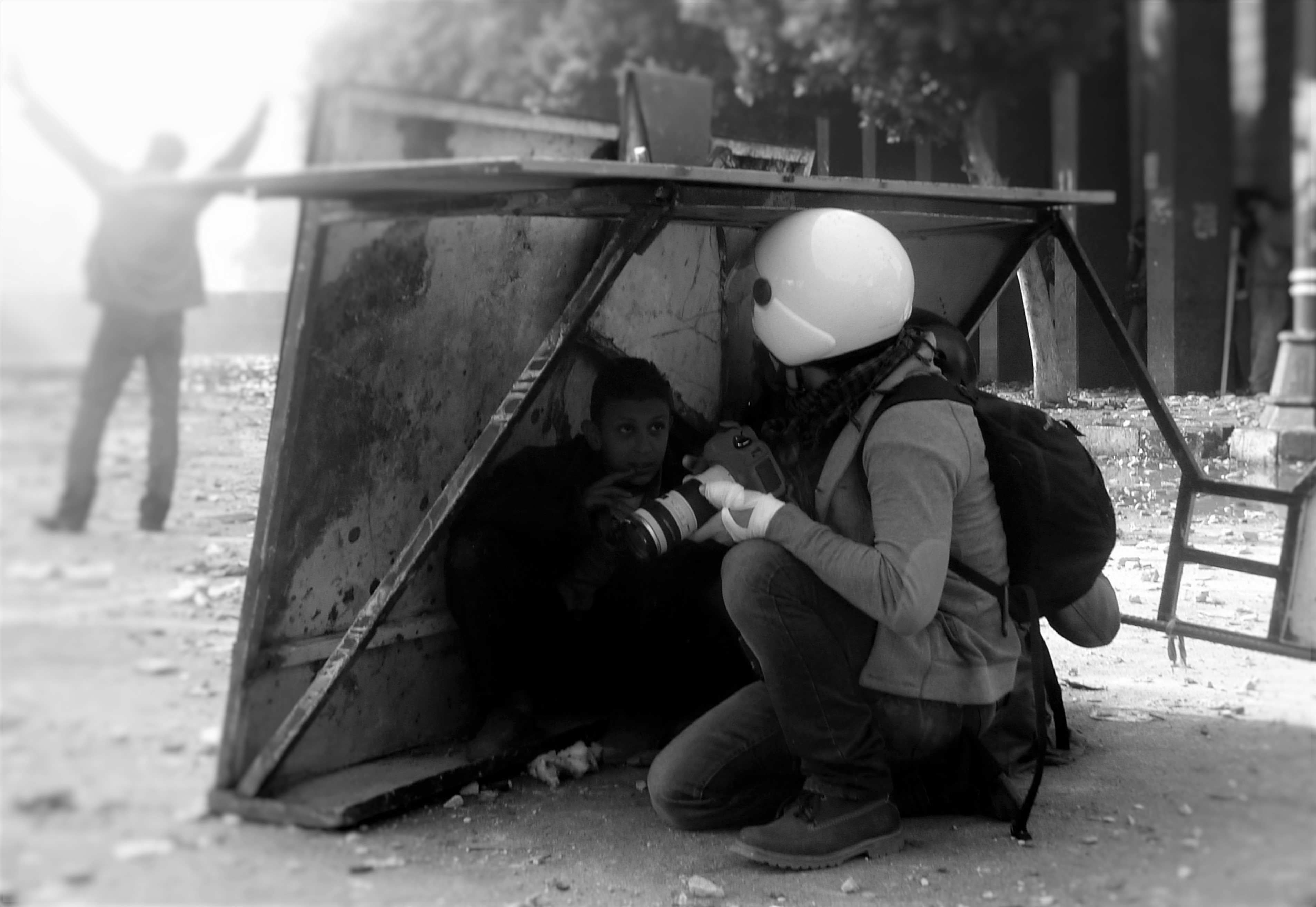 A photojournalist takes cover behind a barricade during a protest in Cairo, Egypt. PHOTO: Alisdare Hickson.

It has been almost a year since journalists Mohamed Fahmy and Baher Mohamed were pardoned and released from prison in Egypt, ending the almost two-year global campaign that came to be known as #FreeAJstaff. While the anniversary of their release on September  23rd is cause for celebration, it is also cause for reflection, debriefs and updates about the state of press freedom in Egypt today.

Spoiler: press freedom in Egypt has only deteriorated.

On December 29, 2013, three Al Jazeera English journalists were arrested in Egypt and accused of belonging to the banned Muslim Brotherhood and spreading false news. Mohamed Fahmy (Canadian-Egyptian), Peter Greste (Australian) and Baher Mohamed (Egyptian) were convicted in June 2014. A retrial began in February 2015 and ended with a second conviction on all charges in August 2015. Peter Greste was tried in absentia after being deported to Australia, while Fahmy and Mohamed remained in prison in Cairo.

Throughout this saga, press freedom advocates from all corners of the globe raised their voices in solidarity to condemn the spurious charges and show trials to which the journalists were being unjustly subjected. In addition, various governments and intergovernmental organizations expressed their disapproval of the journalists’ treatment and called for their release, including Canada, the United States, the United Nations, the European Union, Britain and Australia—which was at least partly effective, given Greste’s deportation. 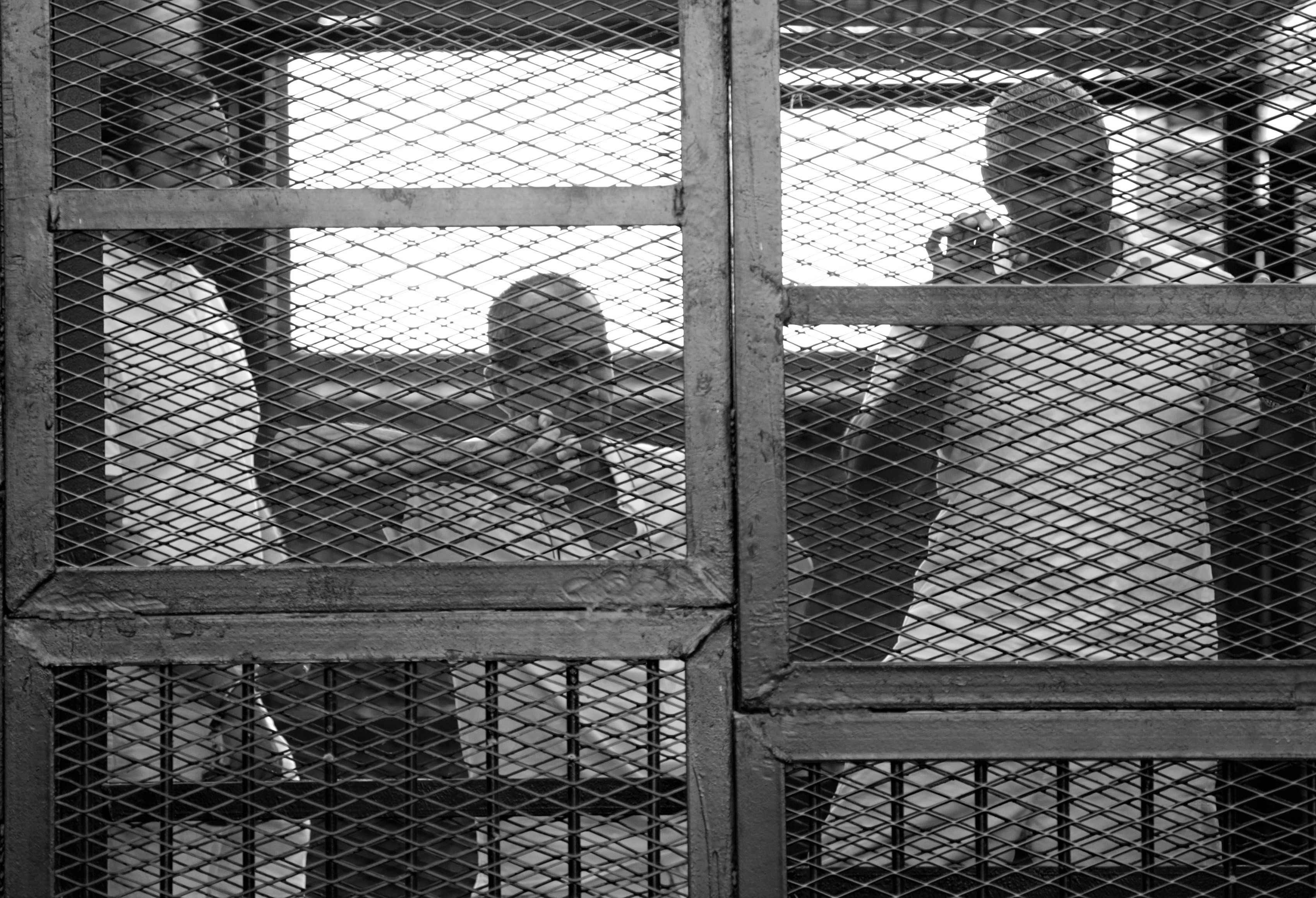 On September 23, 2015, coinciding with the Islamic holiday of Eid al-Adha, Egyptian President el-Sisi pardoned 100 prisoners, including Fahmy and Mohamed. Fahmy would return to Canada at the beginning of October, holding his first press conference in the country with CJFE.

Over the past year, Fahmy has put his much deserved freedom to hard work, becoming a champion for imprisoned journalists and Canadians abroad by:

Egypt’s 2016 clampdown on the press

The success of the #FreeAJstaff campaign unfortunately belies the state of press freedom in Egypt since the journalists’ release. By the end of 2015, Egypt was second only to China as the world’s worst jailer of journalists, with President el-Sisi continuing to use the excuse of national security to silence dissent. Research from the Committee to Protect Journalists (CPJ) shows that in contrast to at least 23 jailed journalists at the end of 2015, no journalists were imprisoned for their work as recently as 2012.

Freedom House also reports that dozens of journalists were physically assaulted during the year by both security agents and civilian supporters of the regime. In addition to physical harm and legal prosecution, Egyptian authorities continue to intimidate and silence journalists through other methods, including gag orders and the outright halting of media outlets’ operations. The result has been an almost complete nationalization of the press, as journalists and media organizations maintain the state narrative while suppressing any critical views of the regime.

To further illustrate the dramatic decline of Egyptian press freedom, the country has fallen a whopping 31 positions on Reporters Without Borders’ World Press Freedom Index in only six years—ranking 158 out of 179 countries today, down from 127 in 2010.

So just how far has the country’s press freedom fallen in 2016? In addition to the 23 journalists already in prison at the beginning of 2015, here are some of the most notable violations of press freedom in Egypt that have taken place so far this year: 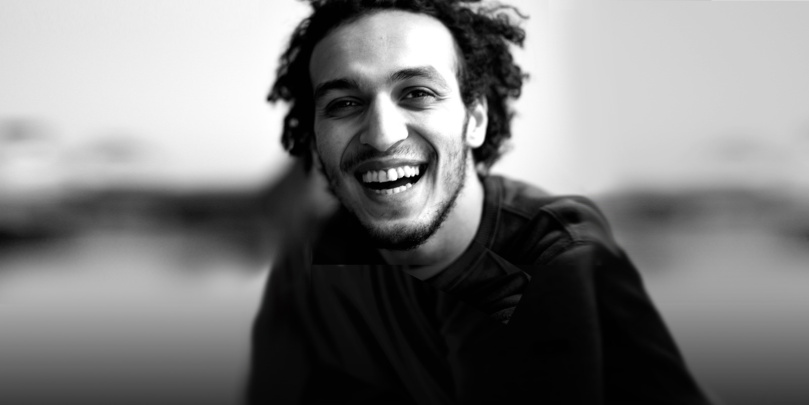 In 2016, Mahmoud Abu Zeid, a photojournalist better known as Shawkan, faced repeated postponements of his trial and surpassed 1000 days in prison. Shawkan was one of many media workers scooped up in August 2013 during violent clashes in Cairo that saw hundreds killed. Foreign journalists from the United States and France who were arrested at the same time were eventually released; Shawkan was not. Instead, he was charged with murder, attempted murder and belonging to the banned Muslim Brotherhood—crimes that could see him sentenced to death if convicted.

But Shawkan has been left waiting for a decision for more than three years now, with his pre-trial detention becoming one of the longest in Egypt’s history, as well as a flagrant violation of its constitution and laws. In comparison, Fahmy, Greste and Mohamed—whose arrests sparked the international #FreeAJstaff campaign, spent between 400 and 438 days in prison.

The years of campaigning for Shawkan’s release have also achieved international reach, with press freedom advocates around the world repeatedly denouncing his continued incarceration and calling for his immediate and unconditional release. But Shawkan’s case has not provoked hundreds of BBC reporters to protest as they did for the three Al Jazeera journalists, or lead to thousands of images being shared of people holding signs that read “#FreeAJstaff” and “#journalismisnotacrime,” often with tape covering their mouths. 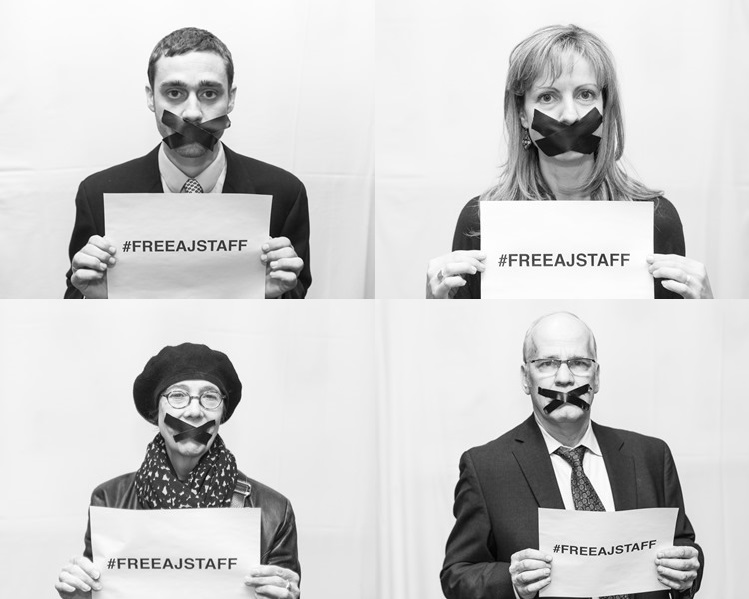 The #FreeShawkan campaign has, however, still been covered in the Western media, and the Committee to Protect Journalists (CPJ) recently showcased the photojournalist’s work in partnership with the Bronx Documentary Center in New York City. Shawkan has also been awarded one of CPJ’s International Press Freedom Awards in 2016.

As Eid al-Adha approached this year, #FreeShawkan campaigners and supporters saw their hopes rise and efforts redouble as the potential for a pardon from President el-Sisi neared. But Eid came and went on September 11-12 without a pardon for the photojournalist, despite his declining health and pardons being handed out to 759 other prisoners.

So while the #FreeAJstaff campaign was able to eke out a win—even if it took a couple years—the #FreeShawkan campaign must doggedly continue on. And because Shawkan is an Egyptian citizen, he does not have a foreign government that is obligated to apply pressure to el-Sisi. This is why it is even more important for press freedom advocates around the world—whether journalists, photographers, activists, defenders of human rights or merely supporters of truth and art—to remain committed and dedicated to the #FreeShawkan campaign.

Shawkan is behind bars solely for doing his work as a photojournalist—peacefully, brilliantly and truthfully. Fight back against your own discouragement and fatigue by imagining what Shawkan has been experiencing for the past 1000 days in Tora Prison, which he has described as “a cemetery. It is a place where dreams come to die.”

As Mohamed Fahmy said upon his return to Canada, “If you ever doubt that campaigns and advocacy make a difference…I am living proof that they do.”

Learn more and get involved