Hate speech laws in Canada: Top quotes from the #HateDebate 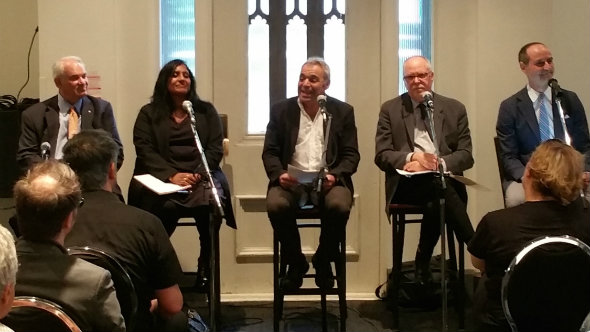 On June 11, 2015, CJFE hosted "Criminalizing Hate: The limits of Speech in Canada," a public debate on hate speech legislation in Canada. Four law and civil rights experts debated whether or not Canada’s existing laws are necessary in our democratic society, and what effects they have on our right to free expression. The debate addressed the following resolution:

BE IT RESOLVED that Canada's hate speech laws are necessary.

The discussion was lively, contentious and informative, with examples from law, civil rights and lived experiences to highlight the arguments. While the event was filled with interesting commentary and discourse from both sides, here are some of the top quotes:

Farber stated that while he believes in the importance of free speech, there must be a line drawn. Without clear limitations and consequences, words spoken on the basis of hatred could lead to more threatening ramifications, such as violence. The current hate speech laws, he argued, "are looking at acting upon the vilest form of hatred, and not merely offensive speech." Farber cited R v. Keegstra as an example of this usage, in which a teacher was criminally charged for wilfully promoting anti-Semitic views to his students.

2. "In a mature democracy, a carefully tailored and very limited hate speech law has some limited utility to address 'market failure in the marketplace of ideas.'" - David Butt

Butt argued that the existing hate speech laws ensure a healthy debate is able to take place in Canada. The market failure in our society, he says, is that a group of people can be punished or hated for being born with qualities that another group does not accept. Hate speech laws guarantee their safety by allowing the judiciary to step in when a rational discussion is unable to take place.

3. "Hate speech legislation is cheap from a government's perspective. The only effective antidote to bad speech is good and thoughtful speech in a democracy." – Clayton Ruby

According to Ruby, it is impossible to define and set limitations on what can be considered hate speech. To trust the government to do that would be unwise, he argues, and could lead to further limits on free expression. In order to truly fight hateful ideas, free and open debate must be legally protected and encouraged.

4. "What worries me more than racist and sexist bigots is a government telling me what I can and can't say." – Sukanya Pillay

Pillay stated that rather than charging a person who speaks hateful or threatening words, it is the duty of society to rise up and counter false and hateful speech. If the accused people are brought to court, such as in Saskatchewan Human Rights Commission v. Whatcott, "we in essence give them a platform." Instead of ending hateful speech, Pillay insists that the laws allow for hatred to continue growing.

For more arguments and discussion from the debate, check out the live blog: