Help Us Send the TPP Back to the Grave 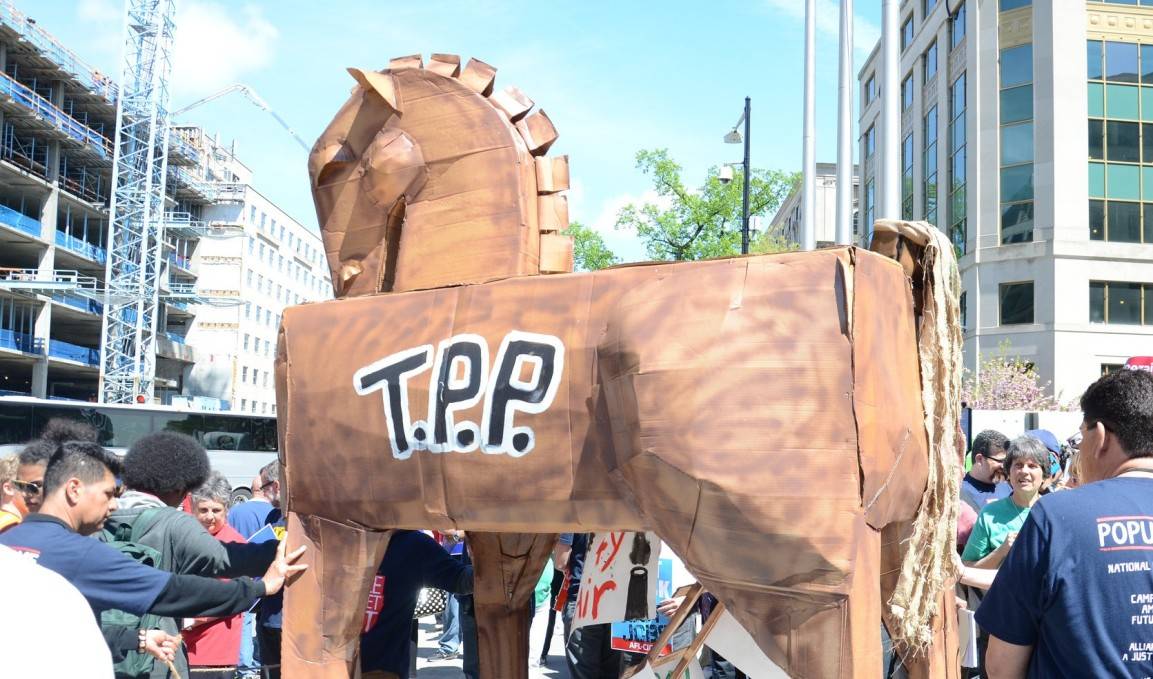 The Trans-Pacific Partnership (TPP) should stay dead, and you can help us kill it.

We thought the Trans-Pacific Partnership (TPP) was dead and buried following the election of U.S. President Donald Trump, who campaigned against the trade deal and formally withdrew from the agreement in January. Analysts and even heads of state argued that the utility and viability of the 12-nation deal was negligible without the participation of the United States. Yet the powerful economic interests behind the TPP are intent on reviving the corpse of this failed agreement, and our politicians appear to be obliging them. For the sake of our free expression and digital rights, it is imperative that we stop them.

The TPP is more than just another trade deal: it functions as a comprehensive agreement to establish common economic structures among countries which make up 40 percent of the world’s Gross Domestic Product and one third of its trade. It is, in the words of the United States Trade Representative, an attempt to “write the rules for global trade.”

Ratification of the TPP will have an enormous impact on the current state of free expression in Canada when it comes to key issues such as copyright policy, fair use, surveillance, and digital rights. It is crucial that Canadian policy-makers think carefully now, and in the long term, about the negative ramifications of the agreement, both for Canada and the rest of the world.

Donate to CJFE Today to Help Us Kill the TPP

Copyright and Fair Use

In Canada, this is a 20-year extension that severely reduces access to Canadian heritage and will cost hundreds of millions in tax dollars to administer. This means the work of, for example, 22 Governor General’s Award–winning fiction and nonfiction authors will not enter the public domain for decades to come.

It’s important to remember that copyright isn’t simply an attempt incentivize and reward the production of creative works. It is also fundamentally a restriction on speech. Copyright rules must be carefully calibrated to balance fair compensation for creators against the common good of allowing creative works to be freely enjoyed by all.

The TPP will also bring in tougher rules for “fair use” exceptions from copyright law. This aims to prevent unauthorized use of copyrighted materials (for example, teachers photocopying parts of books for classroom use), but it also makes it harder for journalists to quote copyrighted materials in news stories.

Imagine what would happen if, in a few years’ time, the Canadian government tried to shorten copyright terms or require registration for copyright or fix the patent system so that corporations cannot patent obvious and broad concepts anymore. Thanks to the regulatory mechanisms of the TPP, the matter would skip head to the courts, and our government would be subjected to a tribunal of corporate lawyers—the very same lawyers that work for the industries. This would mean that the ability of our government to create IP policy that favours public over corporate interests could be curtailed by mechanisms that circumvent our courts and parliamentary processes

As WikiLeaks points out, Article 13.15 of the telecommunications chapter of the TPP includes a surveillance-friendly clause that brings issues of free expression and democratic debate to the fore by granting government organizations—organizations like the NSA and Canada’s CSE which are meant to serve the public trust—backdoor access to public telecommunications channels.

This means that Internet service providers (ISPs) can openly and actively record the online habits of Canadian citizen’s, make our browsing activities and histories available to government agencies without a warrant (thus without due process), censor online content deemed to be unfavourable, and allow service providers to remotely terminate open access to the Internet for “suspicious” individuals.

Moreover, the TPP bans governments from imposing restrictions on cross-border information transfers. While data localization rules may, at times, seem inefficient from a purely economic perspective, they are among the few tools that countries can deploy to protect their citizens against pervasive online surveillance.

The TPP will also require members to establish an online public access database containing contact information for anyone who registers a domain name under a country-code top-level domain (such as .ca or .jp). Domain name privacy is a contentious issue globally that will be increasingly important in years to come.

Although the Canadian Internet Regulatory Authority (CIRA) already has a public database in place which meets the TPP requirements, the inclusion of such a contentious Internet governance issue in the TPP raises concerns that the multi-stakeholder decision-making model, which our current government has championed, is being undermined.

Furthermore, this would put CIRA in a difficult position if, as part of a multi- stakeholder process it was overseeing, Canadians expressed a desire to change the rules in a manner which did not meet the TPP’s requirements. After all, once you have locked Canadians into this fixed and externalized agreement, it will be very difficult to change the regulations to suit the needs of future Canadians.

CJFE finds the TPP’s language in support of freedom of expression principles to be conspicuously weak and, in most cases, non-binding. For example, the net neutrality provision in Article 14.10 only expresses support for this idea in the most general terms and contains no concrete obligations. Annex 8-B, which protects the integrity of encryption, contains a blanket exception for law enforcement demands—as we point out above, this means that the TPP provides no protection against mandated backdoors, by far the biggest challenge to encryption and thus free expression online.

It is clear that, on balance, the TPP would have a largely negative impact on Canadians’ expressive rights and interests. While concluding trade treaties involves making compromises, this agreement is not worth the great cost. Canada’s policy-makers need to think carefully about whether the harms to core constitutional rights are worth the gains that the TPP may provide. On the one hand, it subjects our government to the rulings of a corporate tribunal driven by interested that will not put Canadians first, enacts drastically pro-corporate regulations that Canadians had no hand in creating and cannot repeal or vary, and attacks open-source intellectual property initiatives. On the other, it empowers our government agencies and industry insiders to openly monitor and censor our online behaviours under the guise of protecting private interests and intellectual property.

We're lobbying to government to kill this deal once and for all, but we need your help. Please donate today to send the TPP back to the grave where it belongs.