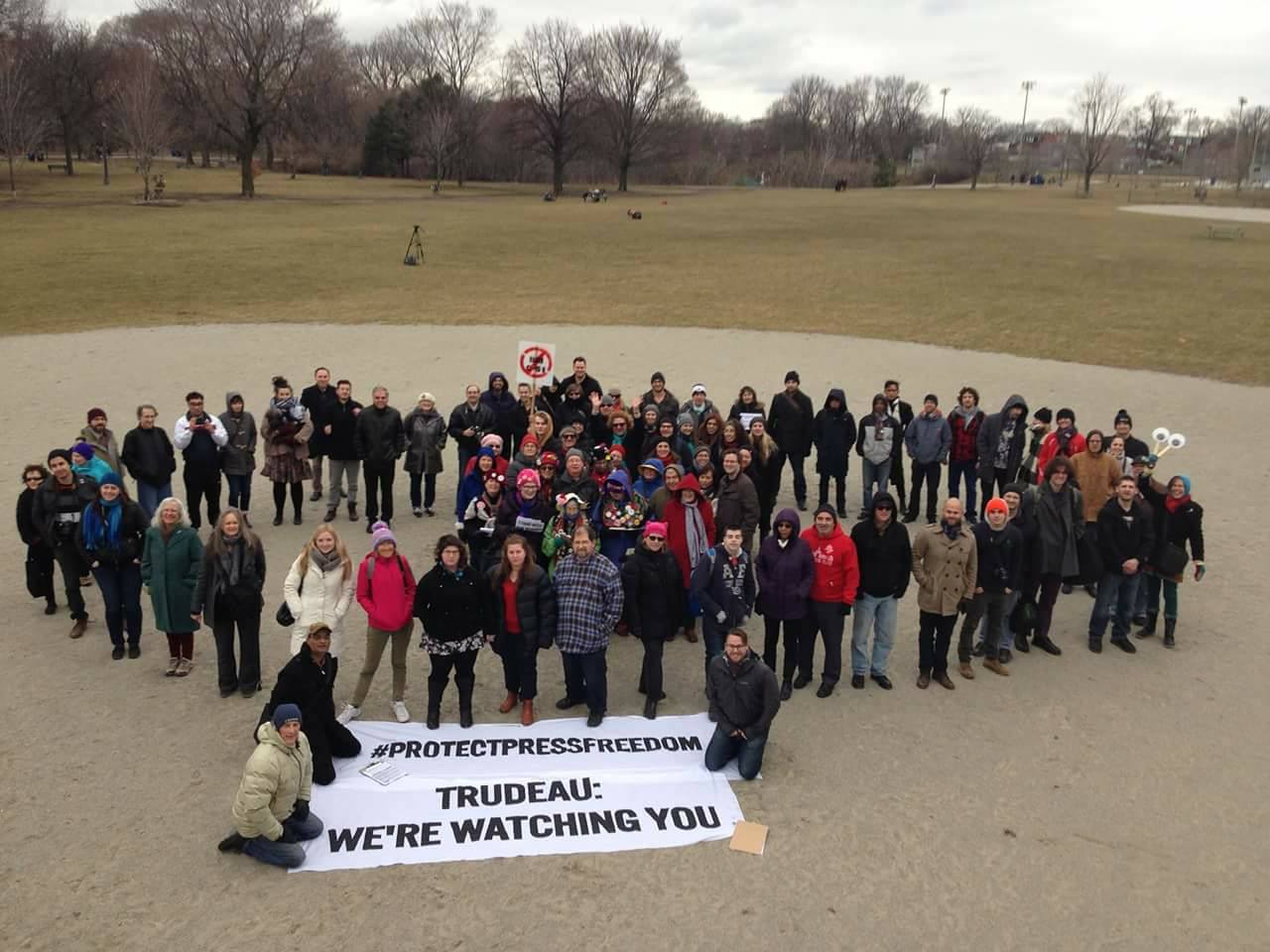 CJFE organized a National Day of Action on February 25, 2017 to demand that the government do more to protect press freedom and civil liberties.

After a yearlong campaign from CJFE and others, Bill S-231’s passage will provide protections for confidential journalistic sources.

TORONTO (October 4, 2017)― Canadian Journalists for Free Expression (CJFE) welcomes the imminent passage of Bill S-231, the Journalistic Sources Protection Act in the House of Commons. The bill, which has already passed in the Senate, is scheduled to receive a vote to approve third reading today, and is expected to pass easily. By adopting the bill, the Canadian government is taking a strong stand for press freedom, and bringing Canada closer into compliance with international standards for the protection of sources. Canada is one of the only industrialized countries in the world that lacks legislation for the protection of journalists’ sources.

"We applaud parliamentarians for taking this historic step to protect press freedom in Canada," says Tom Henheffer, Executive Director of Canadian Journalists for Free Expression. "This bill is the beginning of full legal recognition for the role that journalists play in serving the public and protecting democracy.”

HELP US WIN MORE VICTORIES FOR FREEDOM IN CANADA: DONATE TO CJFE TODAY

Bill S-231, a private member’s bill authored by Conservative Senator Claude Carignan, former Leader of the Opposition in the Senate, was unanimously adopted by the Senate on third reading in April. The Liberal government announced its support for the bill in June, and passed several amendments during committee stage.

CJFE led the fight for the passage of Bill S-231 since its introduction in November 2016. On February 25, 2017, CJFE led a coalition of civil society, media and labour organizations in five locations across the country to rally for government action on freedom of the press, and thousands more from around the world joined in on social media to call for greater press protections. A core demand of those protests included the passage of S-231. A November 2016 national poll by Mainstreet Research for CJFE found 70% of Canadians support the creation of a press shield law such as Bill S-231.

CJFE traveled to Ottawa to directly lobby Parliamentarians and senior policy-makers to support the bill. Henheffer testified in person before the House of Commons and the Senate to argue for the bill’s passage. When Canada fell four spots to 22nd in the Reporters Without Borders 2017 World Press Freedom Index, CJFE appeared on television and radio across the country to decry the decline in media freedom and highlight the importance of the bill before millions of Canadians. CJFE mobilized a global coalition of organizations on World Press Freedom Day, May 3, to send a joint letter to Prime Minister Justin Trudeau calling on his government to support the bill, and launched a letter-writing campaign involving hundreds of Canadians. Henheffer also co-authored an op-ed in the Ottawa Citizen in February making the case for the bill’s importance.

All of this made an impact. An article in June outlined how unlikely the success of this bill is: “It is rare for a government to back a private member’s bill, even rarer for it to back a bill from the Senate, and rarer even still for it to adopt a private member’s bill from the Senate introduced by a member of the opposition party. This is a sign, clearly, that the prime minister has become convinced this is an issue worth pursuing.”

He wasn’t convinced by accident. The bill succeeded because CJFE and partners in civil society fought hard for it, forcing the government to take action, and because Canadians stood up for our freedoms and our democracy.

YES, I WANT TO SUPPORT THE FIGHT FOR PRESS FREEDOM!

Bill S-231 amends the Canada Evidence Act to protect the confidentiality of journalistic sources. It will allow journalists to refuse disclosure for information or documents that identify or are likely to identify a journalistic source. This condition will apply in all cases unless the information or document cannot be obtained by any other reasonable means and the public interest (for example, an exigent security situation) outweighs the public interest in preserving the source’s confidentiality. The bill will also reverse the burden of proof for demonstrating the public interest need for disclosure, removing the onus from the journalist to defend their sources and transferring it to the requesting party who must prove the need.

The bill also amends provisions of the Criminal Code so that only a judge of a superior court may issue a search warrant against a journalist. This ensures that justices of the peace, who approved the surveillance of journalists in Quebec, would not be allowed to issue such warrants. It also allows a judge to consult a special advocate who would be responsible for defending the interests of freedom of the press before the court.

“Though this is a significant and important bill, it is only a first step to addressing the many issues facing journalists in Canada today,” says Henheffer.  “Many of the definitions are still too restrictive, including who can legally call themselves a journalist. Further reforms will be required in future so these protections reflect the reality of Canada's modern media landscape and the emergence of newer practitioners of journalism such as bloggers.” An amendment to expand the definition of journalist, introduced by NDP MP Matthew Dubé, was defeated in committee.

CJFE sees similar problems with the current definition of journalistic source, which fails to protect sources who are not ‘anonymous.’ The deficiencies of this definition are vividly demonstrated by the ongoing case of VICE News reporter Ben Makuch, who is currently seeking leave to appeal to the Supreme Court a court order to turn over his communications with a source to the RCMP. The order against Makuch sets a precedent that has potentially ruinous and wide-ranging implications for press freedom and the integrity of journalism in Canada.

“While we strongly support Bill S-231, it will provide no protection in the context of Makuch’s appeal, because his source does not conform to the requirement of source anonymity as defined in the bill,” says Henheffer. “This leaves our country open to a situation in which a young Canadian journalist could soon be behind bars for simply doing his job. Clearly, this demonstrates a need for stronger legal protections.”

Responsible reliance on confidential sources is a recognized practice by journalists to provide information to society when reliance on attributable sources of information is not possible. In recent years, it has been increasingly recognized in judicial rulings and by public office holders.

Recent events in Quebec and elsewhere in Canada demonstrate how journalists are vulnerable to often inconsistent or unfair treatment by the courts, including the issuance of search warrants and production orders which could threaten their sources. CJFE, along with Reporters Without Border and the Committee to Protect Journalists, has been granted intervenor status at the Chamberland Commission, which is conducting an investigation into police practices in Quebec following revelations that police departments in Quebec and Montreal had spied on journalists’ phone records in an attempt to identify their confidential sources. Several journalists have testified that new sources are more reluctant to come forward since spying revelations were made public in November 2016.