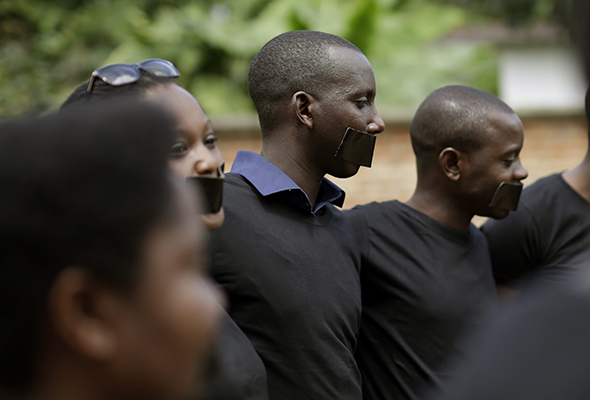 Journalists with tape on their mouths gather on the occasion of World Press Freedom Day, Bujumbura, Burundi, Sunday, May 3, 2015. PHOTO: AP/Jerome Delay

The following is an open letter signed by 15 international press freedom organizations, urging Burundian President Pierre Nkurunziza to allow media organizations in the country to reopen and operate freely, particularly in light of upcoming elections. Burundi's leading privately owned media outlets have been forcibly closed since late April, after President Nkurunziza's announcement that he would seek a third term as leader spurred extensive protests. It's been estimated that around 50 local journalists have fled Burundi for their own safety since the crackdown began.

The undersigned press freedom, media development and human rights organizations are very concerned by the continued closure of independent media outlets and the consequent lack of access to reliable information in Burundi.

Furthermore, we denounce the attacks and threats on journalists, media workers and media institutions. This is particularly concerning given the scheduled upcoming legislative and presidential elections (June 29 and July 15 respectively). Free, fair, reliable and independent media play a crucial role in the electoral process and without it Burundians will not have the information they need to make informed decisions in the upcoming polls thereby undermining the credibility of these elections.

To that end, we call on the Burundian authorities to allow for the re-opening and functioning of independent media and allow them to operate from the Maison de la Presse or from wherever they may find facilities, given that the major radio stations have been destroyed. We also encourage the authorities to allow for the rebuilding and re-equipping of these media houses. We also encourage the authorities to ensure that the more than 50 journalists and media workers who have sought refuge in neighboring countries are allowed to return safely to Burundi without fear of prosecution or persecution.