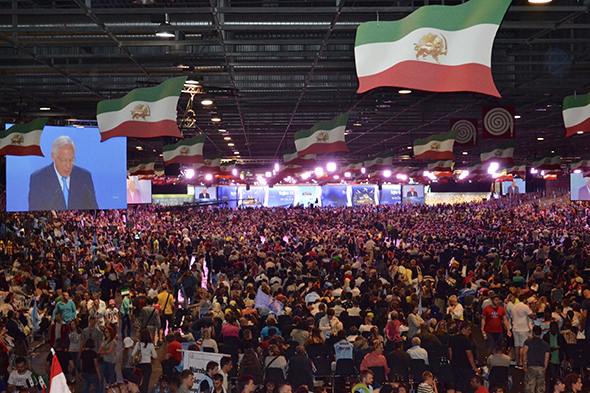 Over 100,000 supporters of the People’s Mojahedin Organization of Iran (PMOI) attend a gathering to express their support of the exiled Iranian opposition group on June 13, 2015, in Villepinte, France. The gathering is hosted by the National Council of Resistance of Iran (NCRI), of which former political prisoner Maryam Rajavi is president-elect. PHOTO: Melika Ziaei
By Violet Rusu

July 3, 2015, marks 12 years of freedom for Iranian political prisoner Maryam Rajavi, who was released from a French prison in 2003 after an arrest for her involvement with the controversial Iranian opposition group People’s Mojahedin Organization of Iran (PMOI).

The PMOI, also known as Mujahedin-e Khalq (MEK), was founded in September 1965 by Tehran University students advocating for the overthrow of the Iranian regime. Exiled to France following the 1979 Iranian Revolution, the group was designated as a terrorist organization by Canada, the European Union, the U.K. and the U.S., a decision later said to be a concession to Iranian mullahs. Between 2008 and 2012, the designation was reversed by all countries and the PMOI was removed from all terrorist lists.

The PMOI is the largest Iranian opposition group, taking an anti-fundamentalist approach that embraces gender equality and participatory democracy. Although the designation was reversed, the group continues to struggle to regain their press freedoms and freedom of expression and for liberation from their former terrorist label. The movement is still painted as former-terrorists and frequently denied attention from media outlets.

The Beginning of a People’s Movement

In 1971, six years after the founding of the movement, SAVAK—the Shah’s secret police—arrested all PMOI founding and leading members and executed all but one of them—Maryam Rajavi’s husband Massoud was the only leading member whose death sentence was reduced to life imprisonment due to intervention from Amnesty International. Maryam and Massoud headed the organization from 1985 to 1989, when she became secretary general until 1993.

Massoud was tortured to the brink of death in prison but continued to lead the PMOI despite his shackles. The group continued to gain the support of Iranians on the ground who were in search of freedoms and democracy. The people’s movement gained momentum and Massoud was one of the last political prisoners released just weeks before the overthrow of the Shah’s dictatorship in 1979. Little did the members of the PMOI know, their revolution was about to be hijacked by Ruhollah Khomeini, and their glimpse of freedom was about to be suppressed by an even more repressive tyranny.

In February 1980, Khomeini implemented the compulsory veil for women. The PMOI denounced the veil and accepted responsibility to protect any women who refused to comply with the law. By May, PMOI members and supporters were being harassed by the regime daily. Members were tortured, killed and arrested in aims to silence anyone supporting the regime’s opposition. 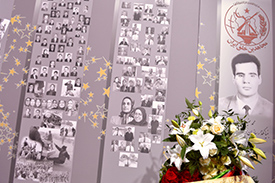 With women at the forefront of the operations, they were targeted viciously, with several slain for their support of the PMOI, including Somayeh Noghre Khaja and Fatemeh Rahimi, two young girls from the northern city of Qaemshahr; Sanam Qorayshi from the southern city of Bandar Abbas; and Sakineh Chaqoosaz, from the northwestern city of Tabriz. Nasrin Rostami, a high school student in Shiraz, was attacked by guards for distributing Mojadehin literature; one of her eyes was gouged out and she died days later in the hospital. On April 27, 1981, women supporters of the PMOI staged a demonstration with more than 150,000 people protesting the regime’s brutalities. This protest was named the first mass expression of defiance against the new order by Iran watchers.

On June 20, the PMOI arranged another peaceful demonstration in Tehran with half a million supporters in attendance. Khomeini ordered the demonstration to end at any cost; guards fired machine guns at the crowd killing hundreds and wounding thousands, marking the start of Iran’s “Reign of Terror” and the mass execution of PMOI supporters. Khomeini issued a fatwa to eliminate PMOI prisoners, stating that any supporter of the PMOI would be condemned and executed. With freedom of expression literally non-existent in Iran, expressing support for the PMOI in any way was extremely dangerous and could be a death sentence.

12 teenage girls were arrested that night and executed before their identities had been established. Four days later, a statement in the state-controlled daily Ettela’a showed photos of the girls with a summit to the parents to identify their bodies at Evin Prison. Since then, the regime has executed more than 120,000 political prisoners arrested for involvement with the PMOI.

With the fatwa in place, the surviving PMOI supporters were forced to flee Iran for their own safety. In June 1986, they relocated to Iraq with a promise of independence and freedom from the Iraqi government. Some 3,400 Iranian exiles were moved to Camp Ashraf, situated north of the Iraqi town of Al-Khalis in Diyala Province, where they enjoy freedoms and participate in democratic-style elections and decision making.

By 1988, mainly women were participating in military and political matters, which led to the PMOI’s combat units growing by 300 per cent and Maryam Rajavi being elected as president of the National Council of Resistance of Iran (NCRI)–the French-based parliament-in-exile. By 1993, an all-women's Leadership Council was elected by the PMOI's central council.

On October 8, 1997, the U.S. Department of State, under Secretary Madeleine Albright, formally designated the PMOI as a Foreign Terrorist Organization (FTO), leading to their terrorist listing in Canada, the U.K., and across Europe. This move would forever stifle the voices of the PMOI and strip its supporters of their freedom of expression rights.

By painting the PMOI as a terrorist organization, the movement was deprived of all rights and freedoms and would only receive unfavourable coverage from media outlets. Despite this blow to the movement, they continued to work diligently from inside Camp Ashraf to motivate support from international communities and those still inside Iran.

After a seven-year legal battle, the PMOI’s listing was reversed, removing them from all terrorist lists, beginning with a unanimous decision from the British Houses of Parliament in 2008, followed by the Council of the European Union in 2009, then by the Canadian government and the U.S. State Department in 2012.

A senior Clinton administration official said at the time, "The inclusion of the People's Mujahedin was intended as a goodwill gesture to Tehran and its newly elected president, Mohammed Khatami.” In an interview with BBC in 2006, Jack Straw, then British foreign secretary, admitted that the PMOI was blacklisted upon a request by the Iranian regime as a concession to mullahs. In 2012, the Spanish ambassador to Tehran acknowledged that including the PMOI in the list of terrorist groups by the European Union was decided in negotiation with the Iranian regime.

This marked a major milestone in the PMOI’s quest for liberation, yet they continue to struggle to regain their freedom of expression and press freedom, as they continue to be painted with their former terrorist label and denied attention from media outlets.