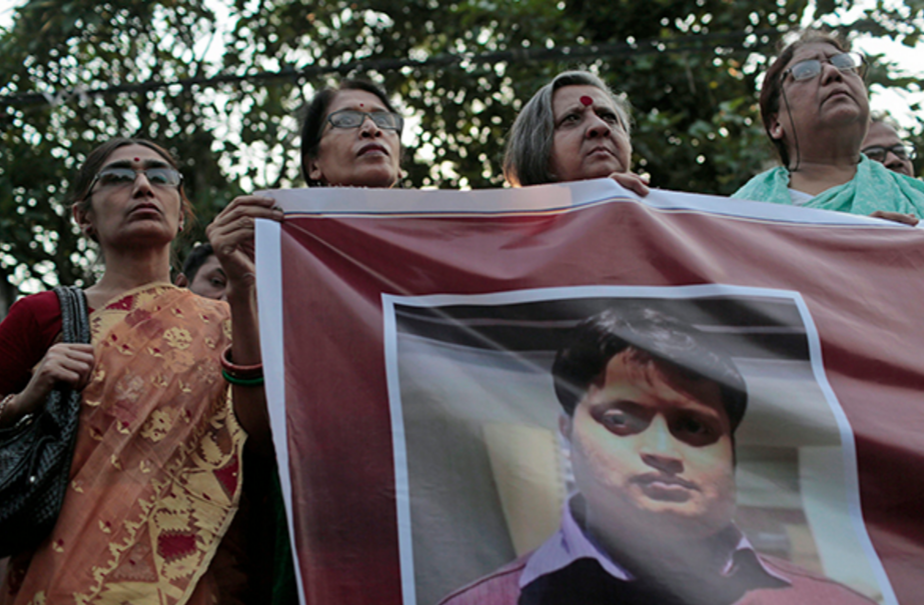 Bangladeshi social activists hold a banner displaying a portrait of blogger and author Ananta Bijoy Das during a protest against his killing, in Dhaka, Bangladesh, Tuesday, May 12, 2015. Four bloggers have been killed in Bangladesh since February 2015. PHOTO: AP/A.M. Ahad
Wednesday, August 19, 2015

CJFE adds its voice to human rights organizations, civil society organizations and supporters, and concerned members of the blogging and activist community of Bangladesh and internationally to protest in the strongest possible terms the institutional attack on Bangladeshi citizens who profess humanist, atheist or secularist views.

In the last two years, five bloggers (variously identifying as humanist, rationalist, atheist, and variously writing about science, humanist values, against Islamist extremism, or in favour of human rights and justice) have been murdered, hacked to death by assailants acting for fundamentalist militant groups (according to their own claims of responsibility). These victims are: Ahmed Rajib Haider, the science author Avijit Roy, Washiqur Rahman Babu, Ananta Bijoy Das, and Niladri Chatterjee (pen name Niloy Neel). Four of these murders have occurred since February this year. In other cases, individuals like Jafar Munshi and Anjali Devi have been killed for alleged or perceived acts of ‘defamation of religion’, such as refusing to enforce hijab on students. And since 2013, supporters of the Shahbag movement and the war crimes justice process (the accused being Islamist leaders) have also been brutally murdered by similar Islamist entities. The victims include: Ashraful Alam, Arif Raihan Deep, Nurul Islam Faruki, Jagat Jyoti Talukder, Jakaria Babu.

The murderers and their ideological supporters are of course to be condemned and must be brought to justice.

In addition, instead of helping to confront this outrageous injustice, political and state institutions have begun blaming the victims themselves and making matters worse.

Following the murder of Niladri Chatterjee on 7 August, the Inspector General of Police engaged in victim-blaming, called for self-censorship, and threatened bloggers—the very people who are being murdered—with legal action under the current quasi-blasphemy law. Meanwhile, despite some counter-terrorism operations, the police have comprehensively failed to disrupt the networks that are ordering or carrying out these cowardly attacks. Even with two of the killers caught at the scene (after the murder of Washiqur Rahman) and claims of responsibility made openly on social media and via news outlets, still the attacks go on, and the extremists behind the killings remain at large. Instead of calling for vigilance and evidence against the murderers from the general public, police have instead encouraged the public to report alleged atheistic writings.

Faced with fresh death threats against numerous named Shahbag activists and others branded “enemies of Islam” in the week after the most recent murder, a police spokesperson told those threatened merely to “lodge police complaints” if they thought they were being followed! This is a grossly inadequate, highly negligent response to what is evidently a most serious and potentially fatal threat.

A number of Islamist groups, including Awami Olama League which is closely associated with your own Awami League party, have made new demands of death penalties for all atheist bloggers and activists, echoing the rhetoric of Islamist extremists in other parties. Obviously, this demand represents a gross violation of the rights of the non-religious to freedom of thought, and against freedom of expression generally and must be firmly and explicitly rejected.

Furthermore, your Cabinet Committee for Law and Order, headed by Minister of Industries Amir Hossain Amu, on their 9 August 2015 meeting decided “to declare Atheist authors as criminals”, thereby making them subject to prosecution, and intelligence agencies have been asked to monitor blogs to find those atheist writers. Even under the current law, such a mass arrest of people who profess non-religious views in their online communications would represent a grave violation of the international human rights obligations to which Bangladesh is committed. The Home Minister in a separate speech was seen repeating the same warning message.

These institutions and officials of the state through their current stances—demonising free expression, while appeasing murderous extremists—are destroying Bangladesh's claim to be a democratic state that upholds the human rights of all citizens. To criminalize the expression of "anything that may hurt anyone’s religious sentiments or beliefs" (as the Inspector General of Police puts it) means in practice that fundamentalists and extremists can say and do anything they want, while anyone who stands for democracy, free expression, rationalism, justice, and human rights would be reduced to silence.

This is a recipe for a theocratic state in thrall to the most extremist members of society. People must be able to discuss and debate religion and politics, beliefs and practices. If they cannot, then injustice, fear and violence will reign.

To fail to confront and refute these oppressive and illiberal tendencies now, will mark the beginning of the end of Bangladesh as a free and democratic country.

We implore you to:

The signatories include threatened Bangladeshi bloggers and activists, representatives of organisations focused on human rights including freedom of expression or freedom of belief, religious and secular groups, and also individual writers, journalists, artists, academics and other professionals.

For the list of over 300 signatures, please see here.