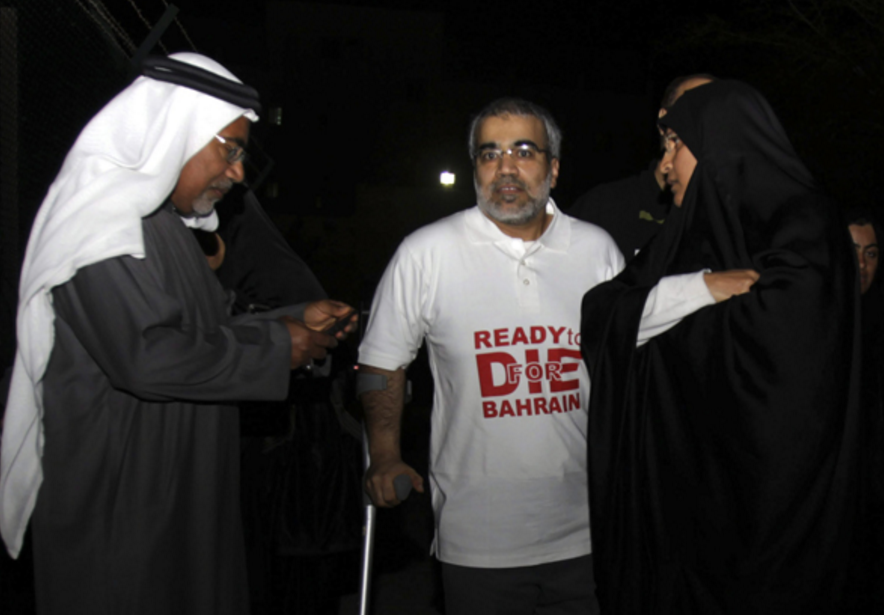 Abdel-Jalil al-Singace, center, a Bahraini Shiite Muslim political activist who was standing trial for plotting against the regime, stands with his wife, right, and other relatives outside the main police station in Manama, Bahrain. PHOTO: AP/Hasan Jamali
Wednesday, October 7, 2015

7 October 2015 marks the 200th day of Bahraini prisoner of conscience Dr Abduljalil al-Singace’s protest. Since 21 March, Dr al-Singace has boycotted all solid food in protest of the treatment of inmates at the Central Jau Prison.

We, the undersigned NGOs, call for Dr al-Singace’s immediate and unconditional release, and the release of all political prisoners detained in Bahrain. We voice our solidarity with Dr al-Singace’s continued protest and call on the United Kingdom and all European Union member states, the United States and the United Nations to raise his case, and the cases of all prisoners of conscience, with Bahrain, both publicly and privately.

Dr al-Singace is a former Professor of Engineering at the University of Bahrain, an academic and a blogger. He is a 2007 Draper Hills Fellow at Stanford University’s Center on Democracy Development, and the Rule of Law. He has long campaigned for an end to torture and political reform, writing on these and other subjects on his blog, Al-Faseela. Bahraini Internet Service Providers continue to ban access to the blog. Dr al-Singace has suffered arbitrary detention and torture on multiple occasions. In June 2011, a military court sentenced Dr al-Singace to life imprisonment alongside other prominent protest leaders, collectively known as the ‘Bahrain 13’. He is considered a prisoner of conscience.

Dr al Singace’s current protest began in response to the violent response of the Ministry of Interior to a riot that took place in the Central Jau Prison on 10 March 2015. Though only a minority of inmates participated in the riot, police collectively punished all detainees, subjecting them to beatings and other humiliating and degrading acts; depriving them of sleep and food; and denying them access to sanitation facilities. Dr al-Singace objects to the humiliating treatment and arbitrary detention to which prison authorities subject him and other prisoners of conscience. Additionally, Dr al-Singace rejects being labelled a criminal, as the government convicted him in 2011 on grounds relating to his peaceful exercise of his freedoms of speech and assembly.

Since Dr al-Singace began his protest, the international community has expressed concerns over the treatment of inmates at Bahrain’s largest prison complex and the condition of Dr al-Singace in particular. The UN High Commissioner for Human Rights raised the issue of torture in Bahrain’s prisons in June. In July, the European Parliament passed a resolution on Bahrain calling for the unconditional release of prisoners of conscience, naming Dr al-Singace. The United States clarified its concerns regarding Dr al-Singace in August. The United Kingdom has also expressed its concerns over Bahrain.

In June 2015, NGOs launched a social media campaign for Dr al-Singace – #singacehungerstrike – alongside the University College Union. Since then, NGOs also organised protests outside the Bahrain Embassy, London, and the UK Foreign and Commonwealth Office. On 27 August, the 160th day of Dr al-Singace’s protest, 41 NGOs issued an urgent appeal for the release of Dr al-Singace.

For over six months, Dr al-Singace has subsisted on water, fluids and IV injections for sustenance. He is currently interred at the prison clinic. Prison authorities seem to have finally begun to take notice of the international attention his case is attracting, as Dr al-Singace recently received treatment for a nose injury he suffered during his torture in 2011. He had waited over four years to receive such treatment. He also suffered damage to his ear as a result of torture, but has not received adequate medical attention for this injury.

According to Dr al-Singace’s family, the prison authorities will only transfer him to a civilian hospital for treatment if he agrees to wear a prisoner’s uniform, which he refuses to do on the grounds that he is a prisoner of conscience and not a criminal. Since the beginning of his protest, Dr al-Singace has lost 20 kilograms in weight. He is often dizzy and his hair is falling out. He survives on nutritional drinks, oral rehydration salts, glucose, water and an IV drip, and his family states that he is “on the verge of collapse.”

In the prison clinic, Dr al-Singace is not allowed to leave the building and is effectively held in solitary confinement. Though the clinic staff tends to him, he is not allowed to interact with other prison inmates and his visitation times are irregular. Authorities have now lifted an unofficial ban on Dr al-Singace receiving writing and reading materials, but access is still limited: prison staff have now given him a pen, but have still not allowed him access to any paper. The government has also denied Dr al-Singace permission to receive magazines sent to him in an English PEN-led campaign, despitepromising to allow him to do so. He has no ready access to television, radio or print media.

We demand Dr Abduljalil al-Singace’s release, and urge the international community to raise his case with Bahrain.

For more and background information, read the previous statement here.

This letter of concern was sent to His Excellency Shaikh Abdullah bin Mohammed bin Rashid Al Khalifa, Ambassador of Bahrain to Washington D.C. with concurrent accreditation to Canada.