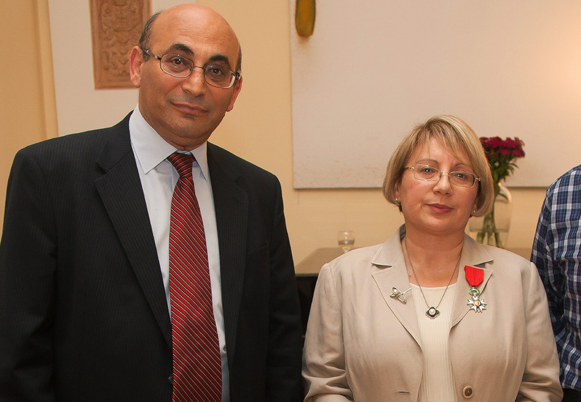 In this photo taken on Sunday, May 22, 2013, Azerbaijani rights defender Leyla Yunus and her husband Arif Yunus pose after she was awarded the Knight of the French Order of the Legion of Honor in the French Embassy in Baku, Azerbaijan. PHOTO: AP/Aziz Karimov
Monday, August 17, 2015

CJFE adds its voice to the Sport for Rights coalition and the undersigned signatories in condemning the conviction and harsh sentencing of Azerbaijani human rights defenders Leyla and Arif Yunus on 13 August by the Baku Court of Grave Crimes. After a trial marred by irregularities and due process violations, the court convicted the couple on politically motivated charges including illegal entrepreneurship, tax evasion, and fraud, and sentenced Leyla to 8.5 years in jail, and Arif to seven.

"These sentences are outrageous, and aimed purely at sanctioning the legitimate work of these two Azerbaijani human rights defenders. While the heavy sentences are no surprise, they serve to further undermine Azerbaijan's complete disregard for the international standards of fair trial and due process", said Souhayr Belhassen, FIDH Honorary President.

"The unprecedented speed with which the Yunus trial was carried out is appalling and tells us a lot about its quality. The judgment is full of inaccuracies due to a total lack of examination of the evidence provided. Violations of international standards of the right to a fair trial were obvious”, declared Gerald Staberock, Secretary General of OMCT.

Leyla, the Director of the Institute for Peace and Democracy, and Arif, a historian and activist in his own right, were arrested in July and August 2014, following Leyla's public calls for a boycott of the inaugural European Games, which were held in Baku in June 2015. Sport for Rights considered them 'Prisoners of the Games'. Leyla had also been working to compile a detailed list of cases of political prisoners, and was a strong advocate of fundamental freedoms, property rights, and peaceful resolution of the Nagorno-Karabakh conflict.

The couple have been held in separate facilities; Leyla in the Kurdakhani investigative detention unit, and Arif at the Ministry of National Security’s investigative prison. Leyla reported being mistreated on several occasions, and Arif reported poor conditions. Both Leyla and Arif suffer from serious health problems, which have sharply deteriorated in detention, and have caused delays during trial proceedings, including on the day of the verdict, when Arif fainted and was attended to by a doctor. Nonetheless, the authorities resisted calls for their release on humanitarian grounds, and the court rushed to issue a verdict.

“The health situation of Leyla and Arif Yunus is extremely worrying and deserves the highest attention of the international community. Whilst we are thankful for the international attention brought to the case by some voices, we remain concerned by the lack of action of the Council of Europe and the European Union. It is clear that the climate of fear has reached a new low with these sentences and the killing of journalist Rasim Aliyev”, said Ane Tusvik Bonde, Regional Manager for Eastern Europe and Caucasus of the Human Rights House Foundation (HRHF).

The Yunus' conviction takes place amidst a broader human rights crackdown in Azerbaijan, in the aftermath of the European Games and the run-up to November's parliamentary elections. The same week as the verdict in the Yunus’ case, journalist Khadija Ismayilova also stood trial, facing serious jail time on politically motivated charges, and Rasim Aliyev, journalist and Chairman of the Institute for Reporters’ Freedom and Safety, died in hospital after being severely beaten. With less than three months until the parliamentary elections, the Azerbaijani authorities seem determined to continue working aggressively to silence the few critical voices left in the country.

The Sport for Rights coalition reiterates its call for the immediate and unconditional release of Leyla and Arif Yunus, as well as the other jailed journalists and human rights defenders in Azerbaijan. Sport for Rights further calls for sustained international attention to the country and increased efforts to hold the Azerbaijani regime responsible for its human rights obligations in the pre-election environment and beyond.

This letter of concern was sent to Mr. Ramil Huseynli, Chargé d’Affaires at the Embassy of the Republic of Azerbaijan to Canada.
Cc: Mr. John Holmes, Ambassador of Canada to Turkey, Georgia, Azerbaijan and Turkmenistan;
The Honourable Rob Nicholson, P.C., Q.C., M.P., Canadian Minister of Foreign Affairs