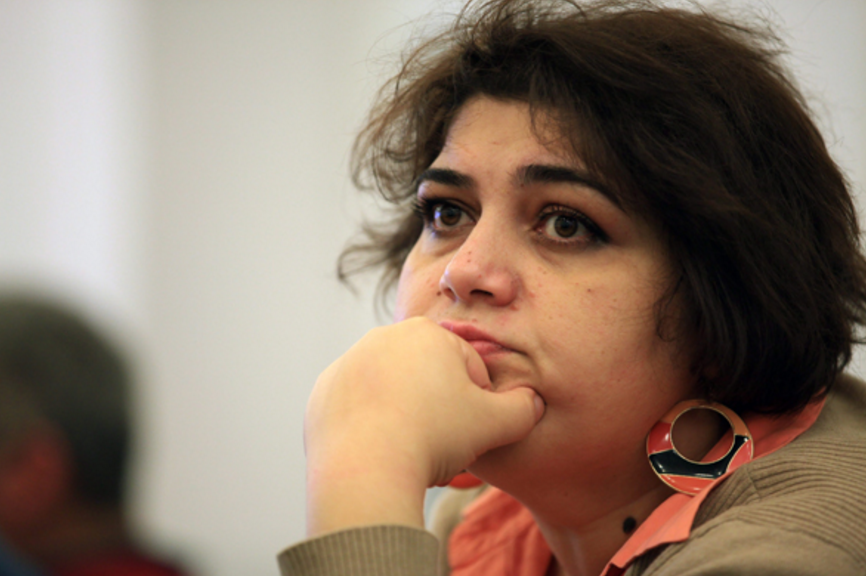 CJFE adds its voice to the Sport for Rights coalition and the undersigned signatories to strongly condemn the sentencing of Azerbaijani journalist Khadija Ismayilova to a staggering 7.5 years in prison. On 1 September, the Baku Court of Grave Crimes convicted Ismayilova on charges of embezzlement, illegal entrepreneurship, tax evasion, and abuse of office. Ismayilova was acquitted of the charge of inciting someone to attempt suicide. Sport for Rights considers the charges against Ismayilova to be politically motivated and connected to her work as an investigative journalist, particularly her exposure of corruption among the ruling Azerbaijani elite.

One of Azerbaijan’s most prominent investigative journalists, Ismayilova is also among the most courageous, one of very few willing to report on risky topics such as human rights violations and corruption. In the months leading to her arrest in December 2014, Ismayilova was aware she could be targeted due to her investigations into the business interests of President Ilham Aliyev’s family. Despite being warned not to return to the country from trips abroad—during which she spoke at international organisations on abuses taking place in Azerbaijan—Ismayilova persisted, speaking out critically until her arrest, and even afterwards, in letters smuggled out from jail.

Sport for Rights believes that in jailing Ismayilova, the Azerbaijani authorities sought to silence her critical voice before the country faced increased international media attention during the inaugural European Games, which took place in Baku in June 2015. Sport for Rights has referred to Ismayilova as a “Prisoner of the European Games,” along with human rights defenders Leyla and Arif Yunus, Rasul Jafarov, and Intigam Aliyev, who were also arrested in the lead-up to the games.

The harsh sentencing of Ismayilova is the latest incident in an unprecedented crackdown carried out by the Azerbaijani authorities to silence all forms of criticism and dissent. Less than two weeks before Ismayilova’s verdict, the same court sentenced human rights defenders Leyla and Arif Yunus to 8.5 and seven years in jail, respectively. Authorities have so far disregarded the widespread calls for humanitarian release of the couple, who both suffer serious health problems that continue to worsen in custody. Human rights defenders Intigam Aliyev, Rasul Jafarov, and Anar Mammadli are also serving staggering sentences of 7.5 years, six years and three months (recently reduced from 6.5 years by the appellate court), and 5.5 years, respectively, all on politically motivated charges.

The situation for journalists in Azerbaijan is also dire. On 9 August, journalist and chairman of the Institute for Reporters’ Freedom and Safety Rasim Aliyev died in hospital after being severely beaten the previous day. Aliyev had reported receiving threats in the weeks leading to the attack, and the police failed to provide him with protection. This attack followed an earlier high-level threat against an Azerbaijani journalist, Berlin-based Meydan TV Director Emin Milli, in connection with his critical reporting on the European Games. In addition to Ismayilova, journalists Nijat Aliyev, Araz Guliyev, Parviz Hashimli, Seymur Hezi, Hilal Mammadov, Rauf Mirkadirov, and Tofig Yagublu are also behind bars on politically motivated charges.

The Sport for Rights coalition reiterates its call for Ismayilova’s immediate and unconditional release, as well as the release of the other jailed journalists and human rights defenders in Azerbaijan. The coalition also calls for the Azerbaijani government to take immediate and concrete steps to improve the broader human rights situation in the country, particularly in the context of the upcoming November parliamentary elections. Without independent media coverage, including critical voices such as Ismayilova’s, the elections cannot be considered free and fair. Finally, Sport for Rights calls for greater vigilance by the international community to developments in the country, and increased efforts to hold the Azerbaijani government accountable to its international human rights obligations.

This letter of concern was sent to Mr. Ramil Huseynli, Chargé d’Affaires at the Embassy of the Republic of Azerbaijan to Canada.
Cc: Mr. John Holmes, Ambassador of Canada to Turkey, Georgia, Azerbaijan and Turkmenistan;
The Honourable Rob Nicholson, P.C., Q.C., M.P., Canadian Minister of Foreign Affairs