Journalism is being criminalized in Canada. Here’s how we’re fighting back. 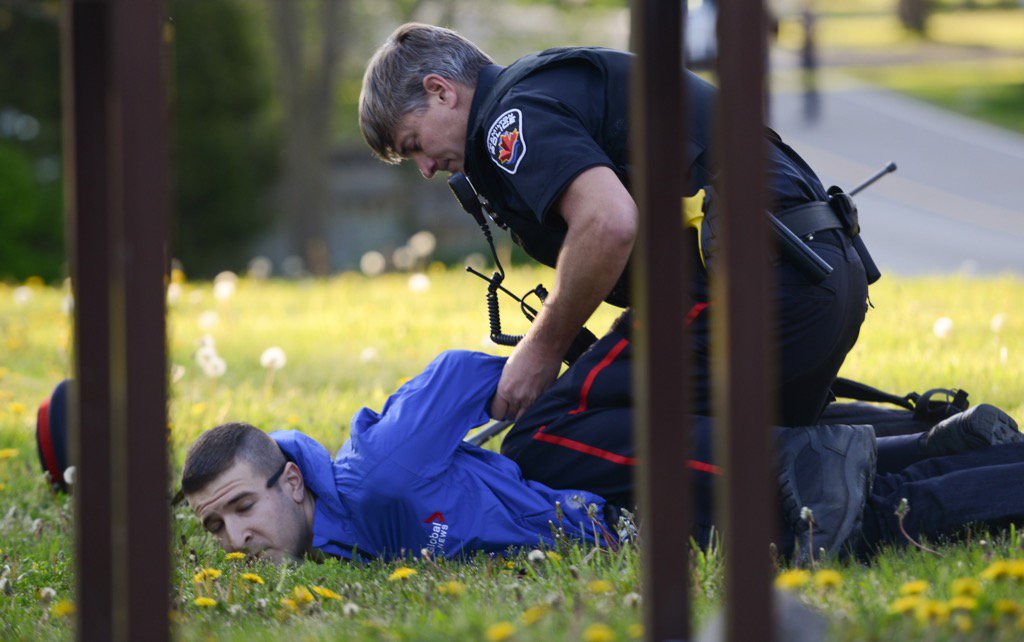 “We respect journalists in this country. They ask tough questions, and they’re supposed to.”
—Justin Trudeau in 2015, addressing a Liberal supporter who heckled a journalist for asking Trudeau a question.

“People have died for the freedom of the press. It’s a fundamental freedom.”
—Québec Premier Philippe Couillard in 2016, addressing revelations that police in the province monitored journalists to uncover the identity of confidential sources.

When it comes to defending the freedom of the press, our elected representatives talk a good game. It wasn’t long ago that Prime Minister Justin Trudeau invoked the critical role that journalism plays in our democracy, or that Québec Premier Philippe Couillard paid homage to those who have died for the right to report the news without state interference. But when called upon to take concrete action to protect journalists from the overreach of law enforcement, corporate censorship and other threats to the free press, politicians are often reluctant to walk the walk—or worse, choose to sit on the sidelines as the few protections Canadian journalists have under the law are eroded through police actions and legal precedents.

No matter how you slice it, 2016 and 2017 have been devastating for journalism in Canada. In the past year, journalist Justin Brake was threatened with arrest, criminally charged, and now faces up to 10 years in prison for reporting on a protest. Two journalists were arrested in Hamilton while reporting at a crime scene. An Ontario judge upheld a lower court ruling that would force VICE News journalist Ben Makuch to hand over his communications with a source to the RCMP, repurposing his groundbreaking journalism as police work. Le Journal de Montréal journalist Michael Nguyen had his laptop seized by Québec police for reporting a story about a provincial judge, indicating that even the most cursory investigations of the state will not be tolerated, but punished. Perhaps most worrying of all was the revelation that police in Québec had been monitoring and tracking the movements of at least eight journalists in the province for years—not as part of criminal investigations, but to discover the identities of their confidential sources. The surveillance was approved by provincial justices of the peace, a disturbing revelation showing that in some cases, respected journalists are considered no more privileged than criminal suspects by those who enforce our laws.

These stories have contributed to simmering public anger, as Canadians become aware of what journalists across the country already know: that the criminalization of journalism in Canada has been picking up steam in recent years. Attempting to cool the sentiments of the public, several politicians have reacted with strong statements in support of journalism, but so far, they have done nothing to stop the persecution of journalists. Ironically, only the unelected Senate has proposed legislation to protect journalistic sources.

This is why CJFE, in partnership with other press freedom advocates, has stepped up on multiple fronts to demand that journalists be afforded the legal and professional protections they require to safely and effectively do their jobs. Any less would be undeserving of the hard work done by Canadian journalists and would send a message of acquiescence to power to our fellow journalists in other countries who face repression—or worse—on a daily basis.

Our efforts are just beginning, and already we are seeing results, but it will take determination and endurance to defend Canadian journalism in the long term. It will also take more resources, and your support. That’s why we’re launching an ambitious crowdfund to sustain the fight into 2017.

Click here to donate to our crowdfunding campaign today.

Below are some of the most important press freedom battles that have played out across the country since 2016, and what CJFE is doing to safeguard the future of journalism in Canada.

It’s a shocking story that gained global attention. Late in 2016, Montréal police admitted that they had monitored the communications and movements of La Presse journalist Patrick Lagacé for months through his iPhone. Lagacé wasn’t under investigation for a crime; the police just wanted to find out the identities of Lagacé’s confidential sources for stories he had written about internal problems in the Montréal police force. When the revelations about the spying broke, journalists and the public were outraged, and the political fallout was immediate. Within weeks it was revealed that at least 24 surveillance warrants were granted to Montréal police against Lagacé in 2016 alone.

It didn’t end there: Radio-Canada discovered that Québec’s provincial police force had obtained warrants to track the phone calls of at least seven other journalists, including three of their own, in 2013. As Lagacé has stated, police surveillance of journalists to discover their confidential sources is “indefensible.”

What is CJFE doing: CJFE partnered with civil and media rights organizations to demand that the federal government launch a public inquiry into the freedom of the press in Canada. We are leading efforts to pass a press shield law (Bill S-231) that would protect journalists from being spied on in the future, travelling to Ottawa to lobby the government, and writing editorials in national newspapers.  We also organized a nationwide rally for press freedom and launched a letter-writing campaign to the Prime Minister. The spying on journalists that took place in Québec perfectly demonstrates why journalists in Canada need to be protected by legislation, and shows just how precarious the situation is for our free press.

In October 2016, Indigenous Canadian activists cut the lock on a gate surrounding a controversial hydroelectric project in Newfoundland, entered and occupied the site in an act of civil disobedience to protest the toxic pollution that the project will create if built as planned. Journalist Justin Brake, reporting for The Independent,  accompanied the activists as they entered and stayed with them onsite for several days, becoming the only reporter to tell the inside story of the protest. He left the site after being named in a court order—based on an affidavit made by Nalcor, the Crown corporation developing the project—requiring everyone occupying the site to leave or face arrest. But that didn’t stop the RCMP from arresting and charging Brake with mischief and disobeying an order of the court, charges that carry a maximum sentence of 10 years in prison. These charges could set a disturbing precedent for the prosecution of journalists in Canada.

Prior to his arrest, Brake was nominated for a 2016 Human Rights Award by the Newfoundland and Labrador Human Rights Commission for his journalism—the same work that has led to him being criminally charged.

What CJFE is doing: CJFE has partnered with Reporters Without Borders (RSF), the Canadian Association of Journalists (CAJ) and APTN to intervene in Brake’s appeal case. CJFE, RSF and CAJ also launched a public petition to have all charges against Brake withdrawn. To date, more than 2,300 Canadians have signed. We’ve also written to the Crown Attorney, the RCMP and Public Safety Minister Ralph Goodale to make it clear that the charges against Brake are unacceptable and must be dropped.

In 2015, VICE News reporter Ben Makuch brought a critically important story to Canadians’ attention when he interviewed Farah Shirdon, a young man from Calgary who allegedly fled the country to join ISIS. Makuch’s communications with Shirdon provided an unprecedented look into the motivations of a Canadian who joined a terrorist organization responsible for horrific crimes. The RCMP responded to this journalistic achievement by serving VICE News and Makuch with a production order demanding all records of Makuch’s communications with Shirdon. (There was no legal necessity for the order, since Shirdon had already been charged with several crimes in absentia by the RCMP.) The order attempts to repurpose Makuch’s journalism as a de facto police investigation, a practice that free press advocates around the world recognize as detrimental to both journalism and democracy.

VICE and Makuch appealed the order, but an Ontario Superior Court judge upheld it in March 2017. Makuch’s ordeal is a stark reminder of why we must continue to fight to ensure that journalists can do their jobs without fear of being forced to act as agents of law enforcement.

What is CJFE doing: CJFE acted as an intervener in the court battle between VICE News and the Crown, alongside the Canadian Civil Liberties Association, CBC, Centre for Free Expression, RSF and other advocacy groups. Together we fought to support Makuch’s position before the court and continue to demand that the production orders be dismissed by the courts. We rallied outside the courthouse to show solidarity with his fight to protect press freedom, and held a press conference on Parliament Hill that received international media attention for his case.

In June 2016, reporter Michael Nguyen of Le Journal de Montréal wrote a story about a constable in a Montréal courthouse who had filed a formal complaint against Judge Suzanne Vadboncoeur, alleging the judge had verbally berated and insulted the constable and his colleagues in 2015. After reviewing the complaint, Québec’s judicial council reprimanded the judge. But Le Journal de Montréal managed to publish stories about the complaint before the Council made the evidence available to the public; through a simple Google search, Nguyen discovered a video of the incident on the Council’s website. The council alleged to police that Nguyen had illegally accessed the council website to find the video—a claim that was later proven false by La Presse—leading Québec provincial police to obtain a search warrant for Nguyen’s laptop and seizing it from Le Journal de Montréal’s offices. Despite the integrity of Nguyen’s story and his investigative methods, a Québec Superior Court judge upheld the legality of the search warrant and dismissed an appeal.

What is CJFE doing: As Nguyen’s story came to light, we strongly condemned the actions of Québec’s provincial police and judicial council. We urged the council to return the seized laptop to Nguyen and to not examine its contents

While 2016 was a year of setbacks for journalism in Canada, the reality is that 2017 isn’t shaping up to be any less challenging. CJFE will continue to be at the front lines of press freedom across the country, and we’re committed to defending the work of courageous journalists everywhere. But it takes significant resources to stand up to the government and police when our freedom are threatened. Now more than ever, we need your support to continue our work.

Will you donate today to help us fight for freedom in Canada?

Nathan Munn is a writer and editor based in Montreal, Quebec.