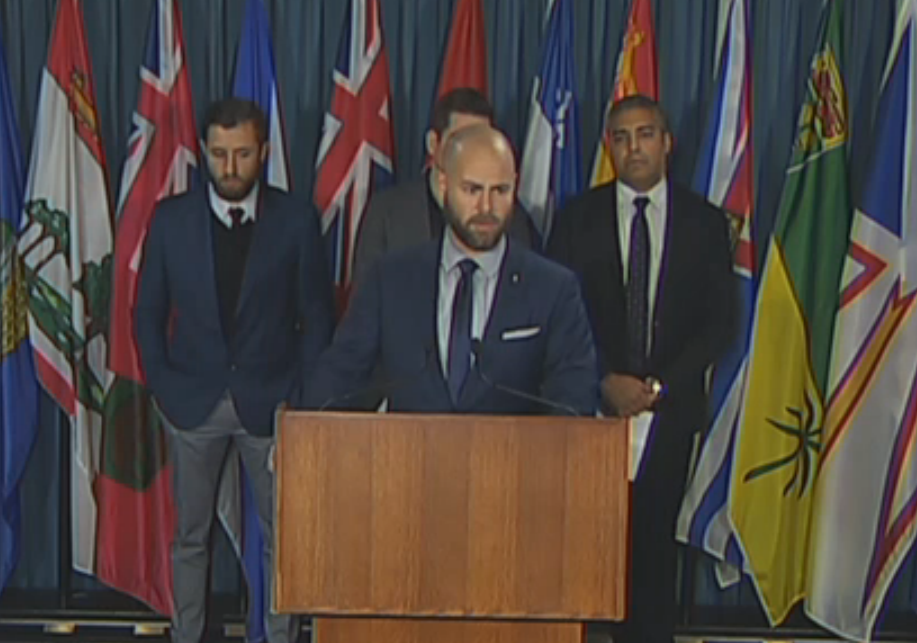 Canadian journalists and free speech advocates are calling on the Trudeau government to take steps to protect press freedom in Canada.

The call follows recent revelations that ten Quebec journalists were under police surveillance in order to ascertain their sources, and the ongoing case of VICE News journalist Ben Makuch, who in 2014 was served with an RCMP production order to obtain his KiK messenger chat logs with a suspected ISIS member. The case is up for appeal in February of 2017.

“Source protection is crucial to our ability to do our jobs as journalists. It’s a fundamental tool of the trade that allows us to dig deep and hold the powerful accountable,” said Makuch.

“Mine is just one of many recent cases of the growing erosion of press freedom here in Canada. I’ve covered oppressive regimes across the world and the last opposition I thought I’d face in my ability to do my job would be here at home in Canada.”

Makuch was joined by journalist and press freedom advocate Mohamed Fahmy, who appealed directly to Prime Minister Trudeau to take action on this important issue.

“A report issued in September 2016 by Reporters Without Borders states that Canada dropped 10 spots on 2016 world press freedom index after the 'dark age for journalism' during Mr. Stephen Harper's tenure,” said Fahmy.

“Prime Minister Trudeau, you stood beside me during my wrongful imprisonment and championed the cause of press freedom. I have faith that you will do the same for fellow journalists facing similar threats to press freedom in Canada. The world views Canada as the pillar of democracy so let's keep it this way.”

La Presse journalist Patrick Lagacé, who it was recently revealed was one of the ten Quebec journalists under surveillance, made a similar appeal to the government.

“It was a shock for me to find out a couple of weeks ago that my phone was being surveilled by the Montreal police all in an effort to find out who my sources are,” said Lagacé.

“My Province seems to be taking this issue seriously, I hope the Federal government will also take a leading role. Our Prime minister has famously said during the last election campaign that journalists are to be respected in this country: now is the time to go beyond words and take action.”

Tom Henheffer of Canadian Journalists for Free Expression laid out his organization’s specific legislative asks of the government.

“This is a watershed moment, and one where Canada has the potential to be a global leader, or to further cripple the free press in our country,” said Henheffer.

“We call on the government to make several changes to protect press freedom and free expression in Canada. They include, passing press shield laws, repealing the dangerous surveillance provisions contained in bill C-13 and ensuring that Federal and Provincial governments require any warrant for surveillance of journalists be requested by prosecutors, as opposed to police, and approved by judges, as opposed to justices of the peace.”

The promos, which feature Mohamed Fahmy and Patrick Lagacé, will run on VICE Canada’s digital and television platforms in the coming days.