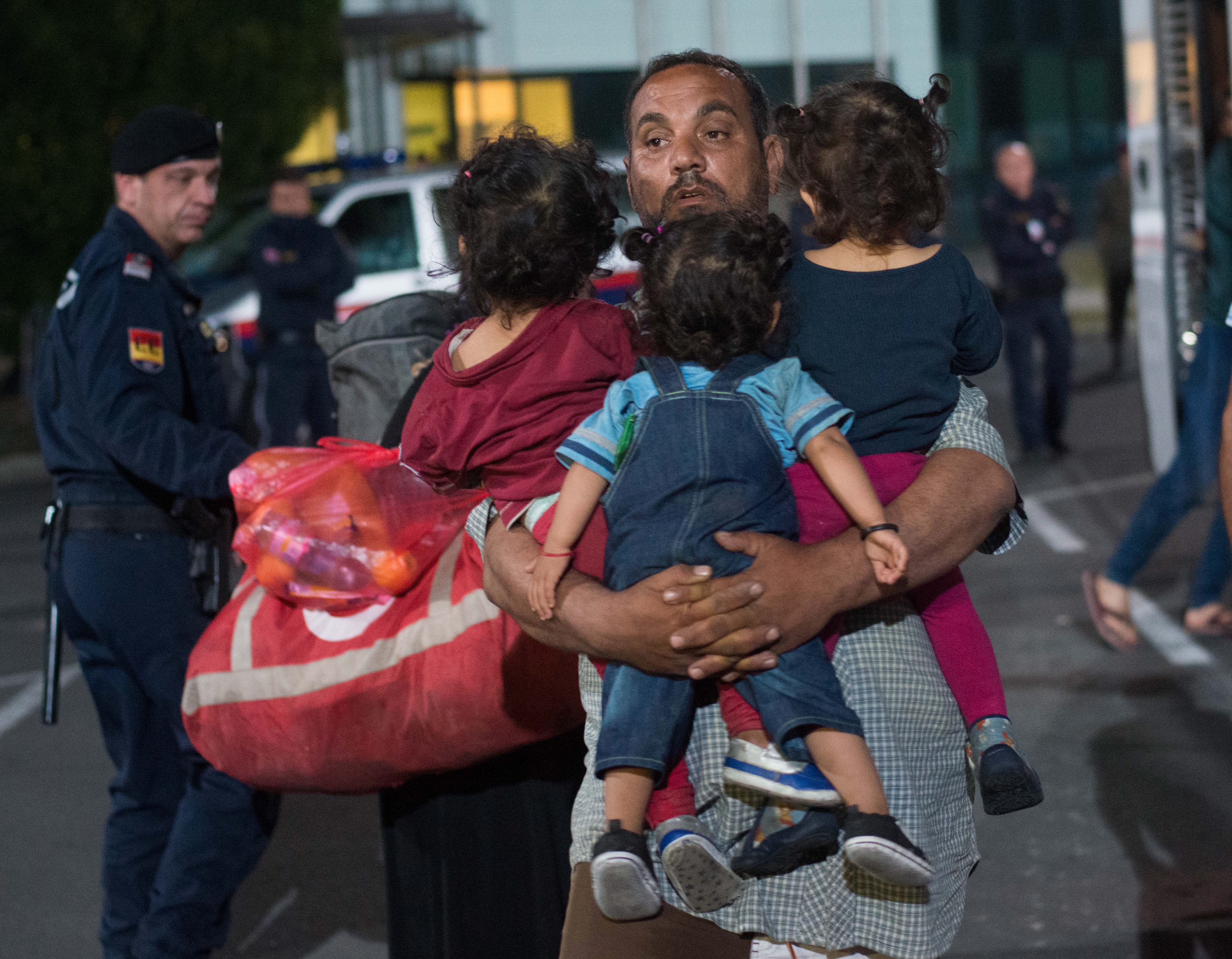 A migrant carries his three children as he arrives at the border. PHOTO: AP/Christian Bruna

In the last month, human rights organizations and journalists reporting on the police-run migrant camps in Roszke, Hungary—close to the Serbian border—have increasingly had their press freedom rights and their ability to accurately report on the refugee crisis infringed upon.

Journalists have been repeatedly denied access into the camps, which were set up for the increasing number of Syrians, Iraqis, Afghans and more seeking refuge from the conflicts in their home countries. Members of the public have only been allowed access to the “collection ground:” an outdoor area close to the border where asylum seekers have been gathered by the police before being moved into the camps. On September 2, Hungary’s National Police rejected a formal request from Human Rights Watch to visit the refugee camp, on the grounds of “interference with police procedures.”

Violations of press freedom through different measures have increased in recent weeks. On September 12, an Associated Press journalist was ordered by police to delete footage of an incident where a police officer was filmed letting a police dog attack an asylum seeker.

On September 16, the same day as police violently responded to a riot as migrants attempted to cross the border, journalists were reportedly beaten by Hungarian police forces. Australian photographer Warren Richardson, Polish reporter Jacek Tacik, and a Slovakian journalist were among those beaten and accused of crossing the Hungary-Serbia border illegally as they followed a group of refugees into Hungary.

A TV crew covering the situation for Radio-Television of Serbia (RTS) was also viciously attacked by police forces with batons that day at the Horgos border crossing in Serbia. In a call against impunity, RTS has penned a demand to the Hungarian government bring to justice the police officers that attacked the journalists.

“It is incomprehensible to see an EU country like Hungary constantly violating press freedom and human rights,” stated Mogens Blicher Bjerregaard, President of the European Federation of Journalists. “The European Commission and international institutions must take action against these serious violations, It is a prerequisite for EU member states to respect the EU Charter on fundamental rights which sets out standards on media freedom and freedom of expression.”

According to Human Rights Watch, the Roszke transit camps were open only to the Hungarian Helsinki Committee (HHC) due to a border monitoring agreement between HHC, UNHCR and the Hungarian police. However, HHC is only allowed access once a month, and the information provided to the public by HHC is currently being censored, as the cases are being dealt with behind closed doors.

“[The Hungarian government] would choose what kind of journalists from what kind of TV can enter,” said CJFE’s anonymous UNHCR source. “Pro-government Hungarian TV stations will be allowed to attend court cases and press conferences [concerning migrant rulings]. If it is a TV station that is critical of the government, they won’t be invited. There are restrictions on the amount of information disclosed. Information has to pass through certain levels of government sections that check what can be leveraged for public information. The whole procedure is being censored.”

Censorship of information surrounding migrants in Hungary is occurring in many sectors. The Hungarian Academy of Sciences sent an internal request asking scientists specializing on migration not to talk to the media about their findings for multiple weeks. The state television in Hungary (MTVA) has also issued an internal rule for editors not to show asylum-seeking children on TV. The government’s reasoning behind this censorship was "showing of minors as refugees would do harm.”

There have been nearly 150,000 migrants crossing into Hungary since the beginning of 2015, with official reports of over 3,000 asylum seekers and migrants arriving through Serbia every day in the past week. CJFE’s anonymous UNHCR source has stated that as many as 11,000 migrants have attempted to cross into Hungary every day in the past week. The authorities at the Hungarian migrant camps have been disregarding the press freedom and safety of the journalists who are attempting to report on the migrant situation. The public has a right to know about the border clashes, the conditions of refugee centres, and how the authorities are handling the asylum seekers, but human rights and press freedom violations are increasingly jeopardizing our right to information.