At least 77 journalists and media workers killed in 2015 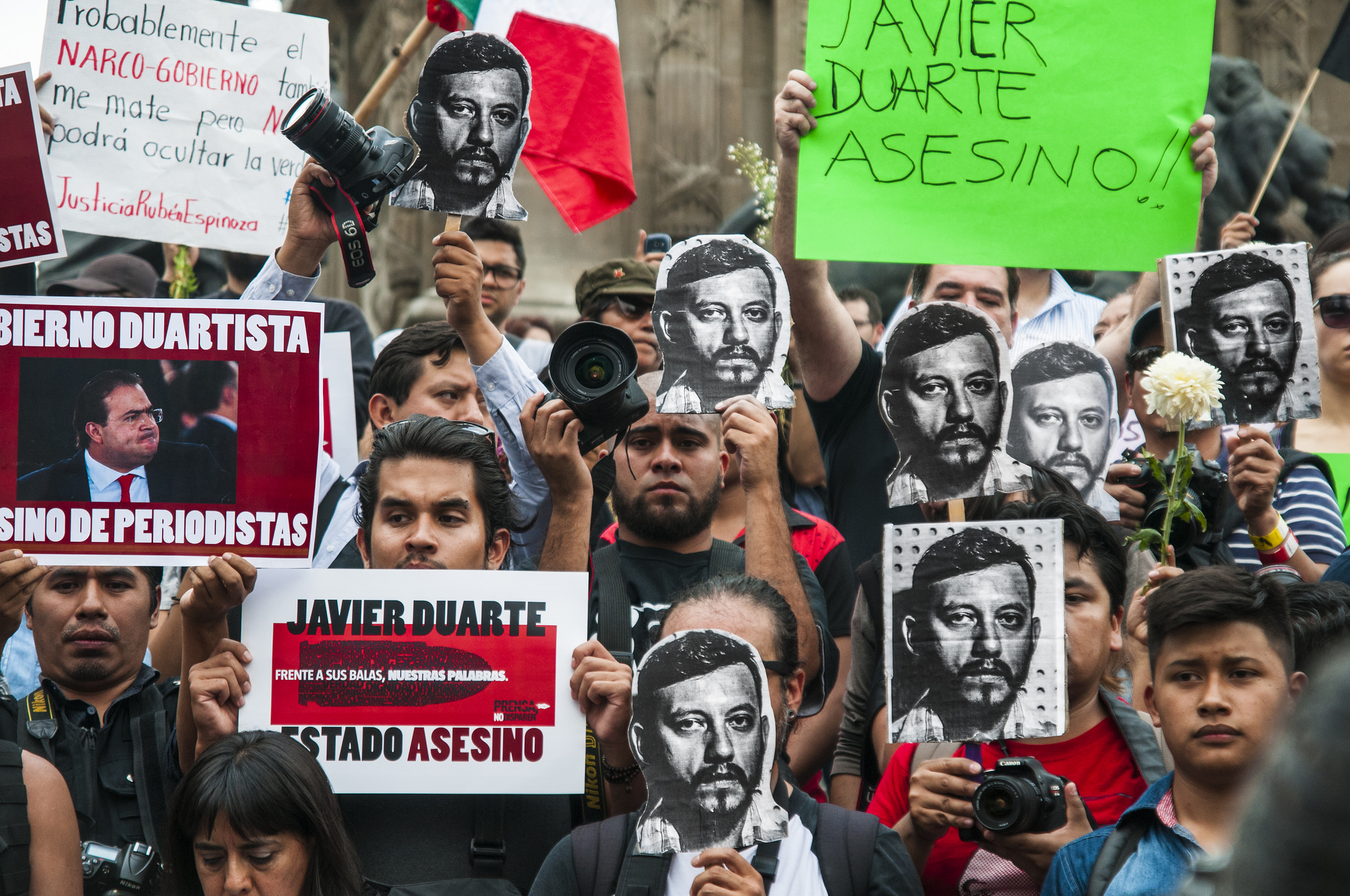 2015 was another grim year for threats and attacks against journalists around the world. According to CJFE’s research, 77 journalists and media workers were killed in relation to their work in 2015. The numbers are down from 2014 (100 journalists killed), but the dangers faced by journalists remain unchanged. Last year saw a continued rise in the targeting of journalists as a means to quell dissent, incite fear and gain publicity. The uptick in notable incidents and trends such as the attack on Charlie Hebdo is alarming, but has only deepened CJFE’s resolve to defend free expression and free press. As we look back at the year that was, we pay respect to the courageous individuals whose lives were lost while bringing truth to light.

2015 began with the tragic attack on the French satirical magazine Charlie Hebdo, where 12 people were brutally murdered, including nine magazine staff, in Paris on January 7. The attackers identified themselves as members of Al-Qaeda’s branch in Yemen. Charlie Hebdo is known for its highly controversial satirical cartoons depicting contentious political and religious issues, including the Prophet Muhammad. The incident became a rallying point for free expression advocates around the world.

Journalist and TV presenter Mohammed Shamsan and three other staff members of Sana’a-based television station Yemen Today were killed in an airstrike on April 20. This attack was part of a military campaign by a Saudi-led coalition of countries against Houthi rebels loyal to Ali Abdullah Saleh, the former Yemeni president who assumed control over much of the country earlier last year. It is reported that the station was deliberately targeted for its coverage that was favourable to the Houthi rebels.

Photojournalist Rubén Espinosa was murdered on July 31 in Veracruz state, after fleeing Mexico City due to threats and harassment. He reported being followed after publishing a compromising photo of Veracruz governor Javier Duarte in 2014, and was found dead a year later in an apartment along with his friend, social activist Nadia Vera, two roommates and a housekeeper. A convicted rapist was arrested in relation to the killings; however, it is widely believed that this arrest was a sham in order to suppress public outcry. Officials stated that the motive for the murder was robbery and not related to the threats and attacks Espinosa had previously faced because of his work.

TV reporter Alison Parker and cameraman Adam Ward were murdered on August 26 during a live broadcast in Virginia. They were killed by a former colleague who later shot himself during the ensuing police chase. The killer had publicized his crime on social media following the shooting. This incident marked a harrowing global trend in 2015­ of journalists being targeted to gain publicity.

Religious fundamentalism has grown in Bangladesh, and with it an increasingly disturbing trend of extremists killing secularist and humanist writers with impunity.  Extremist groups are reported to be responsible for the brutal hacking deaths of four secular bloggers and a publisher in 2015. Ansar al-Islam (Ansarullah Bangla Team), a local affiliate of Al-Qaeda, published a global hit list that targets secularists in Bangladesh and abroad, and have claimed responsibility for some of the attacks on secularists in the past year. All five victims in 2015 had been named on the hit list prior to their murders.

A tragic trend of execution-style killings in Brazil in 2015 was punctuated in August by the on-air murder of radio journalist Gleydson Carvalho in the city of Camocim. Carvalho was known for being an outspoken critic of political corruption in the country. Four other journalists outside of major Brazilian cities were also killed in gruesome manners. In one case, Evany José Metzker, a political blogger investigating a child prostitution ring, was discovered decapitated just outside the town of Padre Paraíso. Press freedom in Brazil is heavily compromised by the economic and political interests of government bodies and powerful individuals, and attacks on journalists are frequent. None of the five cases from 2015 have been resolved.

In Syria, seven journalists were killed in 2015. While this number is down from 18 in 2014, Syria remains one of the most dangerous and deadly countries in the world for journalists. The dangers and threats of extremism and war are increasingly prevalent, and a wide range of extremists are using journalists as a means to gain publicity and notoriety. This trend is occurring throughout the Middle East, particularly in Iraq and Yemen, where four and six journalists, respectively, were murdered in 2015.

The Philippines: Impunity for Killers

Four journalists were murdered in the Philippines in 2015 in an alarming trend of targeting journalists who speak out on corruption and human rights abuses in the country. In August, three were murdered in a span of just two weeks. These killings, as in previous years, have largely gone unpunished; a culture of impunity in the country has been permitted through the failure of officials to pursue those responsible for the crimes. The Philippines continues to be one of the world’s deadliest countries for journalists, with over 100 journalists and media workers killed in the past decade, and the vast majority of these will remain unpunished.

We are saddened by the loss of so many courageous journalists and media workers around the world, and our resolve to protect our rights and stand against impunity are stronger than ever. We remain heartened to see that there will always be individuals who risk their safety and security to bring us the truth.

As we continue to defend press freedom and freedom of expression in 2016, join us in paying tribute to the lives of those we have tragically lost in 2015.

Help fight for freedom of expression and become a member of CJFE. Funds raised through membership and donations support CJFE’s critical work, including our Journalists in Distress Fund that provides emergency assistance to journalists around the world whose lives or well-being are in danger.