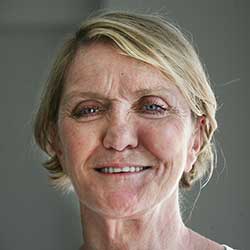 Photo: AP Kathy Gannon serves as special regional correspondent for Pakistan and Afghanistan for The Associated Press. She has covered the region for the AP as a correspondent and bureau chief since 1988, a period that spans the withdrawal of Russian soldiers from Afghanistan, the assassination of Benazir Bhutto, the bitter Afghan civil war between Islamic factions and the rise and fall of the Taliban. Gannon was the only Western journalist allowed in Kabul by the Taliban in the weeks preceding the 2001 U.S.-British offensive in Afghanistan. In addition to her coverage of South Central Asia, she has covered the Middle East, including the 2006 Israeli war against Hezbollah in southern Lebanon, and war in northern Iraq. In April 2014 Gannon was seriously wounded while covering preparations for Afghan national elections when an Afghan police officer opened fire on the car in which she was riding. Her colleague and close friend, AP photographer Anja Niedringhaus, was killed in the attack. A native of Timmins, Ontario, she was the city editor at the Kelowna Courier in British Columbia and worked at several Canadian newspapers before her career took her overseas. She has lived in Israel, Japan, Pakistan and Afghanistan. She is the recipient of numerous awards, including: In 2005 Gannon authored I is for Infidel: From Holy War, to Holy Terror, 18 Years Inside Afghanistan, an examination of the Taliban and post-Taliban period, published by Public Affairs. Gannon is the youngest of six children. Her brother Brian, now retired, and her late brother Lorne were also respected journalists. Her brothers Robert and Terry, both retired, were prominent in their fields and her sister, Patricia Ann, was a nurse in Canada's north for 40 years. Gannon is married to highly regarded Pakistani architect and artist Naeem Pasha, and has a stepdaughter, Kyla Pasha. Follow Kathy Gannon on Twitter @Kathygannon
Tara Singh Hayer Memorial Award
type-award_winners Tara Singh Hayer Memorial Award
Do you like this page?
Tweet