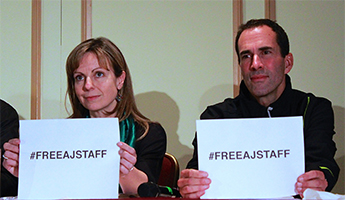 At 1 p.m. EST, CJFE will be joining Al Jazeera English at the Fairmont Royal York hotel for a press conference regarding journalists detained in Egypt, including Canadian Mohamed Fahmy.

Al Jazeera executive producer for newsgathering, Owen Watson, will chair the conference and will be joined by:

Having trouble viewing the live blog below? Click here.