January 23 - 27 is national lobbying week on press freedom and Bill C-51. Here's what you need to participate. 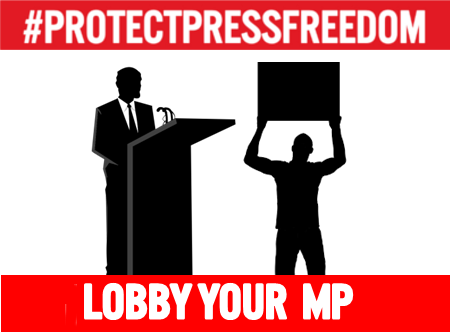 CJFE and a coalition of civil society, media and labour partners are coordinating a citizens' lobbying week from January 23rd to 27th, leading up to a national day of action on February 4th, and we need you to take part.

We are calling on the government to:

This guide covers how to set up a meeting with your federal Member of Parliament (MP), how to prepare, what to say and how to follow up. Learn more about this campaign at ProtectPressFreedom.ca.

February 4th is a national day of action on press freedom, timed to coincide with VICE journalist Ben Makuch’s court date on February 6, 2017. Makuch is challenging an RCMP production order for chat logs between himself and a suspected ISIS fighter. His case will set a precedent in Canadian law for press freedom, journalistic independence and the protection of confidential sources. Makuch’s case is only one instance among a series of recent press freedom violations in Canada.

In September 2016, journalist Michaël Nguyen's computer was seized after Quebec's judicial counsel falsely claimed that information he published was obtained illegally from their website. In November 2016, La Presse reporter Patrick Lagacé revealed that he has been the subject of Montréal city police surveillance since the beginning of 2016. Days after his revelation, at least six other journalists learned that they had been the subject of Quebec provincial police surveillance in 2013. A recent national poll found that only 11% of Canadians believe it is acceptable for police to monitor journalists to find their sources, while 70% believe that placing journalists under surveillance undermines press freedom.

In contrast to these issues, senate Bill S-231 has been introduced, which would create a press freedom shield law. This law would protect Canadian journalists from precisely the type of fundamental press freedom violations these journalists have been exposed to. 70% of Canadians support the federal government creating a press shield law.

At the same time, civil society groups in Canada are preparing for the federal government to introduce long awaited amendments to the reckless and ineffective Anti-terrorism Act, 2015 (formerly Bill C-51). Private member’s bill C-303 has been introduced in the House of Commons, which would, when implemented, constitute a line-by-line repeal of the Act. A recent poll found that only 56% of Canadians believe security and intelligence agencies safeguard and respect citizens’ rights.

During the recent consultations on our national security framework, Canadians learned that the government is proposing a whole new set of police and intelligence agency powers for mass surveillance. Recent reports show police have, without any suspicion of wrongdoing, routinely spied on Indigenous activists and Muslims, among others, in the name of promoting national security or furthering criminal investigations. The proposed powers would make these abuses worse. The same poll showed that 74% of Canadians believe the government should require a warrant to access sensitive, personal information.

The government need to hear from you.

Why Lobby Your MP?

We all have the power to shape and influence government policy through lobbying. Your MP is elected to represent your interests, and it is your right to meet with them to discuss your concerns. Lobbying your MP may seem daunting but it’s actually pretty easy and a great way to help make change happen.

Step 1: Find your MP
You can find your federal MP and local constituency office by entering your postal code on OpenParliament.ca.

Step 2: Make an appointment
The easiest way to make an appointment is simply to call up the constituency office. MPs receive piles of letters and emails, so you may not get a timely response if you write.

Ask to speak to the MP’s assistant, explain that you are a constituent and would like to meet with your MP, and briefly explain the reason for the meeting. Ask for an appointment at their constituency office during the week of January 23-27.This is the last week before MPs return to Ottawa and the House of Commons resumes sitting.

Step 3: Prepare your statements
Before you meet with your MP, familiarize yourself with the issue, research your MP and prepare what you will say. Read up on the key messages and Background Briefing of the campaign at ProtectPressFreedom.ca.

Step 4: Be concise and clear
Arrive a few minutes early, and consider bringing along a friend who can provide another perspective during the conversation. Identify yourself as a constituent, and get your message across in a clear, courteous and concise manner:

Be up front about what your MP needs to do, and concisely explain why. Crucially, try to get them to give a specific commitment. Make your lobbying asks clear by phrasing them as direct requests. For example:

Ask if you can get a picture taken with your MP. Share it on social media with the hashtag #ProtectPressFreedom, and remember to tag @canadaCJFE!

Step 5: Follow up after the meeting
As soon as possible after the meeting, send a letter or email to thank your MP. In your letter you should also summarize what was said. This will remind them of the issues you discussed and any actions they have said they will take.

Keep up to date on the latest information:

CJFE’s Campaigns Coordinator Duncan Pike can help you lobby your MP. Even if you don’t need help, let us know what you’re planning and how it goes! Call 416 893 2286 x262 or email [email protected]