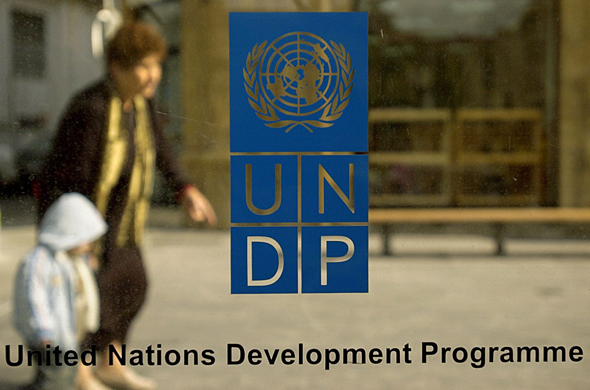 A Greek Cypriot woman with her granddaughter passes in front of a UNDP (United Nations Development Programme) PHOTO: AP/Petros Karadjias

As a signatory to the Lyon Declaration on Access to Information and Development, CJFE celebrates its incorporation into the United Nation’s (UN) 2030 Agenda for Sustainable Development.The inclusion of the Declaration ensures that access to information will be recognized in the framework of the UN’s new sustainable development goals (SDGs). These 17 goals cover 179 targets of economic, social and environmental development for all states to participate in to create a better world for its people.

The declaration, initiated by the International Federation of Library Associations and Institutions (IFLA), was launched in August 2014 and will be officially adopted at the UN Summit later this month. Its inclusion in the SDGs is a result of sustained advocacy work by IFLA in partnership with signatories. By working together to organize events and activities, as well as lobby governments around the world, awareness was raised surrounding the Declaration at the national, regional and international levels.

On September 25-27, heads of state will approve the post-2015 Development Agenda at the United Nations Summit in New York. CJFE commends the success of the Lyon Declaration, and we look forward to the implementation of the 2030 Agenda at the national levels. While this is an important initial step, the need for political will at the national level is necessary to enshrine these principles in legislation. Canada in particular requires significant reform of its access to information system, and this is an opportunity for Canada to modernize its system and bring it in line with international standards.