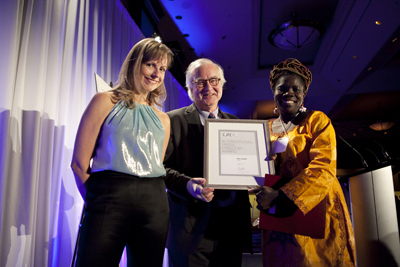 Mae Azango accepts her International Press Freedom Award at the 2012 CJFE Gala: A Night to Honour Courageous Reporting. Watch the video or read her speech below.

Ladies and Gentlemen, I am delighted and grateful that the Committee has chosen to recognize my work with this award. Speaking the truth about female genital cutting in my country has long been a dangerous thing to do but I thought it worth risking my life because cutting has claimed the lives of so many women and girls, some as young as two. We have one of the highest rates of maternal death in the world and cutting is a big factor in that. But parents in our traditional societies were told that cutting was the right and “clean” thing to do. And that their daughters had no future without it. I knew if we started to talk about it and they knew the truth many would choose a different path. As a woman I knew that many women who went through this ritual of as a child are still bitter and resentful. For example; the lady in my story still lives with the trauma of being held down by four women while the fifth lady cut her clitoris off with a knife that had been used on 25 other girls. The 14 year conflict in Liberia claimed the lives of as many as 250 THOUSAND people and left most of our people devastated and at the bottom ladder of poverty. The war went on for so long because warlords were able to take advantage of the absence of truthful media to spread lies and propaganda that turned Liberians on each other. Sometimes they even turned on their own family. We have learned the importance of independent, truthful media the hard way. We do not take it for granted. We understand that information is essential if we are to hold our leaders accountable and make smart decisions about the future of our country. I am very lucky to have the support of one of the few truly independent media houses in West Africa at FrontPage Africa and a brave publisher in Rodney Sieh. Many other media houses would not have had the courage to publish this reporting. Together with New Narratives, the American media project that supports our reporting, we are really changing the face of Liberia. As I usually say, when I was in hiding, I was like a bat hanging from every possible ceiling when night falls because it was risky to sleep in a location for more than two days. I want to thank the international coalition that made sure my story got world attention. The Committee to Protect Journalists, Amnesty International, Nicholas Kristof of the New York Times and others. It really helped during that time to know people around the world were fighting for me. They put so much pressure on the government of Ellen Johnson Sirleaf that they eventually made their first ever public stand against female genital cutting. Since then several political leaders have felt confident to speak against cutting. The government has promised to begin a campaign to sensitize people to the dangers of the practice and find other sources of income for the women who practice it. Because of the international campaign many little girls in Liberia will be saved from this horror. My biggest thanks go to my parents, Robert Azango, a Supreme Court associate justice who was killed by Charles Taylor’s rebels and my mother, Bertha Azango who was an education advocate and changed the lives of so many young children in Liberia. They are the examples that made me to be what I am today. I am sure they're smiling down in pride at me tonight. I would not have done it without my brave editor Joanna Devane who fought with ministers and police to win my protection. Had it not been for Dave and Susan Marcinek and Prue Clarke of New Narratives none of this would have happened. They saw that women journalists are a powerful tool for bringing change in a country like Liberia. They ensured my colleagues and I have the resources, the skills and the financial freedom to report independently. But I am not done! We have a lot of work to do in Liberia. You had better all keep watching and supporting my work. I hope I don't have to face death threats to get your attention again!