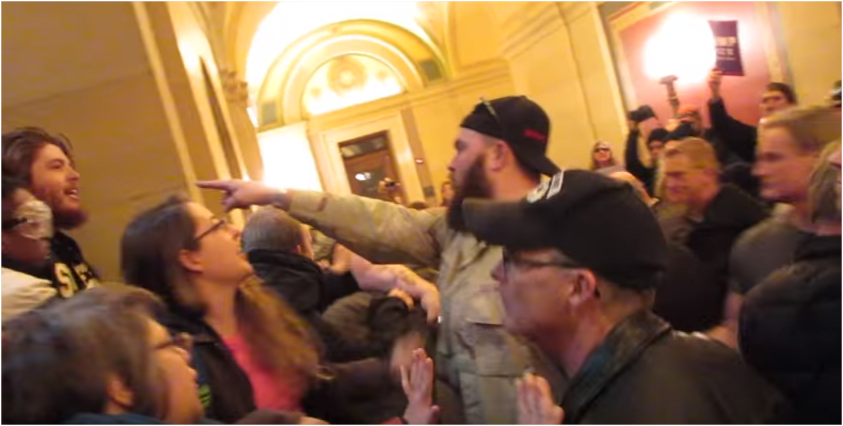 A Trump supporter points out an activist for arrest during a scuffle in the Minnesota Capitol. Source: YouTube/Screen capture

CJFE is calling for immediate consular support for Canadian political dissident Anton Bueckert, who was arrested on August 22 at the St. Clair River U.S.-Canada border crossing. Anton Bueckert, who was on his way to the Burning Man festival, was held for two weeks in a St. Clair, Michigan, county jail waiting for extradition to Minnesota, but when picked up, was transported by the private company Prisoner Transport Service to a hub in Alabama.

Trump supporters are seen attacking a crowd of antifascist protesters, who respond with pepper spray and a taser.

Bueckert faced a misdemeanor disorderly conduct charge in connection with a March 4 demonstration at a Donald Trump rally in Minneapolis, Minnesota, where he and five other activists were alleged to have assaulted a Trump supporter at that protest. Later in March, Bueckert was informed that the charge had been dropped. However, unbeknownst to him, the Ramsey County District Attorney in Minneapolis approved several serious charges, including interfering with police, obstruction of justice and felony rioting, and issued an arrest warrant. Multiple demonstrators are facing similar charges, matching a concerning pattern observed at the presidential inauguration protests of applying blanket felony charges to a group. Bueckert sees the charges as a ‘trumped-up’ effort by the prosecutor to force a plea deal. In a press conference where felony charges were announced, the District Attorney admits public pressure was applied to ‘make this into some form of a partisan issue’. In the same statement he  also defended the impartiality of his office.

Bueckert has told CJFE that he is currently being held at a transportation hub in Alabama awaiting extradition to Minnesota where the warrant was issued. During the drive there, Bueckert alleges mistreatment by Prisoner Transport Services including overcrowding in the vehicle and ‘filthy’ conditions without sufficient bathroom breaks over a four day trip. According to Bueckert, other inmates in transport recorded even worse conditions, confined in 105 degree temperatures with garbage and human waste as they were unable to sleep or relieve themselves for the duration of their transport. Multiple times, they would be advised they were about to be transported to their final destination but instead were driven to a processing hub in Alabama. One inmate is alleged to have been hospitalized with kidney failure during the transportation process.  “These are conditions that if you subjected a dog to, you’d go to jail yourself,” Bueckert said, also noting that he has at present spent three weeks in prison without sign of a trial.

At no point in his three-week detention had he been advised to access consular services or of how to exercise his legal rights as a foreign national in the United States. Bueckert is also due to stand trial in Quebec in October for his alleged role in a protest against the Enbridge Line 9 pipeline.

It is of the utmost importance that consular services be provided for Bueckert and that he be able to return home as soon as possible. CJFE further calls on the Canadian government to investigate allegations of inhumane conditions faced by Bueckert during transportation, and ensure he is not subjected to any politically motivated charges stemming from his protest participation.

A copy of this letter was sent to Louise Blais, Consul General, Consulate General of Canada in Atlanta, United States and to the Honourable Chrystia Freeland, Minister of Foreign Affairs.

Update: This story has been amended to reflect that some of the conditions alleged in transport were reported by a third party to the story and remain unverified.