Media, human rights groups urge Trudeau to call for charges against Turkish journalists to be dropped 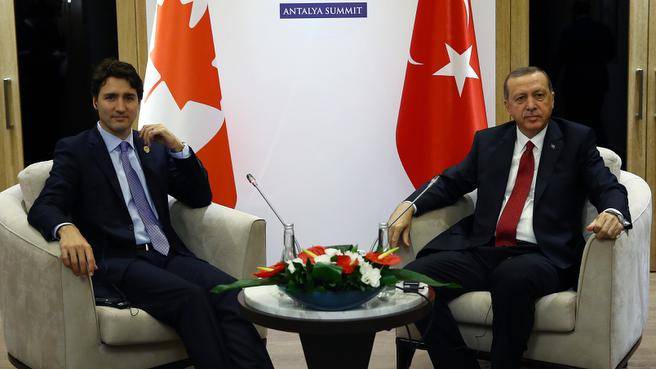 CJFE has joined media and human rights organizations in a letter to Prime Minister Justin Trudeau ahead of the NATO summit in Warsaw, Poland, July 8 and 9. The letter ask for the Prime Minister to call for charges to be dropped against Reporters Without Borders Turkey representative Erol Önderoglu and his two colleagues, Sebnem Korur Fincanci and Ahmet Nesin, as he prepares to meet with Turkish President Erdogan at the summit. The letter was also sent to President Barack Obama by seven other media and human rights organizations.

Canadian Journalists for Free Expression (CJFE), along with the undersigned organizations, would like to draw your attention to the ridiculous terrorism charges being brought against three journalists in Turkey – Erol Önderoglu, Sebnem Korur Fincanci and Ahmet Nesin.

As you are about to travel to Poland July 8 and 9 for a NATO summit, we ask that you urge Turkish President Erdogan to call for all charges against Önderoglu, Fincanci and Nesin to be dropped, to reform Turkey’s anti-terrorism laws that are being used to prosecute journalists and human rights defenders who are merely doing their job, and release all remaining journalists in prison.

A leading defender of freedom of information in Turkey, Erol Önderoglu has been RSF’s Turkey representative for the past 20 years. He has written many of our organization’s reports and he covers Turkish free speech issues for the Bianet news website. A valued council member of IFEX, the global network defending and promoting free expression, he is often consulted by the Organization for Security and Cooperation in Europe (OSCE) and many other international organizations. He is also very well known in his country.

Sebnem Korur Fincanci is a journalist, writer and professor of medicine, and she heads Turkey’s leading human rights NGO, the Human Rights Foundation of Turkey (TIHV). Ahmet Nesin is a well-known journalist and writer who heads the Nesin Foundation. Created by leading author and playwright Aziz Nesin, it helps children in difficulty.

Önderoglu and his two colleagues were arrested and placed in pre-trial detention on June 20 because they showed support for the Kurdish daily Özgür Gündem by symbolically acting as its editor-in-chief for one day. They have been charged with “terrorist propaganda,” “incitement to commit a crime” and “praising a crime or a criminal” on the basis of articles published on May 18, May 30 and June 7 about power struggles within the various Turkish security forces and about the ongoing military operations against Kurdish rebels affiliated with the Kurdistan Workers’ Party (PKK) in southeastern Anatolia.

They spent more than ten days in pre-trial detention until Önderoglu and Fincanci were released on bail on June 30. Their colleague Nesin was released the following day. None of the charges against them have been dropped and they are still facing prison terms of up to 14.5 years. Önderoglu and Fincanci’s first trial hearing is set for November 11.

The legal proceedings against them are a direct continuation of the aggressive approach to the media seen in the proceedings against well-known journalists Can Dündar and Erdem Gül launched in June 2015. They are indicative of the way the authorities are cracking down on Turkish civil society and are misusing the country’s draconian anti-terrorism law.

Ranked 151st out of 180 countries in RSF’s 2016 World Press Freedom Index, the Turkish government is intensifying its repression of journalists. After his release on June 30, Önderoglu told RSF “our arrests show that the traditional harassment of journalists is being progressively extended to all civil society critics. At a time when the Turkish authorities are trying to restore their credibility with European institutions, their respect for international legal standards of freedom of expression is long overdue.”

There is still much more that must be done for Önderoglu and his colleagues. While they never should have spent a single day in detention to begin with, we strongly believe that the international outcry caused by their arrest played a role in their release.

Since becoming Canada’s Prime Minister you have re-affirmed your country’s commitment to human rights. Now we are counting on you to demonstrate this commitment to freedom of expression and information in Turkey alongside your friend and ally, President Barack Obama of the United States of America, whom we have also contacted on this matter.

I thank you in advance, Prime Minister, for the careful attention you give to this letter.