Montreal police and journalists pledge to cooperate during protests 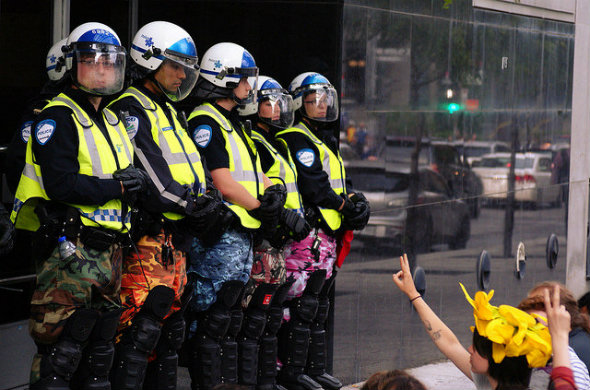 Protests and demonstrations in Montreal have been chaotic, and both protesters and police have gone too far in some instances, resulting in injuries on both sides. Unfortunately, journalists have been caught in the middle. Many have been arrested, injured and kettled in violation of their rights. Many independent journalists have been denied access to cover marches and protests while their colleagues from larger outlets are able to pass through police lines.

Every citizen has a right to free expression, and the press must be able to report in an unobstructed manner. CJFE acts to ensure the media in Montreal is fully able to do their jobs without having their rights infringed on. That said, rights do have limits, and both public and individual safety can come under threat if a protest turns violent.

On Monday, September 21, CJFE moderated a meeting between members of Montreal's independent media and the Montreal police service (SPVM) to discuss the mistreatment of journalists covering protests. This meeting brought the press and police together to ensure cooperation moving forward, with a mutual respect for each other's work and safety.

The police were apologetic about past incidents where officers assaulted or unjustly detained journalists. They offered to provide the press with written “ground rules” to minimize the chance of becoming a target during a demonstration, and invited them to a briefing about police tactics so journalists can better understand police movements and know when to get out of the way. Police also agreed to treat independent and community media organizations with the same respect, and grant them the same access, as larger mainstream outlets.

Members of the independent media pledged to obey all police orders and avoid any obstruction of police work in Montreal during protests. Finally, both sides agreed to open lines of communication so journalists and commanding officers can reach each other when problems occur.

This meeting was the start of an ongoing conversation between CJFE, SPVM and Montreal’s independent media. A number of protests are anticipated in the coming months, and we are hopeful that all parties will act respectfully of everyone’s rights and ensure the safety of journalists, protestors and police alike.

To report on accountability, CJFE will have independent monitors at the protests to witness and document interactions between police and journalists. Past interactions have involved far too many rights violations and aggressive actions meted out on the press. This must stop, and this initial meeting represents an important step toward ensuring the safety of journalists exercising their constitutional rights on the ground in Montreal.