Montreal Police Making Improvements, But There is Still Work to be Done 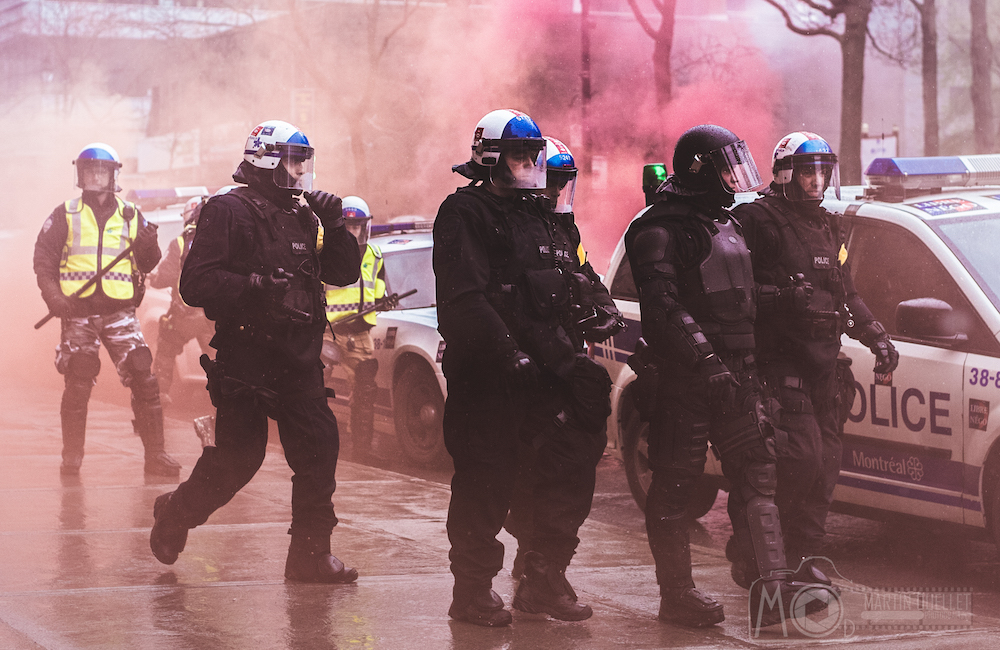 Police at the 2016 May Day demonstrations in Montreal surrounded by a cloud of tear gas after clashing with protesters. CC BY | MOD

Since 2012, there have been multiple well-documented cases of journalists in Montreal from both independent and mainstream media outlets being targeted for arrest, assault or detention by police during their coverage of protests.

In September 2015, CJFE responded to these targeted attacks by moderating a meeting between Montreal police and independent journalists, where both parties pledged once and for all to cooperate during protests. Since that pledge, CJFE has received unconfirmed reports from within the journalism community that the police have been more peaceful at rallies and public gatherings in the city. Following up on a promise to independently monitor interactions between police and journalists, CJFE’s Executive Director Tom Henheffer attended the 2016 May Day protests in Montreal to see firsthand whether they were honouring their commitments.

More than 80 people were arrested at the 2015 May Day protests in Montreal. Over 1,000 protesters attended this year’s rally, and the police presence was heavy, including officers on bicycles and horseback.

Unfortunately, the rally quickly escalated into violence. After a single peaceful hour, protesters began to throw rocks, fireworks and other projectiles at the police headquarters. The police responded with tear gas and rubber bullets, and at least 10 people were arrested.

However, there was a notable difference from previous years in how the police were behaving towards members of the press. According to Henheffer, “The police were not assaulting journalists, which is great. It seems like they heard our message and they heard the outcry from civil society and the people. I was really impressed with how restrained they were overall.” There were no known reports of arrests, assaults or detentions of press members or citizens who were documenting the day’s events.

However, there were reports of police officers preventing members of the press and the general public from taking photographs or filming, particularly during protestor arrests. Henheffer experienced this firsthand when filming an arrest:

“As soon as we began recording the police started yelling and blowing their whistles incredibly loudly, and pushing us back with their bikes. They forced us to back up way further than was necessary, maybe 150 feet. It was a full block, which is outrageous and impedes on the journalists’ ability to document and report on protest incidents.” ”

For their part, members of the media seemed to be honouring their commitment to obey police orders and avoid any obstruction of police work. According to Henheffer, “Every journalist I was with was 100% professional even though the police were unjustifiably forcing them back much further than necessary. Nobody talked back to the police. They were all civil and well behaved.”

Interactions appear to be moving in the right direction; Both the Montreal police and members of the media should be applauded for their collective restraint and respect for each other at these protests. However, if the aim is a truly free press, police must not unjustifiably restrict journalists from recording protests (and particularly arrests) by forcing them beyond a reasonable distance. 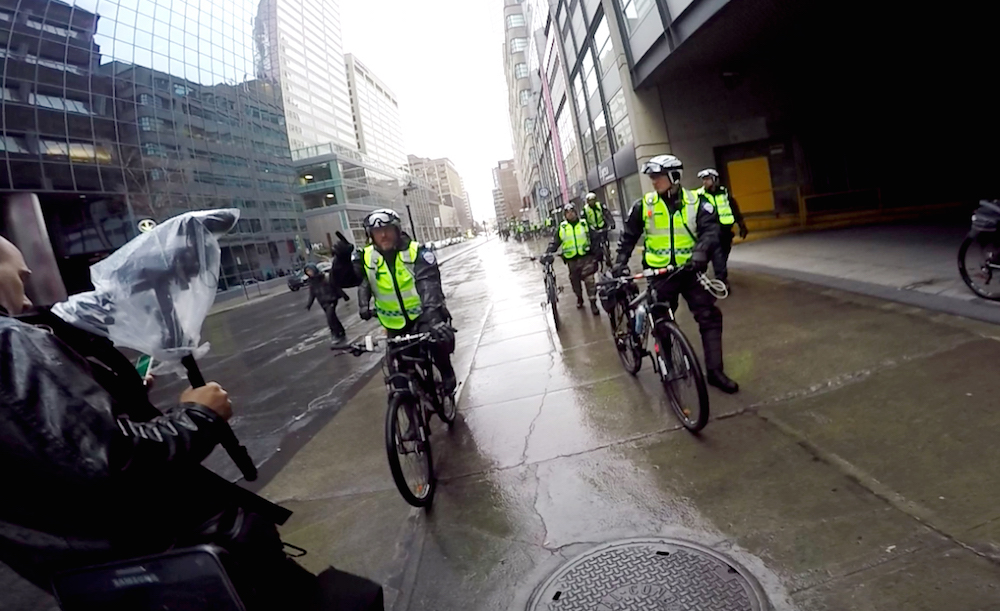 Montreal police force journalists back over 100 feet to prevent them from filming an arrest. Photo: Tom Henheffer