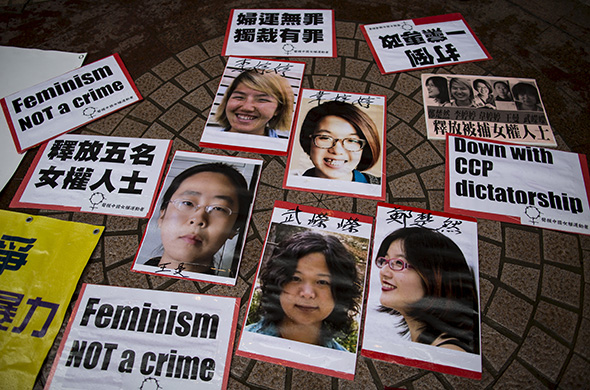 Portraits of Li Tingting (top L), Wei Tingting (top R), (bottom, L-R) Wang Man, Wu Rongrong and Zheng Churan, also known as the Feminist Five, are pictured during a protest calling for their release in Hong Kong April 11, 2015. The women were taken into custody on the weekend of International Women's Day, March 8, and later detained on suspicion of "picking quarrels and provoking trouble." PHOTO: REUTERS/Tyrone Siu
By Violet Rusu June 4 marks the 26th anniversary of the 1989 crackdown in Tiananmen Square, Beijing, that left 500 to 2,600 dead during pro-democracy protests. The exact number of casualties remains unknown since the Chinese government refuses to acknowledge that the massacre occurred. The communist administration exerts strict control over the flow of information in the country; China’s censorship regime covers not only traditional forms of media, but also digital spaces for free expression. The “Great Firewall” restricts forms of social media with user-generated content, such as Facebook, Twitter and Instagram, as well as critical websites and blogs, in order to stamp out dissent and maintain public order. In a report on the world’s “10 Most Censored Countries,” the Committee to Protect Journalists (CPJ) ranked China as the eighth most censored due to the strict internet censorship in place and the government’s obsessive control of the press. While mention of the 1989 bloodshed is banned in mainland China, people gather in Hong Kong’s Victoria Park for a yearly vigil. Despite the tens of thousands in attendance at each vigil, Chinese authorities step up censorship efforts in the weeks leading up to the anniversary of the Tiananmen Square massacre. In advance of the 25th anniversary last year, Sina Weibo, a Chinese microblogging application similar to Twitter, blocked several phrases linked to the event, including "Tiananmen," "six four," "tank," "candlelight" and "today”. It is estimated that up to two million people are hired each year to monitor internet activity in China in advance of the anniversary with the aim of preventing the tragedy from being memorialized on social media. While the Chinese government has attempted to police microblogging sites and traditional media with equal gusto, international support through social media has aided two recent movements for social change: Hong Kong’s “Umbrella Revolution,” and the Beijing women's rights campaign that landed five female activists in prison.

Hong Kong’s student-led Umbrella Revolution began on September 26, 2014, as a small sit-in called Occupy Central with Love and Peace. The pro-democracy movement was established to protest the limits Beijing had imposed on the special administrative region’s ability to elect its own chief executive. In June 2014, Beijing released a White Paper reconfirming its "complete jurisdiction" and ruling out the open elections for Hong Kong’s Chief Executive. On August 31, they confirmed that candidates for the position would be taken from a list of individuals vetted by Beijing and thus friendly to the communist government’s policies. Hong Kong’s Basic Law states that Hong Kong will co-exist with China as "one country, two systems" until 2047, with the right to “develop its own democracy.” As a result, the edict from China was taken as evidence that the authorities were trying to strengthen their grip on the previously autonomous territory and in doing so bring it closer into line with mainland ideology on human rights and civil liberties. This move to consolidate control elicited widespread outcry in Hong Kong, which of course spurred an overzealous reaction on the part of security forces to contain the demonstrations. On social media, the Umbrella Revolution attracted a massive audience, with close to 100,000 fans on Facebook and 25,000 followers on Twitter. During the early days of the protests (September 26 - September 30) the movement was one of the most talked-about events worldwide, with 12 tweets about Hong Kong posted every second as images of protesters covered in tear gas went viral. The high volume of photos shared on Instagram during the protests led to the Facebook-owned application being banned in mainland China on September 28 in an effort to stop others from following suit and joining the protests for social change. Before that, Instagram was one of the few popular websites not already restricted in China, where internet access is closely confined and press freedoms are virtually nonexistent. Social media was a game changer for demonstrators during the Umbrella Revolution, with the real-time applications allowing protesters to stay organized and connected. Instagram hashtags such as #OccupyHongKong, #OccupyCentral and #UmbrellaMovement were used frequently during the protests and a search using these terms produces more than 110,000 images. While the last of the protesters’ camps were dismantled by security forces in early December 2014, the message behind the Umbrella Revolution is still very much alive. Residents in mainland China lack the same access to microblogging applications used around the world, but they can still produce significant support for human rights causes in the country. In March 2015, five Chinese women’s rights activists were detained on the eve of International Women’s Day for planning a multi-city public awareness campaign against sexual harassment on public transportation. Li Tingting, 25; Wu Rongrong, 30; Wang Man, 33; Wei Tingting, 26; and Zheng Churan, 25, are among China’s most prominent feminist activists and following their arrest, social media played a significant role in galvanizing international pressure for their freedom.

The dissidents, known to some as the Feminist Five, received global support online with the hashtag #FreeTheFive used by those publicizing their detention on Twitter and pushing for their release. The Five spent over a month detained without any charges laid and were released on bail on April 13, shortly before the 37th day of their detention, which is the day, by law, that detainees must be formally arrested and prosecuted. Prior to their detention, the five women had participated in and led several women’s rights initiatives in the country including an LGBT rights group in Beijing, a performance of the “Vagina Monologues,” and numerous public campaigns against gender discrimination. Their arrest spurred international support over social media with tweets in the hundreds of thousands, including a tweet from Hilary Clinton. The well-mobilized Twitter campaign put pressure on Chinese authorities to release the Five, ending in triumph when they were freed on bail. Despite the Chinese regime’s best efforts to control the flow of information into, and within, the country, social media has made it much more difficult to insulate the mainland from dissident voices. It is not insignificant that, even though Twitter is banned in China, an international Twitter campaign helped secure the freedom of these five female activists. With China’s powerful media censorship, filtered social media platforms such as WeChat and Sina Weibo, as well as encrypted mobile applications such as Surespot, are used to raise awareness to those outside of China, and mobilize activists both in and out of the country. In the years following the Tiananmen Square massacre, the government has ruled with intimidation and censorship; however, in this new age equipped with social media, younger activists are finding strength from international communities online during their fight for press freedoms. The variety of platforms through which citizens can express themselves, interact with each other and mobilize action threaten the integrity of the Chinese censorship model and offer up promising opportunities to produce social change in the country. Violet Rusu is a volunteer for CJFE and a freelance political journalist based in Toronto. Follow her on Twitter @RusuViolet.
China Digital Issues Freedom of Assembly Threats and Attacks Free Expression: International Articles type-feature type-blog_entry
Do you like this page?
Tweet