Nabeel Rajab must be immediately and unconditionally released 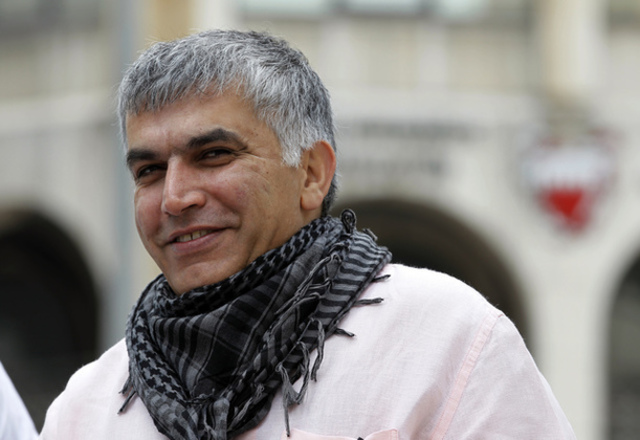 53 NGOs urge the UN High Commissioner for Human Rights, His Excellency Zeid Ra’ad Zeid al-Hussein, as well as the Special Rapporteurs on Freedom of Expression and on Human Rights Defenders, Mr. David Kaye and Mr. Michel Forst, to call for Nabeel Rajab's release.

We, the undersigned human rights organizations, write to urge your office to urgently and publicly call on the Government of Bahrain to immediately and unconditionally release human rights defender Nabeel Rajab and drop the charges against him. His next, and likely final, trial date is scheduled for December 28.

Nabeel Rajab's trial is ongoing following the fifth extension of his court proceedings on December 15. The further delay of Rajab's trial to late December is additionally concerning due to the precedent established by the Bahraini government to take advantage of the time period around the end of year holidays to further violate human rights. For example, on December 28, 2014, the Government of Bahrain arrested and charged Sheikh Ali Salman, the Secretary General of the now dissolved Al-Wefaq political society, in relation to his free expression. Salman continues to serve a nine-year arbitrary prison sentence following his own lengthy trial.

This December, Nabeel Rajab could face up to 15 years in prison on charges regarding tweets and re-tweets from his account addressing torture in Bahrain's Jau Prison, as well as criticizing Bahrain's participation in Saudi Arabia-led military operations in Yemen. These military actions in Yemen, according to the United Nations, have so far been responsible for the deaths of more than 8,100 civilians, and include numerous unlawful airstrikes on markets, homes, hospitals, and schools. Rajab's comments on Twitter about the Saudi-led coalition airstrikes in Yemen led to his arrest on April 2, 2015. Bahrain's penal code provides for up to 10 years in prison for anyone who “deliberately announces in wartime false or malicious news, statements or rumors.”

Bahraini authorities released Rajab on July 13, 2015 in accordance with a royal pardon for previous Twitter-related charges following extensive international pressure. However, the Public Prosecution maintained this second round of charges against Rajab following his release and ordered his re-arrest nearly a year later on June 13, 2016. Rajab is also facing charges of “offending a foreign country” – Saudi Arabia – and “offending national institutions” for his comments about the torture of inmates at Jau Prison in March 2015. In October 2016, after months of trial hearings, the court reopened his case for investigation rather than dismissing the charges against him due to the lack of evidence.

Moreover, the government brought an additional charge against Rajab in relation to an open letter published in the New York Times on September 4, 2016. The Bahraini authorities immediately responded by charging Rajab with “undermining the prestige of the state.”

Since June 2016, Rajab has been held in pre-trial detention, including two weeks of solitary confinement following his initial arrest. The United Nations Standard Minimum Rules for Non-Custodial Measures state that “pre-trial detention shall be used as a means of last resort in criminal proceedings, with due regard for the investigation of the alleged offence and for the protection of society and the victim.” The government's use of pretrial solitary confinement against Nabeel Rajab while prosecuting him for free expression is clearly an additional form of reprisal for his work as a human rights defender and is in breach of the UN's standards for detention.

Mr. High Commissioner, your office has pursued and published a number of communications in relation to human rights abuses perpetuated against Nabeel Rajab. Yet with his likely final court appearance approaching, it is imperative, now more than ever, to use the weight of your office to publicly defend him. We therefore call on you to issue a public statement in defense of Nabeel Rajab as a human rights defender arbitrarily detained for his free and peaceful expression. We further urge you to publicly call on the Government of Bahrain to immediately and unconditionally release Rajab, and to drop all charges against him.