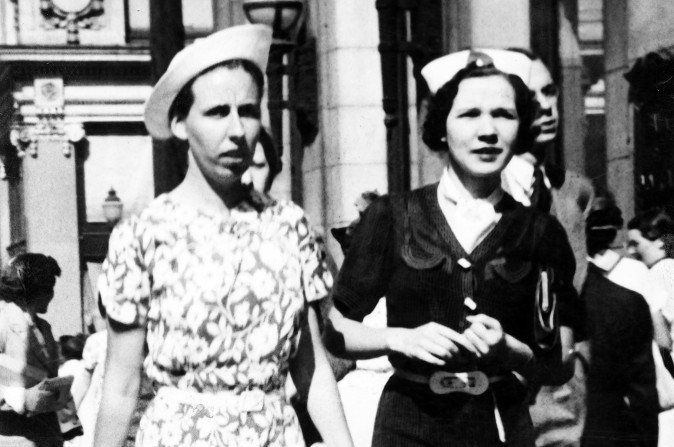 Sometimes my boss Evelyn would get angry with the men in our office at the News Herald, to the point that one night she took up the glue pot on her desk and tossed glue at Jack Scott. He happened to have a new sports jacket on and he didn’t appreciate it. And when she raced after him, he retreated into the men’s washroom. It was at the end of the city room, and the partition didn’t go up to the ceiling, she got a chair and tried to climb over in the middle of the hullabaloo, everyone laughing of course, back came our boss from his dinner and they both got called over the coals, reads an excerpt from the journal that Nikki Moir wrote at 80 years old.

Moir, born Myra Nicholson, died in December 2014, at 96 years old. One of the early female pioneers of journalism in Canada, she was born in Alloa, Scotland, in 1919, the youngest, and only girl, with five brothers. At ten years old, Moir moved to Canada with her family and found her passion in a Vancouver newsroom. She dropped out of her local high school in grade 11 and decided to try her chances as a journalist. She soon enrolled in a course at Pitman’s College and learned how to type after a little encouragement from her older brother Bill, who was a journalist back in Edinburgh. In 1935, at 16 years old, Moir got her first job as an office assistant at the News Herald where she would eventually meet her life-long partner, Reg.

Reg was a sports reporter, typical of males in the newsroom in Canada at the time. The two were young and in love, so Reg wasted no time before asking Moir’s parents for permission to marry their daughter. The two were wed by the time Moir was 18.

Moir’s big break came when the Second World War rolled around. Reg enlisted and was sent to Britain where he worked as a war correspondent from 1942 to ‘44. Without enough men to cover the military and court columns, Moir stepped in to take over.

I went into court one day, I hadn’t been there for very long when the defense lawyer told the prosecutor that I wasn’t old enough to be in court. The prosecutor agreed, but I stuck to my position. I was there on the job, reads Moir’s journal.

Shortly after the war, newsrooms began to shift back to their pre-war states. Moir took a temporary leave and gave birth to three children: Wendy, Terry, and John. By 1947, Moir was asked to write a homemaker’s column for The Province, a daily paper in B.C., where she worked for the next 20 years until her retirement. During her time at The Province, Moir frequently reported on Vancouver’s underprivileged population. “Poverty has a smell to it,” she wrote in 1964. “It is damp and woody and acrid. It hangs like a pall over Vancouver’s slums. Yes, there ARE slums in Vancouver.” After she interviewed a city welfare worker about the high number of women left without support during the holidays, donations to the Empty Stocking Fund hit a record high by 1965.

But even after she retired, her work didn’t stop. Reg had quit his career as a journalist, he thought it was a, “Young man’s business,” said their son, John Moir, in a recent interview. Instead, Reg took up law and became a partner at a firm in Kelowna, B.C. The pair packed up their belongings and moved from their Vancouver home. In Kelowna, Moir became a founding member of Elizabeth Fry, a centre dedicated to supporting women affected by violence. Moir was an advocate for the rights of women, particularly women who were vulnerable or in need of legal assistance. In 1971, she was invited to the Prison for Women in Kingston, Ont., to profile some inmates for her freelance career. Her work on the women prisoners turned into a three-part series that ran in The Province in November, ‘71.

Moir’s historical career as one of the first women in Canadian journalism is timeless. To honour her work, CJFE has established the Nikki Moir Women in Global Journalism Resilience Fund, thanks to a generous donation from Moir’s family. The fund is devoted to raising awareness to the risks that female journalists can face, and providing financial assistance to women who are escaping or resisting threats to their lives or livelihood including healthcare, travel, housing and legal support.

“Mom’s career was hard work, but not hardship. It gave her a rewarding life, apart from her life as a wife and mother,” said John. “Because her life was enriched by her work, I’m certain she would have wanted to support journalists in need, particularly women.”

Violet Rusu is a freelance journalist in Toronto and campaigner for freedom of expression, press freedoms, whistleblower protection, and minority rights.