Our Message to the Government: There Is No Security Without Rights 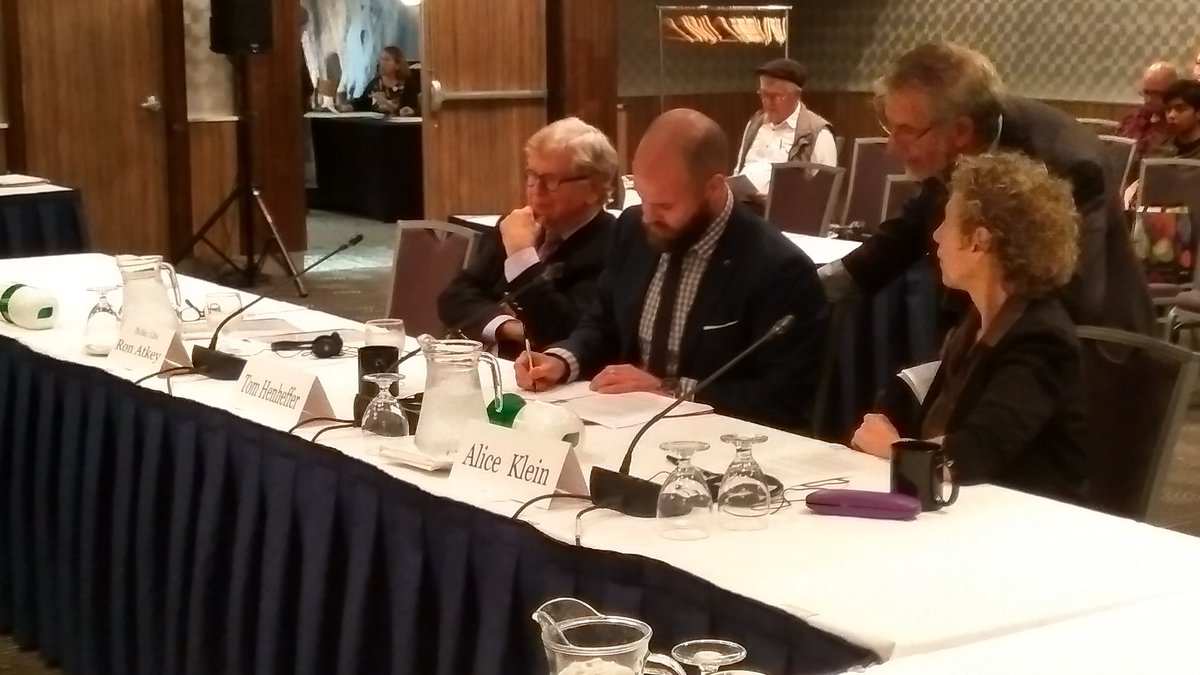 The government is consulting Canadians on Bill C-51 and national security, and CJFE is working hard to make sure your voice is heard.

This has been a busy week for the effort to bring respect for human rights to our counter-terrorism policy. On October 19, Campaigns  and Advocacy Coordinator Duncan Pike took part in a civil society round-table in Ottawa with Public Safety Minister Ralph Goodale and Justice Minister Jody Wilson-Raybould.

Speaking up for free expression and human rights in national security policy with Ministers Wilson-Raybould and Goodale in Ottawa. pic.twitter.com/wxAaeiK9iD

That same day, Executive Director Tom Henheffer testified before the Standing Committee on Public Safety's expert witness hearings in Toronto. Tom highlighted the dangers of our broken national security framework, and offered a concrete plan for reform by increasing accountability, protecting free expression rights, and rolling back the over-broad powers given to our spy agencies. And of course, he told them to #KillC51.

Tom Henheffer references chilling effect of #C51 on protest. "The 2010 G20 repression happened before #C51 was law. What would happen now?"

WE'RE SPEAKING OUT, BUT WE CAN'T DO THIS ALONE.

We need you to tell the government exactly what you think they need to change to protect your rights.

The government is asking for Canadians' input on Bill C-51 and national security. You have until December 1st to make an online submission to the consultation. Check out our campaign headquarters for all the information you need to participate.

Want to learn more? Here is a full version of what CJFE told the Committee

I’m here on behalf of Canadian Journalists for Free Expression, a non-profit, non-governmental organization that works to promote and protect press freedom and freedom of expression around the world. In July 2015 CJFE and the Canadian Civil Liberties Association brought a constitutional challenge to the Anti-terrorism Act 2015, on the grounds that specific provisions therein violate sections of the Canadian Charter of Rights and Freedoms, in a manner that cannot be saved under section 1 of the Charter.

There is a lot of work to be done with Canada’s national security apparatus, but given the short timeframe I will limit my remarks to the ATA and its impact on freedom of expression, as protected under Section 2(b) of the Canadian Charter of Rights and Freedoms and Article 19 of the Universal Declaration of Human Rights. I will also touch on issues of privacy, as the right to privacy is necessary for the full enjoyment of the right to free expression. I’ll leave it to my colleagues from other organizations to speak to other, equally pressing issues and concerns in the protection of rights and democratic values in the national security framework of Canada.

The oft-touted argument that we must strike a “balance” between security and rights, implying that the two are at odds, is deeply flawed. Protecting democracy requires a deep respect for human rights as enshrined in our charter and in international human rights documents, full stop. Ignoring Canada’s international obligations and disrespecting basic human rights will only create instability and insecurity.

We are thankful your government has embarked on this consultation, but share the concern with many other civil society organizations that the Green Paper on national security reform is deeply biased in favor of security and police agencies, putting their interests ahead of human rights. In one particularly egregious example, it contains no mention of the need to impose judicial control over Canada’s foreign intelligence agency (CSE) and regulate the agency’s expansive metadata surveillance activities, despite revelations that CSE operates under a ministerial directive that allows it to collect and analyze the metadata that is produced by Canadians using a mobile phones or accessing the internet.

CSE is permitted to read Canadians’ emails and text messages, and listen to Canadians’ phone calls, whenever they communicate with a person outside Canada. There is no court or committee that monitors the CSE’s interception of these private communications and metadata information, and there is no judicial oversight of its sweeping powers. CSE’s operations are shrouded in secrecy.

At the very least, we must bring judicial oversight to the work of Canadian intelligence agencies. This is a basic tenet of democracy our country now lacks.

In terms of specific legislation, the new Criminal Code offence of "promoting terrorism" is extremely troubling and must be addressed. It is vastly overbroad and captures speech made for innocent purposes, including private conversations. In prohibiting the perceived promotion of "terrorism offences in general," the law unduly and unnecessarily limits Canadians' freedom of expression and ability to engage in proper democratic debate. It is also unconstitutionally vague and imprecise, and a clear violation of section 7 of the Charter.

Leading constitutional scholars have written that this speech crime could easily be interpreted to prosecute anyone quoting a terrorist or sharing content produced by an extremist group online. This is particularly troubling for journalists in Canada, and indeed threatens the very institution of journalism, because the law does not weigh  a person’s intent when they share this content. In other words, a journalist could be charged with a terrorism offence just for doing his or her job, say by simply quoting a so-called terrorist as a source in a story. A private citizen could also be charged for sharing content from an extremist group, even if that sharing was solely for the purpose of condemning that same group.

The vaguely-worded speech crime will also undermine the government’s commitment to develop new community-level programs to counter violent extremism. In order to succeed, any such program will need to engage in robust and frank dialogue with radicalized and extremist individuals. By definition, many of these individuals will hold opinions that are sympathetic to proscribed terrorist groups. They have to trust that they won’t be placed under surveillance or arrested because they engaged in good faith with community programs.

Furthermore, criminalizing the expression of a political opinion, however repugnant, is anathema to a free society. There is an important distinction to be made between expressing an opinion, even in support of people carrying out violence, and directly inciting an act of violence. Content should only be considered a threat to national security if it can be demonstrated that it is intended to incite imminent violence, likely to incite such violence and there is a direct and immediate connection between the expression and the likelihood of occurrence of such violence.

The provision also has a chilling effect on freedom of expression, even if no prosecution is ever brought. Persons will prefer to remain silent rather than risk the perils of prosecution.

This law is unnecessary. Criminal laws in place before the adoption of the ATA 2015 were an effective means of dealing with these issues, and did so in a way that was far less threatening to human rights. As such, we urge the government to repeal this unnecessary, overbroad and dangerous law.

Without strong privacy safeguards, it becomes far more difficult, if not impossible, for people to exercise their human right to free expression. There are real, tangible harms that are demonstrated to occur when a society and its citizens are subjected to the kind of far-reaching, suspicionless surveillance that the government is currently directing at Canadians. This is not an abstract or theoretical concern. It is an established fact, backed by a large body of scientific research, that when people believe they’re being watched, their behavior changes in significant ways.

Surveillance in Canada has become increasingly pervasive, with little oversight or transparency of what powers are available to law enforcement and how they are used. The alternative to mass surveillance is not the elimination of surveillance. It is, instead, targeted surveillance, which is far more likely to stop terrorist plots. It also allows for judicial oversight, which, again, is crucial in any democracy.

We urge your government to concentrate on targeted, constitutional surveillance, and to end the ineffective mass surveillance practices that are encroaching on the rights of all Canadians.

Overbroad information sharing is a further threat to privacy. As has been pointed out by privacy commissioners and advocates across the country, the Anti-Terrorism Act 2015 allows a large number of government departments and agencies to share individual's' private information, and does so without necessary oversight to ensure that this power is not abused.

Our time is very limited today, but I wanted to briefly touch on some other aspects of the ATA 2015.

Firstly, the bill’s new warrant process destroys the entire purpose of the courts in Canada. In a normal democracy, a judge has oversight over the warrant process in order to ensure an investigation can be conducted without unjustifiably violating charter rights. The ATA allows judges to pre-authorize charter violations, in secret, without notifying the subject of those violations. This is a bizarre reversal of the purpose of the courts, and is unconstitutional. Furthermore, it puts legitimate investigations in jeopardy as it could easily lead to judges throwing out illegally-obtained evidence. For the sake of rights and our national security, it must be repealed.

Secondly, the bill allows the government to hold secret deportation hearings and drastically limit information shared with advocates for the subject of those hearings. This is an unconstitutional violation of jurisprudence and must be repealed.

Thirdly, the Secure Air Travel Act further extends Canada’s opaque no-fly list process, without providing a meaningful means to appeal for anyone who has been added to the no-fly list. There is no evidence a no-fly list has ever prevented a terrorist attack, but it has a huge societal cost. Many innocent people have been robbed of their ability to travel because they’ve been added to the list through a secret process with no effective means to appeal. Maher Arar, to illustrate one of many examples, is still on a no fly list and unable to travel because of this faulty process. This legislation should be repealed.

Although these issues may not appear to impact free expression directly, the broadness of the legislation, the lack of oversight and the potential for abuse means these new laws could easily be used to target political enemies of the government, journalists uncovering difficult  truths, or citizens exercising their constitutional right to speak freely and protest.

Genuine security is embedded in the concept of human rights, and only be maintained through their promotion and protection. Human rights should, therefore, be a core consideration in any national security strategy. To ensure the effectiveness of this approach, national security proposals should be carefully examined, tested for constitutionality and regularly reviewed to assess their impact on human rights standards and obligations. Our current national security regime, which rests largely on the ATA 2015, was not built on these principles. As such, the Anti-Terrorism Act must be repealed.