CJFE was a founding member of the International Freedom of Expression Exchange Tunisia Monitoring Group (IFEX-TMG, 2004-2012), a coalition of 21 IFEX members that campaigned to raise awareness of free expression violations in Tunisia and to support independent journalists, writers, and civil society activists in their struggle to end censorship in the country. The campaign began at the IFEX General Meeting in Baku, Azerbaijan in June 2004, when 31 members of IFEX signed an open letter to UN Secretary General Kofi Annan expressing serious concerns about the decision to host the U.N.-sponsored World Summit on the Information Society in Tunisia. IFEX-TMG concluded in January 2012 after eight years of campaigns. IFEX members will continue to work with local advocacy groups towards the advancement of media freedom in Tunisia.

Journalists in Exile was a group of over 60 journalists and editors from around the world who fled their homelands because of persecution due to their work. This program gave a voice to exiled journalists and connected them with the world of Canadian media. CJFE provided ESL workshops, internships, and other initiatives for these journalists. We also worked with Sheridan College to create a one-year program for international, professionally-trained journalists. To read more about Sheridan College's program, please click here. 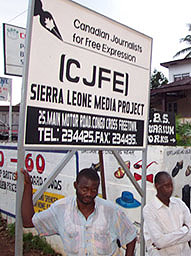 In 2001, CJFE organized a major project to help rebuild key parts of the media in Sierra Leone. The main focus of the initiative was the West African country's print media. Sierra Leone's newspapers were devastated following years of brutal civil war and severe economic decline. Many newspapers remain in a state of crisis, unable to provide adequate daily news coverage. CJFE played a lead role in revamping the print media in Sierra Leone. With the purchase of a printing press and a local co-operative to run it, the country's major newspapers are now able to put out quality publications on a regular basis. Moreover, CJFE has ensured that all papers that use the press abide by a code of ethics in order to improve the quality of news coverage. The project, whose co-ordinators are in Canada and the Sierra Leonean capital of Freetown, benefited from the expertise of Canadian and foreign consultants who conducted in-house training at the newspapers on subjects such as editorial quality, advertising sales and circulation development. CJFE also provided digital cameras for an innovative training program which taught reporters how to use them.
"CJFE and all the brains behind [the project] need to hold their heads up high because of the major transformations our papers have gone through within a short time." Sierra Leonean media consultant and media trainer Mike Butscher
The project was supported by the Canadian International Development Agency (CIDA), the Swedish International Development Agency (Sida), the World Press Freedom Committee and UNESCO.

CJFE conducted journalism training programs in developing countries in co-operation with local partners and the financial support of the Canadian International Development Agency (CIDA). Canadian journalists with experience in media training and cross-cultural communication are contracted to teach the courses. A goal of every project was to teach local journalists to be trainers themselves. 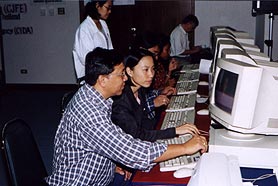 Throughout the 1990s, broadcast journalism in Thailand experienced a period of increased independence and structural change. Prior to the new Constitution of 1997, all electronic media outlets and airwave frequencies belonged either to government agencies or to the armed forces. The new charter, which explicitly promotes freedom of expression, mandated that a National Broadcasting Commission be established to re-allocate frequencies in the public interest. As a result, the Thai media experienced a burgeoning of new community and private radio stations trying to deliver information programs for the first time. In order to assist the process, CJFE collaborated with the Thai Journalists Association on a radio-skills training project to help prepare dozens of radio journalists to realize the potential of their craft under a new, freer broadcasting regime. The project strengthened the capacity of broadcast journalism in Thailand to promote democracy and communicate important issues to the public. 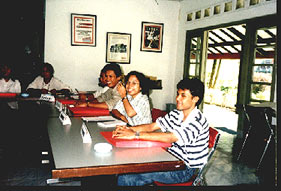 In 1999, CJFE began work in Indonesia on what proved to be a fruitful and successful training experience. Prior to the establishment of the media training program, Indonesia experienced a dramatic growth in broadcast journalism. This is important for the country, made up of more than 17,000 islands spread out over a geographical distance the size of continental Europe. Helamyanti, a female journalist with Radio 68H in Jakarta who took part in a Radio Skills course in Jayapura A key partner in CJFE's work in the South Asian country was the Institute for the Studies on Free Flow of Information (ISAI), a leading free expression group. Through the training efforts of CJFE and consultants, over 70 radio journalists from a variety of radio stations throughout Indonesia learned new skills on radio reporting and program development. Some have gone on to participate in the "Train-the-Trainer" program. The impact of CJFE's work in the country has been in the passing of knowledge by students to hundreds of their colleagues.
"I knew only a little about radio journalism after I graduated from the department of communications at university, and even after working for Radio 68H. Now, I know a lot about radio production, interviewing techniques, how to write radio news stories and also how to present a radio news story before the microphone."
type-page
Do you like this page?
Tweet