Play this game. Don't play games with our rights.

The sizzle reel for Orwell: Ignorance is Strength from Surprise Attack Games.

It sounds like science fiction: a shadowy government entity builds a multi-billion dollar high-tech campus in the nation’s capital. It begins a massive recruitment drive gathering thousands of employees with a wide array of skills and technical aptitudes. Then, the government tables a law that would award this entity new and unwarranted powers to eavesdrop on and hack targets connected to foreign countries as well as gathering and storing open-sourced data on citizens. The proposed new law would also give the nation’s spies the power to produce or disseminate false information (including news reports) in order to achieve investigative goals or mislead foreign targets.

If you thought we were describing reality, you’d be right. All of these powers are contained within the federal government’s Bill C-59, a deeply troubling update to the widely opposed Anti-Terrorism Act, 2015 (Formerly, Bill C-51). The most troubling portions of the bill pertain to the CSE Act, which defines powers for the Communications Security Establishment (CSE). The powers defined in the act allow the organization to collect “publicly available information” on Canadians. This includes anything anyone posts on the open web or on social media. It may include data collected by third-party data aggregators, such as Equifax Canada, or even information that has been hacked and made available for sale on the ‘dark web.’

Considering the breadth of information available online, in combination with the CSE’s powers to collect information from foreign allies by entering into arrangements, and from other branches of government, the CSE could potentially build comprehensive digital dossiers on Canadians without ever running afoul of Bill C-59’s prohibition on directly targeting Canadians.

All of this is why CJFE was surprised and amused to find that the very same terrifying state powers are central to the plot of the new video game Orwell: Ignorance is Strength from Surprise Attack Games. Structurally the game is an interactive, text and image driven story that simulates the operating interface of a digital spy for a country known only as ‘The Nation’. In design and execution the game tips its hat to renowned puzzle titles such as “Papers Please” (in which the player acts as an immigration officer presiding over passport control at a fictional Eastern European border). There’s a new genre of interactive entertainment which is both educational and informative, putting players behind the scenes on bureaucratic processes and uses gallows humor to reveal the banality of evil that facilitates repression or abuse of power. 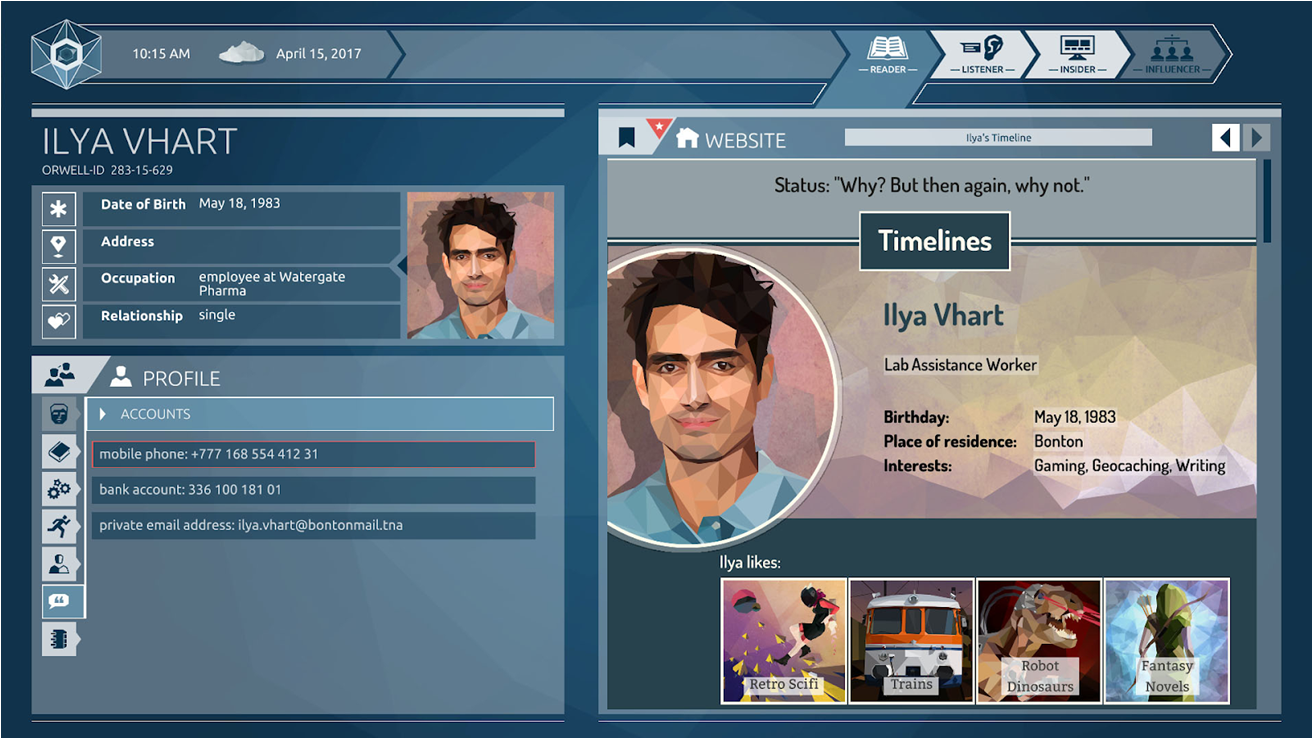 If there’s one thing Orwell: Ignorance is Strength teaches us it’s that there are no sacred cows in a world of total information awareness. Image: Surpise Attack Games!

The plot of Orwell: Ignorance is Strength puts the player in the wheeled, ergonomic office chair of the digital spy charged with collecting open source information on residents of a country known only as ‘The Nation’. Information is collected in order to tick off goals in a sweeping national security investigation into recent unrest and at least one terrorist attack. The investigation and the plot revolve around a populist anti-establishment blog “The People’s Voice”. (The Nation’s equivalent of “Rebel.media” or “Infowars”.) The People’s Voice presents a major challenge to state authority until its frontman Raban Vhart is implicated in a disappearance and becomes party to an escalating international intrigue. It’s a plot that would be right at home on Showtime’s Homeland.

Gameplay sees the player sifting through a combination of public and private documents, collecting, highlighting and committing information, or ‘data chunks’ which are aggregated into detailed profiles of people in Vhart’s life. Mining these profiles for interconnected information and other leads can grant increased access to a subject. Access may mean being able to read their personal or business e-mails or to remotely activate GPS or audio features on their mobile devices by using correctly-guessed smartphone passcodes. Ultimately the player becomes the arbiter of truth, taking actions such as allowing lies to spread unchecked and monitoring their uptake and spread on social media. The impression Orwell gives is the overwhelming omniscience of the digital spy and the murky moral territory in which the keyboard-jockey-James-Bonds of the 21st century operate.

As a political statement and an educational product, Orwell, like the eponymous author, gives us a glance into the grim dystopia of total information awareness. That’s why we’ve partnered with Surprise Attack Games to send 443 license keys for the first episode of Orwell: Ignorance is Strength to Canadian Members of Parliament and Senators.

If Bill C-59 is passed without amendment in Canada the potential for abuse poses an unacceptable risk to democracy, journalism and free expression. We could just send another public mass mailing or protest letter expressing our concerns, and we HAVE done this, but we want to explore new ways and new mediums to engage with this issue. While the narrative of Orwell: Ignorance is Strength is fictional, the investigative techniques and methodologies used by the Nation’s digital spies are not. Since Bill C-59 is under consideration in Parliament, we want to give Canadian legislators the opportunity to experience the powers of the digital spy firsthand. It’s our belief that any responsible politician who understands in detail the implications the CSE Act will have on our civil liberties will not vote for the content of this bill as-is. Our message to them is clear: Play this game, but don’t play games with our rights.