By: Evan Balgord and Kevin Metcalf 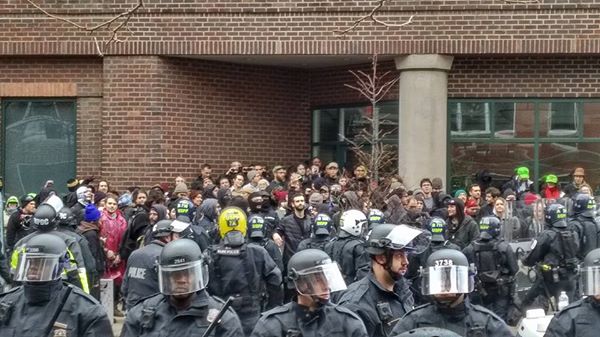 Activists, members of the press and legal observers surrounded by police in Washington DC during the January 20th inauguration of President Donald J. Trump

A snap decision by frontline police officers in Washington DC on Inauguration Day led to an altercation between supporters of US President Donald Trump and masked protesters. The riots culminated in the breaking of windows and burning of a limousine which became a symbol for resistance to the reactionary agenda of the incoming administration

In response to demonstrations, militarized police used pepper spray and less-than-lethal grenades to advance on masked protesters, journalists and a diverse group of demonstrators. Resulting street battles spilled from the initial flashpoint into surrounding streets and parks including McPherson Square, the official convergence space for anti-inaugural protests dubbed Disrupt J20.

Minutes after Trump took the inaugural oath, a crowd assembled at the intersection of 12th and L streets in downtown Washington. The crowd was calling for the release of about 100 demonstrators, members of the media and legal observers who were surrounded by police and facing arrest. Some individuals are reported to have participated in earlier acts of vandalism which led police to detain them on suspicion.

A team observing on behalf of CJFE was present at the intersection after hearing reports of journalists facing arrest, and observed a peaceful rally at the site of an ongoing police blockade. Within the police cordon, approximately 100 individuals were contained and being arrested by police. Reports on the ground confirmed that members of the press, freelance journalists and legal observers were being arrested along with the activists. Beyond loud chants of “let them go,” the mood was peaceful and non-confrontational.

A trio of men identified as Trump supporters by their signature red caps walked into a small crowd and tried to pass through a section of the police line in the direction of their hotel. The police officers turned them back, forcing them to pass back through the crowd which immediately caused confrontation as activists verbally harassed the Trump supporters. The three were quickly surrounded and a small scuffle broke out. At this moment, the police line advanced.

Following a disturbance in the crowd, activists, journalists and legal observers are pinned against the wall by an advancing police line and pepper-sprayed point blank. Video credit: Evan Balgord

The CJFE team was pinned against a wall while police indiscriminately pepper sprayed members of the press and demonstrators alike, then complied with police orders to exit the situation. Officers then advanced from behind a barrage of ‘stinger’ fragmentary grenades, teargas and pepper spray directed at anyone unfortunate enough to be caught in their path. Affected casual onlookers staggered away and Indigenous elders lay on the ground receiving urgent care from medics. 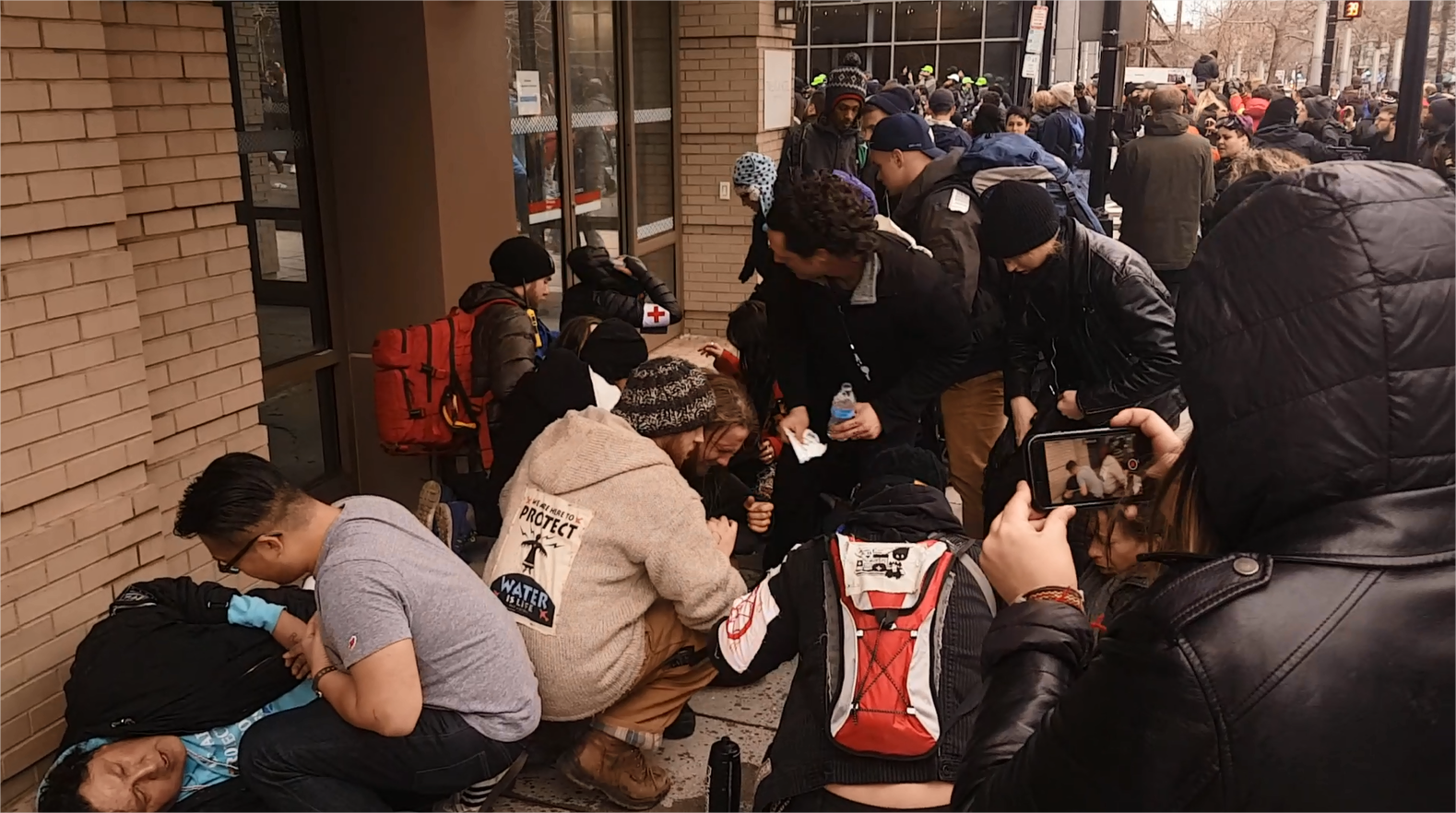 Indigenous elders and allies are treated for exposure to pepper spray in downtown Washington, DC during protests at the inauguration of President Donald Trump. Image credit: Evan Balgord

In response to police handling of the DC riots, the National Lawyer’s Guild (NLG) filed a formal lawsuit alleging police abuses and violations of civil liberties for the deployment of pepper spray against demonstrators who were physically prevented from leaving. Protests leading up to the January 21st Women’s March on Washington were also marked by clashes between protesters and police, culminating in the arrest of around 200 demonstrators.

The NLG reports that all those arrested are facing very serious felony riot charges; activists and members of the media who were detained on suspicion face a maximum sentence of up to 10 years in prison. Phones, cameras and other recording devices belonging to those arrested have been seized as evidence. The NLG has confirmed that felony riot charges are an anomaly for policing of protests in the American capital.

Following Trump’s inauguration, an update to the White House website proclaims that the Trump administration will end the “dangerous anti-police atmosphere” in the country, stating, “Our job is not to make life more comfortable for the rioter, the looter, or the violent disrupters.” This rhetoric suggests a further crackdown on demonstrations such as those that marked his inauguration. This statement could also be taken as a direct and ominous warning to groups like Black Lives Matter (BLM), who advocate on community justice and policing issues. BLM participated in peaceful blockades at the inauguration grounds on Saturday, January 21.

Also on Saturday, the Trump administration’s press secretary Sean Spicer openly criticized the media for publishing photographs of inaugural spectators and for their objectively factual reporting of public attendance of the inauguration. This marks part of an ongoing feud between the days-old Trump administration and media outlets that exacerbates concerns about the deteriorating state of press freedom in the United States. Commenters from the “alt-right,” a white nationalist movement, also took to Twitter to condemn a series of blockade actions by what they claimed to be “paid, professional protesters” who prevented Trump’s supporters from accessing the inaugural grounds.

Supporters of president Donald J. Trump were peacefully prevented from physically accessing many of the gates which led into the inauguration grounds.

Disruptions are already reportedly being planned for a potential upcoming visit by Trump to Canada. Traditionally, this visit is the first official trip by US presidents to a foreign country, but it remains to be seen whether the tradition will be upheld. When interviewed, radical organizers called the Trump administration an illegitimate and fascist regime, and have stated they are committed to continuing the tradition of resistance upon Trump’s arrival in Canada.