Quebec protests put the spotlight on the heavy-handed treatment of journalists by police. 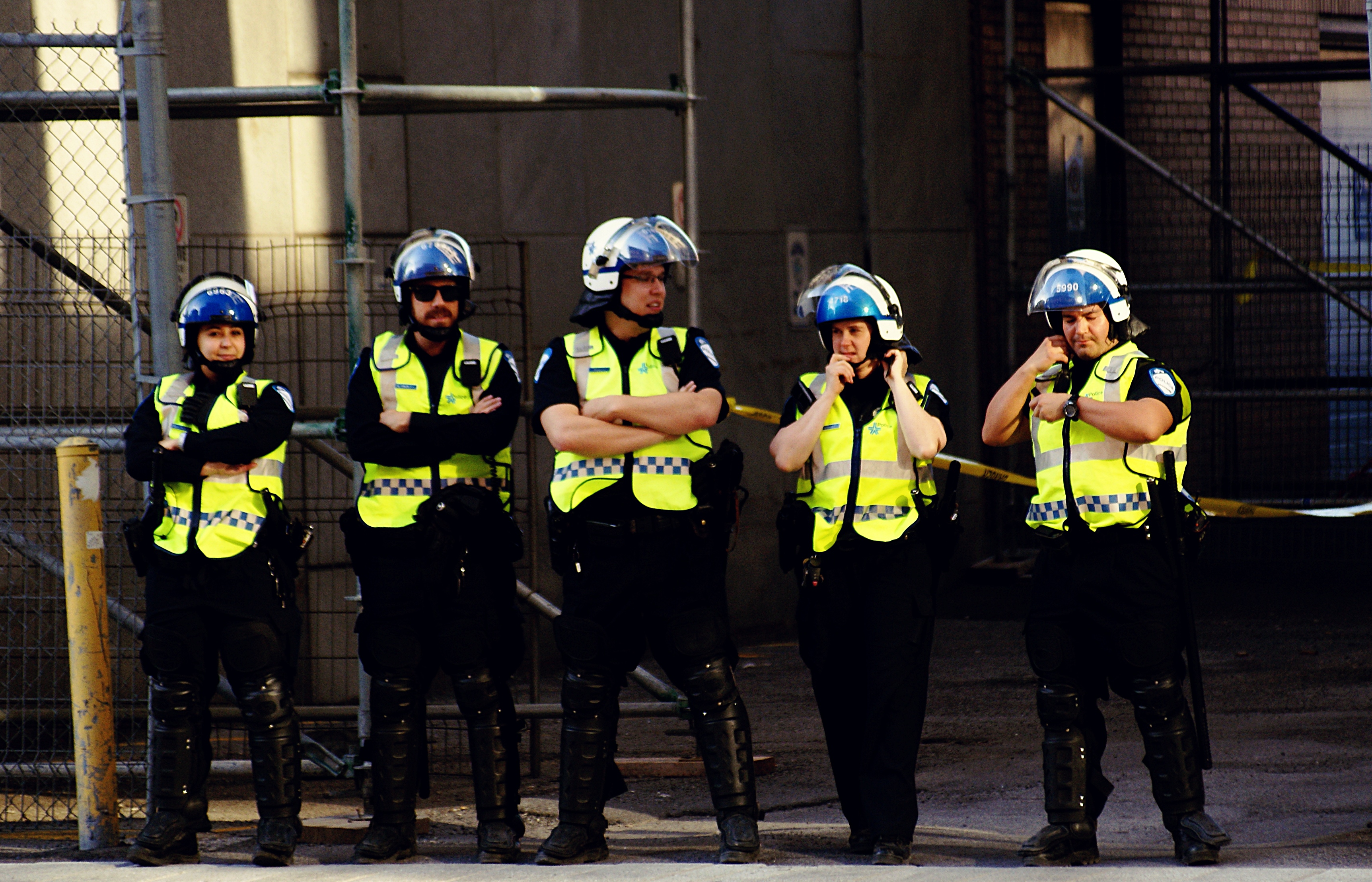 Montreal cops in riot gear stand by at the May 7, 2014, rally against police brutality in Montreal. The small gathering was surrounded by police and 2 arrests were made during the event. Photo by CC/Gerry Lauzon

This story first appeared in the 2015-16 CJFE Review for Free Expression in Canada.

“They jumped on me and tackled me, and then put me in handcuffs,” recalls Aaron Lakoff. “I very clearly had a media pass,” adds the community organizer and seasoned journalist, who was covering a June 2012 protest for Concordia University Television (CUTV), a volunteer-based community TV station that had an overt pro-activist bias.

A report released in June 2015 by Montreal-based civil liberties advocacy group Ligue des droits et libertés documented 46 mass arrests in Quebec over the last five years where nearly 6,000 people were charged with protest-related offences. During the same period, journalists covering demonstrations reported being verbally intimidated, assaulted and arbitrarily detained or arrested by police. While tensions between police and journalists have been mounting across Canada for over a decade, the problem has become endemic in Montreal.

This escalation of repression against journalists started with the shift in crowd control techniques following the emergence of the anti-globalization movement in the late 1990s. In April 2001, photojournalist Louise Bilodeau was arrested during protests against the Summit of the Americas in Quebec City. “I showed them my camera, my press card, there was nothing to do,” Bilodeau explained in an interview for the Fédération professionnelle des journalistes du Québec (FPJQ) magazine Le Trente.

Nearly a decade later, freelance journalist Jesse Rosenfeld was arrested under similar circumstances while covering the 2010 G20 Summit in Toronto for The Guardian. With more than 1,000 arrests made during one weekend, the 2010 G20 marked a peak of political repression in Canada that remained unmatched until the 2012 Quebec student strike. During the “Maple Spring,” a six-month-long social movement that spread throughout Quebec in 2012, several incidents of police violence against journalists were reported, particularly in Montreal, where daily demonstrations were met with a strong-handed police response.

While a special law passed by the Quebec government all but banned unauthorized protest in the province, Montreal officials amended municipal bylaw P-6 to render any demonstration illegal if the police have not approved the route. The controversial P-6 bylaw and a section of the Quebec Highway Safety Code were routinely used to detain hundreds of peaceful protesters during and after the Maple Spring. Last year, the UN Human Rights Committee condemned the “increased repression of mass protests” and stated concern with “the excessive use of force by law enforcement officers during mass arrests” in Canada.

Journalists covering protests in Quebec “generally complied with reasonable police orders,” insists William Ray, former member of CUTV. “We never interfered with the work of a policeman,” Ray says, noting that both citizens and journalists are becoming more assertive about their right to document demonstrations and police operations.

“I’m very conscious of the police’s work,” adds Le Devoir photographer Annik MH de Carufel, who has covered countless protests over the past few years and observed how “police have gotten stricter” with both demonstrators and journalists.

Several well-documented reports show that police frequently used pepper spray, shields and batons, as well as various sub-lethal weapons, like rubber bullets, tear gas and stun grenades, sometimes clearly targeting journalists and their equipment. “I’ve been pepper sprayed, I’ve had tear gas; sometimes, even if you have a camera they don’t give a damn,” says Global News cameraman Marc Latendresse. Although this repression affects mainstream and alternative media journalists alike, members of CUTV and other independent journalists have occasionally been detained or singled out and attacked by police while covering protests.

“We never went along with their narrative,” Ray says, as an explanation for this particular mistreatment, noting that the station’s footage often contradicted the “narrative being formed by the police.” Indeed, the investigative team at Radio-Canada’s Enquête eventually used CUTV’s and other independent footage to prove that officials from Surêté du Québec (SQ, the Quebec provincial police) had misled the public about its reckless use of rubber bullets during the Victoriaville riot of May 2012, during which three protesters were seriously injured.

Since 2012, police have routinely and aggressively prevented journalists from documenting their operations. In February 2013, Montreal police (SPVM) public relations officer Daniel Lacoursière was filmed charging up to a La Presse video-journalist and threatening him with the charge of obstructing a police officer—all for closely filming an arrest.

“Journalists need to be able to do their job,” stresses FPJQ president Lise Millette. She says that physical interference is only one aspect of the problem, pointing out that the Montreal police recently started encrypting their radio communications, which makes reporters much more dependent on the SPVM’s public relations officers for sourcing their stories and for following events as they unfold. Millette says the FPJQ still maintained “an open channel” with SPVM media relations officials to ensure professional journalists are not mistreated by police and are promptly released if they get caught in a mass arrest.

These protections do not extend to journalists who aren’t FPJQ members. McGill Daily photojournalist Shane Murphy was violently apprehended and fined while covering an anti-austerity protest in May 2015. A year earlier, Murphy had been shot with a rubber bullet at close range while covering a student protest. He subsequently filed a lawsuit against the Montreal police, which was recently settled out of court.

In July 2015, Matt D’Amours—a journalist with 99% Media and The Link, Concordia’s student newspaper—was issued a ticket under section 500.1 of the Quebec Highway Safety Code while live-streaming a protest. “I was detained and physically restrained,” D’Amours says. “More distressingly, the officer who issued this ticket physically removed my recording equipment from my hand and ended my broadcast, against my explicit objection.” Filed under a provision now deemed unconstitutional, the charge was dropped earlier this year.

Things were looking up in September 2015, when Commander Ian Lafrenière, head of communications for Montreal police, met with representatives of independent media (including me) and CJFE to discuss the conflict between police and journalists. “There have been mistakes on both sides,” Lafrenière said at the meeting. But while SPVM communications—which did not return our request for comment—drafted a set of “ground rules for media coverage during mass events,” it doesn’t seem that these guidelines have reduced police interference as journalists attempt to report on protests.

Journalists covering a small student protest on Dec. 18, 2015, reported direct interference by both uniformed and undercover police. Jon Cook, news editor at The Link, says an undercover officer attempted to “block the view” of photographer Brandon Johnson, who was capturing the arbitrary arrest of a peaceful demonstrator by two other undercover SPVM officers. D’Amours notes reporters weren’t interfering with police: “We were all clearly identified as press, we kept a reasonable distance from the officers, and none of us engaged in any provocative or aggressive acts toward police,” he says, adding that he and other reporters were still ordered to disperse.

While the problem of journalist repression is pervasive in Quebec, similar stories have been reported in other parts of the country. In 2013, Halifax Media Co-op journalist Miles Howe was arrested three times while covering protests against fracking near the Mi’kmaq community of Elsipogtog in New Brunswick. Such shutting out of media—and particularly of independent reporters—appears to be a deliberate strategy of police to prevent legitimate public scrutiny of constitutionally dubious militarized tactics designed to suppress dissent rather than maintain the peace.

These actions aren’t going without notice. In its latest report on Canada, the UN Human Rights Committee noted the excessive use of force during police protests, and it urged the federal government to “ensure that all allegations of ill-treatment and excessive use of force by the police are promptly and impartially investigated by strong independent oversight bodies with adequate resources at all levels, and that those responsible for such violations are prosecuted and punished with appropriate penalties.” Yet, even as people across the country have voiced their concerns about law enforcement agencies’ extended and persistent violations of fundamental freedoms, there has been no response from governments.