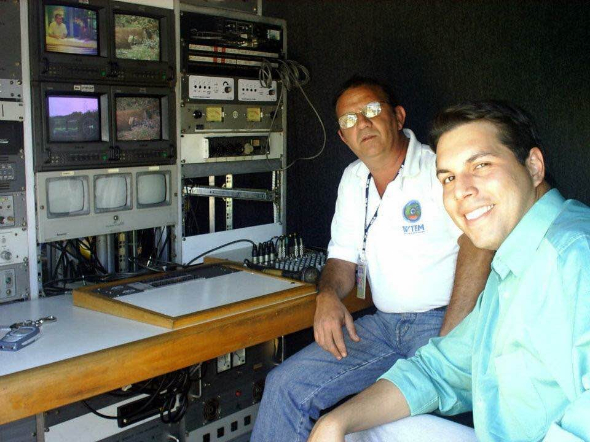 Luiz Hidalgo Nunes Jr. of Brazil has been awarded the 2015-16 Scotiabank/CJFE Journalism Fellowship at Massey College. It gives seasoned journalists from Latin America the opportunity to complete two semesters of study at Massey College, at the University of Toronto. Luiz is the fifth journalist to take on the Fellowship and CJFE is very excited to welcome him to Toronto this September! Before his arrival, we had a chance to ask Luiz some questions about Brazil, his background as a journalist, and his hopes for the Fellowship.

What made you want to become a journalist?
I've always been fascinated with the possibility of being a witness to facts that ‘regular’ citizens wouldn't be able to see. The possibility that my work can help people understand our society and maybe change it also had a huge impact. That motivation still exists today. However, the way journalists are perceived has changed. In Brazil, media vehicles are dividing themselves into ‘pro-government’ and ‘opposition,’ and journalistic work is always under attack one way or another. If your stories talk about corruption and bad economic policies, then you're conspiring against the country. If your stories praise initiatives that make people's lives better, then you're a sold journalist who endorses corruption in the government. It has been tough.

You were briefly a press agent before returning to freelance reporting and editing. What prompted your break from and return to journalism?
After almost 10 years as a reporter, I’d become somewhat disillusioned—not with journalism itself but with the way things were. I had done some great reports, huge stories, and had even received an award, yet there was no professional recognition, nor progressing to higher positions or better salaries. Add to that the fact that I’d never worked as a press agent and there it was: I needed to try something different. It was great for a while; I learned a lot. But after a while I became disappointed in it, and the intrinsic bureaucracy is very tough. But, most importantly, I was asked to do some freelance reporting and suddenly everything was fun again. That's when I stopped trying to pretend: part of my joy of being a journalist is being a storyteller. As a press agent, it’s often impossible to do that.

You’ve reported on a wide range of topics, from men's health to politics to the environment. What have been your most rewarding and challenging experiences as a journalist?
For rewarding experiences, it’s the Sugar Cane story, part of a series we did at TV Tem. In the report I had to show how sugar cane culture, when mishandled, can seriously damage the environment. But since it’s a great pillar of the Brazilian economy, I couldn't simply criticize it. The report had to present alternatives and manners in which the culture could be improved without being too judgmental. A few months later, the CPFL Energia Press Award for stories on environmental conservation gifted me with the Best TV Report Award.

There have also been numerous challenging experiences, but a huge one happened in 2008 when a friend invited me to take part in the press management of the International Theatre Festival of Sao Jose do Rio Preto. I had to produce four TV show segments about the festival, 30 minutes each, from scratch. I did it all mostly by myself, from defining the content to anchoring it. It was a hard job but today is still one of the things I'm most proud of having accomplished. A challenging but also rewarding experience.

JOURNALISM AND PRESS FREEDOM IN BRAZIL

What’s the state of press freedom in Brazil?
We do have press freedom and free expression guaranteed in the Brazilian Constitution, but there are also political parties and groups that defend media regulation. It already happens in other countries, but, due to Brazil’s history and political issues, most media tend to experience it as censorship. The last few years (and quite a bit longer in some regions) have shown that governors and authorities tend to put all their efforts into preventing certain facts from being disclosed to people, especially if it proves corruption or illegal actions.

What are the risks involved with being a journalist in Brazil today?
Besides mass firings, Brazilian journalists face death threats depending on the subject of their work. In big cities, stories involving the police can bring you guaranteed threats, sometimes by the police itself! For example, André Caramante—a respected public safety journalist at one of the most influential Brazilian newspapers—had to move abroad for his own safety because he faced so many threats. Later he moved back to Brazil but was transferred to the sports section by the newspaper, having been fired after his ‘vacations’. In small cities, politicians are usually responsible for threats and lawsuits against journalists, even if the reports are completely true. They will phone media companies to demand a journalist to be fired—sometimes they succeed. In the last few years journalists have also been targeted by both police and citizens during public demonstrations.

According to CJFE research, four Brazilian journalists have been killed in retaliation for their work so far in 2015. Do you think there’s adequate protection for journalists working on sensitive topics in Brazil? Is there political will to prosecute individuals who threaten and murder them?
Not really. Depending on the topic, there's no protection for journalists whatsoever. We sometimes hear of actions that deserve journalistic investigation and disclosure to the public but are discouraged due to the lack of protection. Companies may be interested in those stories but they cannot guarantee the safety of journalists, either during the investigation or after the story is published. As for politicians, many have been our greatest enemies for years. Every once in a while a politician proposes media regulation and pre-evaluation of stories—actions that can be classified as censorship. The problem is that Brazil is known for its political corruption—most politicians don't encourage journalistic work if they may end up being exposed. If some politicians, authorities, and police forces had their way, free journalism in Brazil would already have been forbidden.

Have you ever faced threats or insecurity in the course of your own work as a journalist in Brazil?

A few times, especially when covering stories involving thefts and assaults. Thankfully, nothing bad has happened to me. I’ve also faced unwillingness when confronting authorities, and more than once I did a story only to hear that “higher bosses” demanded it not be broadcasted. Two women once sued me, my whole reporting team, and the TV company itself. They alleged it was a two-year-old report that had caused their nursing home to be closed, damaging their business and income. The legal action eventually came before the judge who had himself signed the legal order to close the home, and his reasons had nothing to do with our story at all. He hadn’t even seen our report!

You’ve worked in a number of news media: television, magazine, newspaper, web journalism. Where do most Brazilians get their news from?
Until a few years ago most Brazilians got their news from TV and radio—the primary sources of information—followed by newspapers and magazines. Radio is still strong today, but more and more Brazilians also get their news from the Internet—many, unfortunately, from social networks. This is very problematic because, on these sites, news usually come loaded with personal points of views and the website’s algorithm often won't show that there are two sides of the story—not to mention when news reports are fake (which happens a lot). Since the number of people watching TV and buying newspapers and magazines has decreased, profits have done the same. Companies began mass firing journalists. In a single day, one of Brazil's biggest and oldest publishing houses, Editora Abril, closed some of its magazines, sold others, and fired hundreds of professionals.

What was your reaction to being selected for this Fellowship?
It was awesome but at the same time I couldn't believe it! I received the email telling me I’d been chosen on March 31, which prompted me to check the calendar a thousand times to confirm it wasn’t an April Fools’ prank. Then it gave me a great sense of accomplishment—the fact that my work and skills have been acknowledged by a committee of specialists proved that my experience up until now hasn’t been a waste of time. I'm beginning to feel a little bit anxious now, since the Fellowship begins in a few days. That's part of human nature whenever facing a great challenge. I’m confident that this will be a unique opportunity for my professional growth, and I'm looking forward to it.

What do your eight months as a Journalism Fellow look like? What are your plans for the future?
Although it looks like a long period, it seems too short for the amount I’ll be learning. I expect these eight months to be a period of improving my journalistic skills and also allowing me to expand my interest areas and ways of doing my job. As for the future, I intend to keep on being a journalist, maybe going back to TV reporting or maybe trying new challenges. I'll wait for the best when it comes, but I hope it will be a position where I can apply all my journalistic experience, as well as everything that shall be added during my time as a Fellow.

How do you think this Fellowship will impact you?
Besides being able to observe a different way of doing journalism, this Fellowship will provide me the opportunity to look at my own country in different ways. Being out of my 'natural habitat,' this foreign culture shall help me develop a critical sense of the problems and difficulties Brazil faces, as well as the whole world. Also, as the first Brazilian Fellow, I hope my performance shall have a positive impact on the committee that believed in my potential as well as my future Latin American colleagues. I hope in the future many other Latin American journalists may have the same opportunity I’m having now, allowing them to broaden their professional horizons.

The Scotiabank/CJFE Journalism Fellowship is made possible through the generous support of Scotiabank. It gives seasoned journalists from Latin America the opportunity to complete two semesters of study at Massey College, at the University of Toronto.