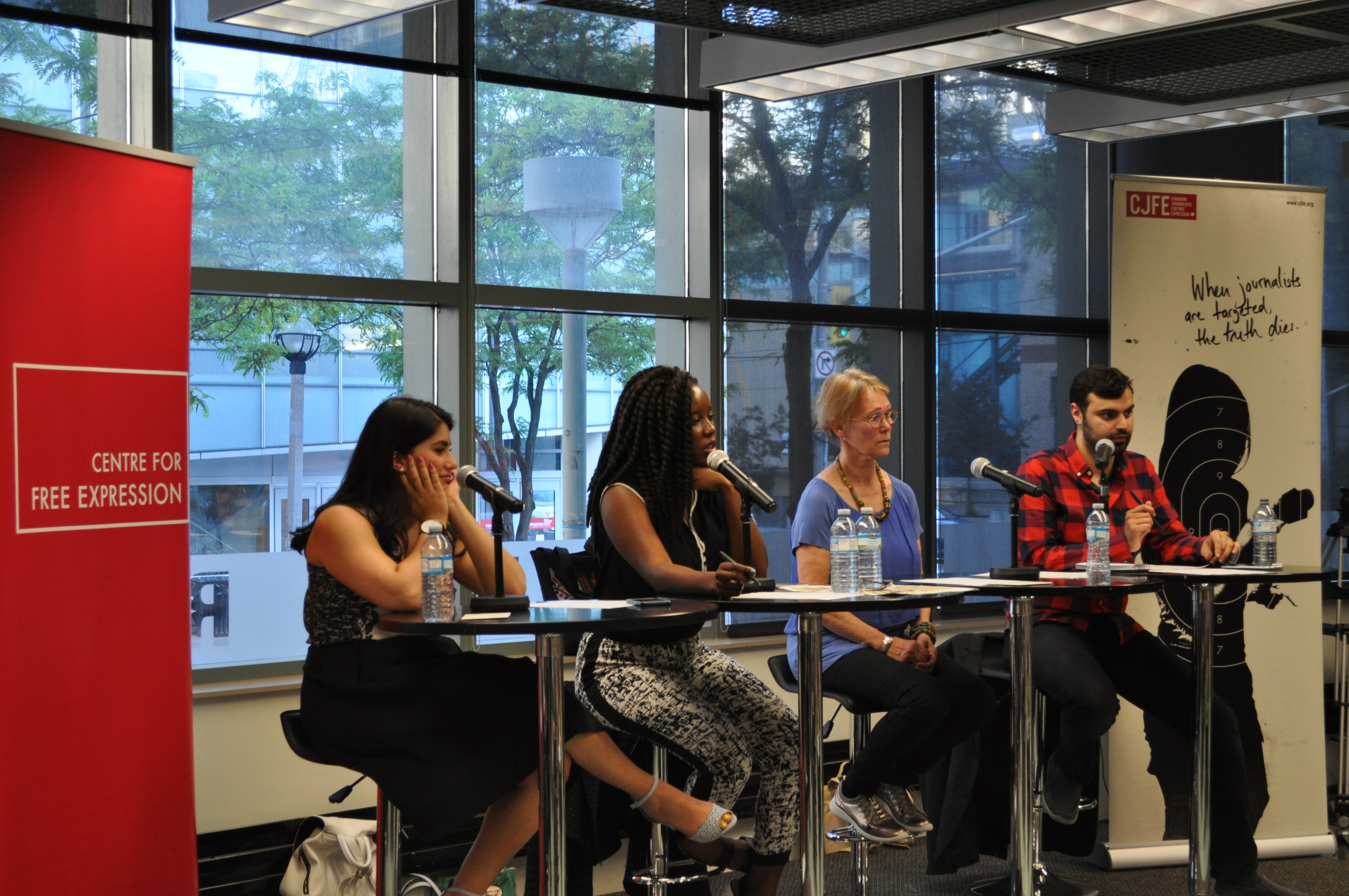 On June 7, CJFE hosted a panel discussion asking, “Is the free marketplace of ideas in a depression?” The panellists—Osgoode Hall Law School professor and constitutional scholar Jamie Cameron, Buzzfeed Canada culture writer Scaachi Koul, Metro News national columnist Vicky Mochama and moderator, Buzzfeed social news editor Ishmael Daro—discussed whether the marketplace of ideas is now broken to the point where the best ideas no longer rise to the top–or, for that matter, whether it has ever worked the way it’s supposed to. Here are some of the top quotes and takeaways:

“Expressive material travels at the speed of light, and mutates along the way. The marketplace is everyone, everywhere right now.” –Jamie Cameron

At its core, the free marketplace of ideas holds that it’s dangerous to exclude points of view that we dislike or disagree with, and ideas will be culled or will rise to the top through widespread public discourse and acceptance. The concept is protective of free speech, and for Cameron, framing and protecting free expression through it makes sense in principle—if perhaps only in principle.

“The question now is whether it still has salience,” she surmised. The world has changed drastically in the century since the concept was developed. Expression now spans the globe at the speed of light, intolerance begets further intolerance, and there is no clear view of what constitutes legitimate harm.

“If I thought the best ideas were coming to the top of the pile, then the National Post wouldn’t have posted four pro-appropriation articles in one week.” –Scaachi Koul

For Koul, a free marketplace of ideas amounts to whether everyone feels like they’re being seen and heard by the media around them. In her view, that still isn’t happening. While the internet has created new and broader spaces for the marketplace of ideas to play out, there are still gatekeepers that prevent marginalized voices from being seen in a larger context, and it’s vital that we fix this situation. “For a lot of us, media is the only mirror we have,” she pointed out. “It feels really essential, and I feel like we’re all being failed.”

“The marketplace of ideas was always broken. The underlying problem has always been how power perpetuates itself in certain systems.” –Vicky Mochama

Mochama framed the marketplace of ideas in terms of power structures wherein the best ideas have never risen to the top. Progressive, apparently modern movements like feminism and anti-racism aren’t new–the marketplace of ideas has just never rewarded them with the same saliency and dominance it has always afforded the status quo. The transmission and exchange of ideas are not neutral, but rather entrenched in power dynamics, wherein the players on top have an investment in protecting their power.

“[It] was supposed to explain why anyone and everyone, and those who are unpopular and marginalized, should be able to have the freedom to say what they want up to the brink. But the reality is otherwise.” –Jamie Cameron

In principle, the free marketplace of ideas is supposed to ensure space for all speech, regardless of who it’s coming from. If all ideas had equal opportunity to be heard and debated, then perhaps one could trust the democratic community to ensure the bad ideas are discarded and the good ideas rise to the top. In practice, however, that isn’t always the case, because not all ideas are equally heard.

“It’s an access issue,” Cameron said. Gatekeepers exist in both private and public media institutions, and they exert power over whose voice will be heard and whose will not. As a result, marginalized voices do not enjoy the same platform that dominant voices do.

Mochama reiterated that existing power structures ultimately confound any “neutral” dissemination of ideas, and challenged the notion that the most widely held views are necessarily the best ones: “Slavery was a bad idea from day one.”

“Most people are challenged daily. The ‘bubble’ is how much you internalize it.” –Vicky Mochama

With modern technology and social media platforms, people can easily insulate themselves to only those ideas that they like. Cameron noted the dangers of only every encountering the same ideas: “When things get repeated, they tend to believed. Repeating lends credibility. The only thing you have to do is reinforce.”

However, Mochama contended that people are exposed to information that challenges their views all the time. If “filter bubbles” exist, it’s up to people to identify and navigate them. For her part, Koul considered whether some people should be trying to get out of their bubbles more than others. “I know enough Nazis,” she remarked. “I’m good. Make them do it.”

“The best ideas don’t come to the top because they’re not there, because we don’t feel we can give them to you.” –Scaachi Koul

Several times, the discussion touched on the recent “appropriation prize” incident, and the lack of diversity in mainstream media more generally. As Koul argued, if the marketplace of ideas is in a depression, this lack of diversity is at least partly to blame: “You have these situations of white people in power [in major media institution]. They help each other out.” Meanwhile, non-white writers struggle to reach those platforms and profit from their ideas, so they often turn to their own communities instead. As a result, the mainstream “marketplace” deprives itself of a whole wealth of ideas.

The appropriation prize debacle did yield one positive outcome, in the crowdfunding of the Emerging Indigenous Voices Award. Cameron suggested that this was an example of the marketplace of ideas working the way it should: harmful speech being countered with more speech.

“I like to think there’s been some embedding of insight, perspective and compassion,” she said. “I don’t see any reason why that can’t be grown further. I think what I saw was a bit of a will there.”

However, for Mochama, the award is only a small step forward on the long way to correcting the lack of diversity in media. “Decades of harmful conversations happened before that moment of reckoning,” she pointed out. “If there is a little sliver of hope embedded in the aftermath, it is a literal needle in a haystack, because there is so much nonsense built into the foundations all the way up to the top of those buildings.”

“The issue is with the institutions. There’s rot in them, at a very high level.” –Scaachi Koul

“If diversity is our strength, the people who hold our public figures to account should talk about that.” –Vicky Mochama

In response to shrinking newsrooms and the decline of legacy media, the Canadian federal government has considered some form of funding for major news sources. However, there was skepticism across the panel as to how effective of a solution this would be. Koul argued that newspapers can’t save themselves unless they address their diversity problem first.

“From a business perspective, you’re going to fail if you don’t start speaking to the people you’re supposed to be speaking to,” she said. Yet even as major media revenues continue to dwindle, there seems to be an unwillingness to even attempt to cater to broader and more diverse audiences.

“There’s no dialogue when it’s just a fight to the finish to see who can silence who. That’s not very constructive.” –Jamie Cameron

In terms of moving forward to a free marketplace of ideas that better matches reality to theory, Koul was optimistic. She sees a flashpoint like the appropriation prize incident as ideal, wherein voices that have been marginalized for too long swing back in a meaningful way. In the meantime, she remarked, it would be helpful if “white men didn’t treat communication as if it’s a zero-sum game.”

In response to an audience question on pushing through your own “bubble,” Cameron emphasized the importance of dialogue and of confronting views different from your own on issues that you care about. “That’s really what counter speech is about, and that’s how the ideas you are bearing witness to get deflated,” she said. “I think it’s very important. I would even go so far as to say a bit of a civic responsibility.”