Reforms emerging from 2010 G20 protests must be acted upon 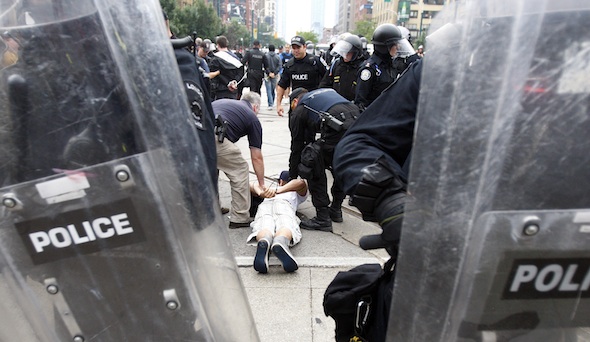 By Stefan Rinas June 26 marked the three-year anniversary of the G20 summit in Toronto. The legacy of that momentous weekend in 2010 is still being formed through lawsuits, legislation, civil complaints, and policy changes. The G20 saw one of the most widespread affronts to civil liberties in Canadian history, including those guaranteeing freedom of expression and the press. These violations gave rise to intense scrutiny of those responsible; whether this will result in systemic change is yet to be seen. In the wake of the G20 summit numerous individual private lawsuits were filed against different police organizations in relation to incidents alleged to have taken place during the summit. Two substantial class action lawsuits were filed. One, seeking $45 million in damages, was denied certification; another, seeking $115 million has been stayed. The following summarizes the remaining cases.

Resolved and ongoing private lawsuits from the 2010 G20 Summit in Toronto:

2010 Environmental activist Natalie Gray brings numerous claims, including assault and battery, against the Toronto Police Services Board. Her case is ongoing. The Ontario Special Investigations Unit (SIU) – a civilian law enforcement agency that conducts criminal investigations into circumstances involving civilians and police in limited circumstances – investigated six incidents involving protestors injured during the G20. The SIU director is reported as having found excessive force to be present in two of the cases, but was unable to identify the officers involved. 2011 Protestor Courtney Winkles sues the Toronto Police Services Board (TPSB) for $100,000 for false arrest and violations of her rights under the Canadian Charter of Rights and Freedoms. Her case is currently in the pretrial stage. Luke Stewart, who also filed a claim against the TPSB, alleges that he was unfairly subjected to a personal search. His case is in the process of being moved to the Ontario Superior Court. British filmmaker Charlie Veitch sues the Ontario provincial government and the Toronto police. His case has settled under confidential terms. After reopening an investigation into the injuries sustained by Canute Fernandes, the SIU concludes that there are no reasonable grounds to believe any officer had committed a criminal offence in relation to his injuries. 2012 A group of seven female protestors sues the Toronto police claiming unfair profiling on the basis of physical features. The case is ongoing. A human rights claim brought against the Toronto police by a paraplegic man is settled under confidential terms. Toronto lawyer Nicholas Wright sues the Toronto Police for unlawful arrest and later settles. Jason Wall, who claimed to be the victim of an illegitimate arrest based only on his wearing a bandana, settles his lawsuit again the Toronto Police. 2013 G20 protestors Nikos Kapetaneas, Caitlin Morgan, and Anna Grychtchenko, who each claimed to be the victims of excessive force by the Toronto police, settle their cases under confidential terms. Toronto Police Constable Glen Weddell is found not guilty of aggravated assault and assault with a weapon in relation to injuries sustained by Dorian Barton during a G20 protest. The trial of Constable Babak Andalib-Goortani relating to the alleged assault of Adam Nobody continues. Toronto Police extradite and arrest U.S. citizens Kevin Chianella and Richard Dean Morano on charges relating to their alleged participation in riots occurring during the G20. More than 48 civilians are convicted in connection with incidents during the G20 to date; 200 have had their charges dropped.

The Office of Independent Police Review Director investigated 356 complaints relating to incidents that occurred during the G20. Of those, 107 were deemed to be substantiated – that is, there were reasonable grounds to believe that misconduct occurred; 96 warranted police hearings. Recently, an Ontario Divisional Court judge ordered that an OIPRD complaint made by Jason Wall (see above) must be reexamined, and stated that OIPRD director Gary McNeilly’s initial refusal to examine the complaint “breached fundamental principals of fairness.” The OIPRD received 15 complaints from the media in relation to the G20 summit. In its review of the G20 it stated that the complaints from media members “appear to reflect possible misunderstandings [by the police] of the media’s entitlement to report and film events.” As a complement, in its recommendations the OIPRD stated: “Police services planning for security at large events should ensure that accreditation of all media…is handled by one office. The accreditation, once issued, should be respected by police.” Among the recommendations made as part of the Toronto Police Service’s G20 After Action Report, none mention the media. Nor do any of the recommendations made as part of the Standing Committee on Public Safety and National Security’s Toronto Star reported preliminary work to be underway to implement them. No public complaints against the RCMP in relation to the G20 reached a disciplinary stage. The Toronto Police Service (TPS) issued ten recommendations as part of its G20 After-Action Review. TPS Chief Bill Blair has said that they are all in the process of being implemented. The recommendations discuss, in part: the enhanced training of specialists in major events; conducting a review of public order management in relation to Black Bloc tactics; developing and implementing procedures of identifying and extracting individuals in a crowd believed to pose a threat to public safety; development of operational plans for large temporary detention centres. Chief Blair has also stated that the TPS will no longer engage in “kettling,” a process where police forcibly contain protestors within a restricted area. The OPP issued an After Action Report in relation to the G8 and G20 Summits, but it is unclear whether any of its recommendations have been adopted. Following the G20, numerous reviews were conducted analyzing the various legal regimes bearing on the rights of authorities and protestors. For example, the report of the Ontario ombudsman Andre Marin concluded that Regulation 233/10, which was passed in advance of the G20 and enlarged various authorities of the police, was “likely unconstitutional.” Ombudsman Marin also stated: “The effect of Regulation 331/10, now expired, was to infringe on freedom of expression ways that do not seem justifiable in a free and democratic society.” Regulation 233/10 has since expired. It was passed under the auspice of the Public Works Protection Act (PWPA), a sweeping law passed in response to Canada’s entry into World War Two. In his report on the PWPA commissioned by the Ontario Minister of Community Safety and Correctional Services, former Ontario Chief Justice Roy McMurty stated that it had been used “for purposes beyond its original intent” and failed to strike a “required balance with individual rights and freedoms.” Later, Bill 34, which repeals the PWPA, was tabled. It has been ordered for its third reading. Conclusion The impact of the 2010 G20 Summit (and the ensuing protest and police action) in terms of accountability and systemic change has been gradual and incremental. While experiencing limited victories, members of the media benefit from every court case won against those responsible for violating civil liberties during the G20. These results somewhat mitigate the chilling effect that could have been cast over the participation of the public and the media in future large-scale events. The body of analysis resulting from the G20 is variously impressive and underwhelming. However, it will require our collective, continued scrutiny to ensure that the various police forces and authorities truly do reform and act on the recommendations made. Otherwise, we will have learned nothing and the potential for widespread abuse of power over protestors and those who cover them, remains. <a href="http://cjfe.polldaddy.com/s/protest-rights-at-home-abroad-a-civil-liberties-quiz">View Survey</a>

Question 1 Answer: B 24 hours is the maximum allowable time for detainment. So “b” is generally correct. But if you have been detained for a breach of the peace, the Office of the Independent Police Review Director has cited a decision from the British Columbia Provincial Court as suggesting that detainees must be released as soon as the risk of their committing a further breach of the peace has passed. (OIPRD G20 Systemic Review at 137, citing R. v. Gross). Question 2 Answer: A According to CTV, around 800 people have been assessed $637 fines for taking part in illegal protests in Montreal this year. Question 3 Answer: D None of the above. The United Kingdom has similar legislation relating to public processions, but not assemblies. Bahrain only requires those planning a public assembly to provide prior notice and obtain authorization. New York City police are allowed to contact you to obtain information regarding events held on public property, but there is no requirement to respond to that request.

Free Expression: Canada G20 Freedom of Assembly Search and Seizure Threats and Attacks type-feature Free Expression and the Law type-blog_entry
Do you like this page?
Tweet