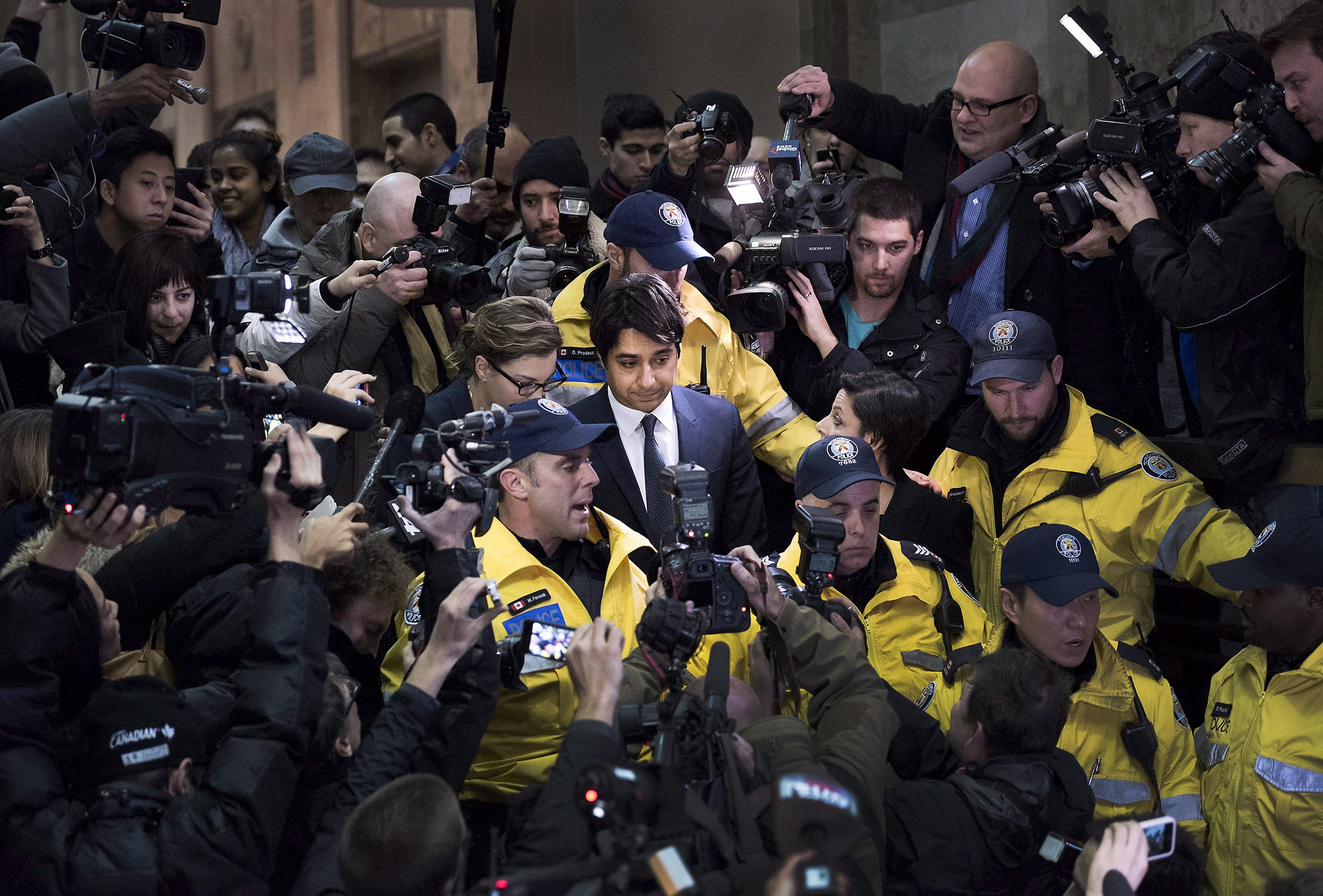 Former CBC Radio host Jian Ghomeshi, centre, is escorted out of court after being released on bail in Toronto on November 26, 2014. A book on the disgraced former radio star, written by Toronto Star investigative reporter Kevin Donovan, is slated for release this year. PHOTO: CP/Darren Calabrese

The shocking sexual assault allegations against Jian Ghomeshi might never have become public knowledge if independent journalist Jesse Brown hadn’t teamed up with the Toronto Star to publish the story.

Brown had been producing CANADALAND, a podcast and website focused on media criticism, and as the Ghomeshi exposé came together, Brown knew he’d need legal protection to publish it. The arrangement with the Star meant he would be covered by the newspaper’s full-time lawyer. “I wouldn’t have reported it without some kind of [legal] protection. Had it been CANADALAND alone, I’m certain Ghomeshi would have sued,” Brown says.

Freelancers and independent journalists are writing major stories in the public interest, but they often find themselves on precarious footing if publishing independently or the contract they’ve signed with a news organization does not include provisions for defending against libel lawsuits. They are also further hamstrung by a lack of deep pockets with which to challenge barriers to information, likepublication bans, sealing orders and fees related to access to information requests.

Since the Ghomeshi story broke in October 2014, CANADALAND has evolved from a small-scale podcast into a better-funded media outlet with a second reporter. This growth, fuelled by a crowdfunding effort, is thanks in part to risky, high-profile pieces Brown reported. He now has some pieces lawyered and is arranging for libel insurance for CANADALAND, which would cover legal costs and damages should someone launch a libel suit over something he publishes.

Brown’s team-up with the Star caused Don Genova and others at the Canadian Media Guild—a national union that represents both freelancers and staffers—to consider how the guild could better support freelancers facing legal and other risks. As Genova, president of the guild’s freelance branch, says,

“When the Ghomeshi story broke, we all started thinking about it a lot more. We all thought, ‘Well, there’s Jesse Brown: he’s sitting on this story, which definitely has legal ramifications—could he even afford to have a lawyer spend the time going over a story to point out highlights?’ Lawyers are not cheap.”

The guild is working on an insurance plan with Ingle International to offer member freelancers libel protection (as well as coverage for other things, like travelling to dangerous areas). The launch date and coverage details have yet to be confirmed. “We represent a wide variety of people, and they’re working increasingly without a safety net,” says Genova.

Libel insurance is prohibitively expensive, says David Hayes, a freelance journalist working in Toronto. “I looked into it once out of curiosity—it would have cost astronomical amounts of money. It’s out of the question for the individual,” he says. “I don’t know anyone who’s covered.” He pays close attention to the language in his contracts, particularly when reporting risky stories, to see whether they include protection from lawsuits. Without insurance, going out on a limb for an important story can be daunting for both the writer and the publication they’re pitching to, thus limiting free expression.

You’re On Your Own

When a lawsuit is filed, it usually targets both the journalist and the publication. Freelancers face a risk that those on staff at a news organization don’t typically have to worry about: if their contract doesn’t guarantee legal protection, freelancers may be cut loose—and they’re responsible for financing their own defence.

The risk for a freelancer without protection can be immense. Journalist Laura Robinson has already racked up more than $250,000 in legal fees fighting a lawsuit launched by John Furlong, who was CEO of the Vancouver Winter Olympics, over an article for which she was paid $2,500.

Robinson wrote a story for the Georgia Straight, a weekly publication in Vancouver, alleging that Furlong had a dark past as a notorious teacher at a school where the majority of students were Aboriginal. Furlong, who has denied any wrongdoing, sued both Robinson and the Straight for defamation. Robinson was not covered under the publication’s insurance—something she knew before the piece ran.

Furlong dropped his suit against the Straight about a year after he filed it, but he “accelerated” his suit against Robinson. His public comments about the journalist prompted her to file a countersuit, further increasing legal fees.

“Defending freedom of expression, responsible journalism and fair comment has been my full-time job since Furlong filed his suit in November 2012,” Robinson wrote in an emailed statement. “Civil societies must protect freedom of expression. We need to work with organizations such as CJFE, CAJ, PEN Canada and The Writers’ Union to create insurance that all professional writers and journalists can access.”

Shortly after the last of the civil actions against Furlong by alleged victims was dismissed in late March 2015, he dropped his suit against Robinson. Robinson, however, plans to continue with her countersuit.

To protect themselves, freelancers should be proactive about their contracts, says Derek Finkle, founder of the Canadian Writers Group. Some clauses can eliminate the publication’s responsibility to protect the journalist, and a single word can make all the difference.

“The truth of the matter is, especially younger freelancers, they don’t really read the contracts. I think people get so excited about the potential of doing a big story… a lot of journalists just have this blind faith that there’s going to be some sort of ‘gentleman’s agreement’ and they will be taken care of. You can’t assume that.”

Finkle represents freelancers writing for magazines and newspapers and has been part of contract negotiations with major media organizations like the Toronto Star, Reader’s Digest and Rogers Media. He cautions against signing contracts that stipulate that the writer will not defame anybody. “If they have an indemnification clause that indemnifies them in the event you defame someone or infringe on someone’s copyright, I try to insert the words ‘will not knowingly libel any party.’ Then they would have to prove intent.”

Finkle says one of the biggest challenges to freelancers is the lack of resources for in-depth investigations. “The type of story we think of as being associated with libel—exposés—those types of stories have really fallen by the wayside for freelancers for the most part anyway because they’re expensive to do, magazines don’t have the budget to do them and there’s so few of them that it’s very difficult to string a career doing investigative pieces.”

A 2006 survey of freelance writers by the Professional Writers Association of Canada found that the average income was $24,035. (Many may have other jobs or sources of income.) Perhaps more important is the fact that freelance rates have not changed significantly since the 1980s, according to Hayes, staying around roughly $1 per word. For freelancers, each story is an investment of time and resources, with a payoff that will only come if someone buys it.

Iain MacKinnon, a media lawyer with Chitiz Pathak, notes that freelancers face major barriers when it comes to accessing certain information in courts. If a publication ban or sealing order is put in place, journalists need a legal application to gain access. “That’s a real problem. The mainstream media outlets are really the only ones with the resources to challenge publication bans [and] bring applications for access to court documents.”

Freelancers may be able to ask the publication they’re writing for to fund the legal challenge, says MacKinnon. “Then the media outlet has to decide how critical it is for the story to do that.”

Budget cuts over the past decade mean that news organizations are less likely to spend the money to challenge court orders restricting access to information, MacKinnon adds. “Even [major] outlets—their resources are drastically reduced from what they were 10 or 15 years ago because they don’t have the same profits or resources. For a freelancer, it’s really difficult—virtually impossible.”

Tim Alamenciak (@timalamenciak) is a digital media producer for TVO in the Current Affairs & Documentaries department. Previously, he was a staff reporter with the Toronto Star.

This piece originally appeared in CJFE's 2014-15 Review of Free Expression in Canada.