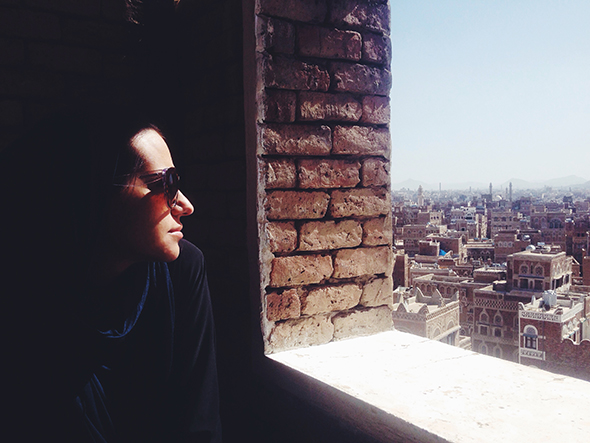 Each year CJFE bestows an International Press Freedom Award in recognition of the courage of journalists around the world who work tirelessly, at great personal risk and against enormous odds, simply to produce the news.

Safa Al Ahmad is a Saudi freelance journalist and documentary filmmaker who has produced several documentaries on uprisings in the Middle East, most notably in Saudi Arabia and Yemen.

Al Ahmad’s 2014 documentary about a largely unreported mass uprising in Saudi Arabia’s Eastern Province (produced for the BBC) was instrumental in bringing international attention to the large-scale violence meted out to peaceful demonstrators. In making the film, titled “Saudi’s Secret Uprising,” Al Ahmad was able to gain unprecedented access to activists and bring their story to the world.

Filming this documentary, Al Ahmad faced risks from all sides; not only is travel by a woman alone in Saudi Arabia strictly limited and likely to attract unwanted government attention, but travelling with footage of the protests opened her up to arrest and arbitrary detention.

Following the airing “Saudi’s Secret Uprising,” Al Ahmad became the victim of violent and repeated online threats; she has been accused of being a heretic, of aiding terrorism and a slew of other charges typically levelled against Saudi dissidents and critical voices. Since releasing the documentary, Al Ahmad has not been able to return to Saudi Arabia after being repeatedly warned against doing so.

While working on her most recent documentary on Yemen, “The Fight for Yemen,” Al Ahmad was one of the few journalists reporting to international news organizations from the ground during the latest escalation of the crisis between Houthi rebels, militant groups and the government. Al Ahmad was able to negotiate rare access to Houthi rebels as they advanced throughout the country, but she also faced threats in her quest to achieve a balanced report in such a precarious security situation—Houthi militiamen detained her for four hours after she attempted to interview a caretaker of a mosque whose imam had recently been ejected, and the politician who housed her while she was working in Sanaa was assassinated during the course of her work there in an attack unrelated to her presence.

In reporting on the Middle East, Al Ahmad offers an important perspective that counters the typical narrative of sectarian reductionism espoused in large part by international and Arabic news outlets. She contends, “It has become nearly impossible to do a story without talking about Sunnis and Shia. But sectarianism is used as a tool, as a weapon, to further confuse and tangle an already complicated political landscape. It has become acceptable reductive language in the media…to explain our world.” As an alternative, Al Ahmad offers a more nuanced perspective based both on her status as an Arab woman and her commitment to firsthand access to the very power players who drive these struggles in the Middle East.