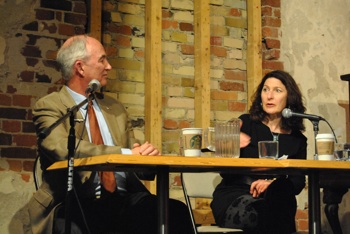 By Sara Jaffri Last night CJFE hosted Canadian Science in Crisis: Research, Responsibility and the Right to Speak, featuring acclaimed climate scientist Dr. Gordon McBean. Conducted as an interview by Anna Maria Tremonti, a member of the CJFE Board and co-host of CBC Radio’s The Current, the discussion highlighted a number of challenges the scientific community faces in speaking to the media and openly participating in shaping public policy and discourse.

Here are some of the key takeaways from Dr. McBean’s interview:

1) Government scientists are being muzzled

Government scientists in Canada do not have the freedom to talk to journalists independently, or to openly speak about their work. Dr. McBean emphasized that the federal government has taken newer and more repressive measures to control what government scientists say to journalists, including requiring questions for interviews to be submitted in advance and answers to be reviewed by the Prime Minister’s Office.

Nowadays, government scientists are not allowed to talk to any member of the press without permission from the PMO.- Dr. McBean #CJFE

2) Academia is unable to fill the gap

Funding for science is being cut in academia and the annual amount for research grants is at an astonishing low – less than half of what it once was. Dr. McBean emphasized that the lack of funding for academic scientists combined with the climate of muzzling government scientists is seriously damaging the momentum required to generate and sustain cutting-edge research. In addition, scientists are not being recognized or encouraged to speak at public events and conferences – an incentive structure that needs to change to encourage scientists to interact more with the public.

The funding to Canadian academics is less than half what it was. - McBean #CJFE

3) Canada’s scientific resources are falling behind

Canada does not have an equivalent for reputable national scientific organizations like the Royal Society of London in the United Kingdom. The Royal Society of Canada is limited by a lack of independent resources, while federal budget cuts are threatening the future of other scientific associations. Furthermore, Dr. McBean believes that Canada is losing its international competitiveness by a failure to fully involve science in its policy.

The very thing our government says it needs to do for competition is what hurts Canada's competitive edge down the road. #CJFE

4) Scientists are reacting to the restrictions

Wanting to avoid the arduous process required to gain permission to speak out, many scientists choose not to engage with media at all. Feeling the restrictions, some scientists are leaving their government positions, while others are collectively trying to build up momentum within the scientific community. Last year’s “Death of Evidence” demonstration on Parliament Hill in protest of federal budget cuts is a significant example of this collective action. Dr. McBean believes that scientists need to stick together and not be afraid of speaking out.

Scientists need to speak out, and be more willing to collectively speak out. - Dr. McBean #CJFE

5) We need access to information to make informed decisions

As the Canadian public, we need to support free and fair science and recognize that stifling scientists’ freedom to interact with journalists drastically affects public access to science as well as the quality of journalism. We need to think of our economy and society and the production of scientific knowledge as a whole, and intensify efforts to make science a public good. Dr. McBean stressed that although scientists can protest, real change won’t come until the Canadian public decides to demand it.

I don't think we'll see change when scientists are upset, but when Canadians are upset and demand change. - McBean #CJFE

Missed the event? Watch the video