Sisters in Spirit and the search for answers 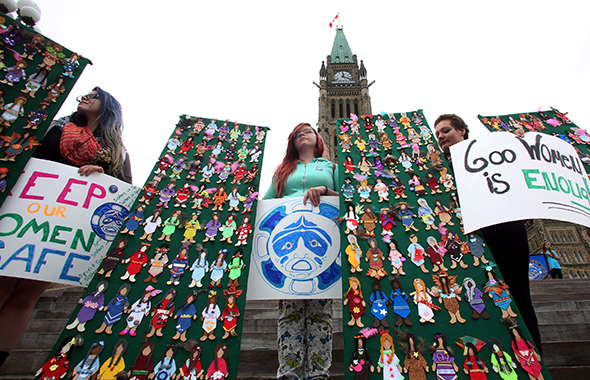 Women take part in a rally on Parliament Hill in Ottawa on October 4, 2013 by NWAC honouring missing and murdered aboriginal women and girls. PHOTO: CP/Fred Chartrand

Before the empty hallways of courthouses, the RCMP investigation rooms, and the chambers of Parliament, there were dimly lit kitchens.

For years, communities in Canada knew that their women were being violently targeted in numbers far outweighing their white counterparts. They would sit around tables, in feast halls and at potlatches, talking about who was taking their daughters and what they could do to stop it.

“As I was growing up in northern B.C., I knew there was a phenomenon where [indigenous] women were missing and being murdered my entire life,” says Gladys Radek. Radek, 59 and a member of the Moricetown First Nation, does not speak about this issue in abstract terms; her niece, Tamara Chipman, has been missing since 2005.

“When Tamar went missing, I didn’t want people to forget about her,” Radek says. To that end, she’s become an activist focused on raising awareness of missing and murdered indigenous women (MMIW) in Canada,even organizing a 4000-kilometre walk from Vancouver to Ottawa in 2008.

Tamara’s disappearance does not represent an isolated incident. According to a May 2014 report by the RCMP, the number of MMIW in Canada is roughly 1,200. If this number existed in a vacuum, it would be shocking; but when put in proper context, it’s even more horrifying: it suggests that Aboriginal women are being specifically targeted.

Since its inception in 1974, the Native Women’s Association of Canada (NWAC) has focused on raising awareness of, and advocating change for, the treatment of First Nations women in Canada.

“In my view, NWAC is our only federal voice,” Radek says. “And they’ve been trying relentlessly over the years to try to raise attention over this issue.”

The epidemic of MMIW wouldn’t be as prominent as it is in our current cultural discourse without NWAC’s work. But creating that awareness hasn’t been an easy path.

Michèle Audette, president of NWAC, says she recalls the first time the issue of MMIW was brought forward in any formal sense. Terri Brown, Chief of Tahltan First Nation and former president of NWAC, came to the organization with stories of women disappearing in Vancouver’s downtown eastside. They held a roundtable discussion with representatives from across the country and discovered a chilling trend: what was happening in downtown Vancouver was happening from coast to coast.

“We decided to bring this to light and bring it to people and tell them what’s happening in the east side [of Vancouver] is happening all over Canada,” says Audette.

When they first started the tireless work of canvassing and advocating for change, Audette says it was hard to garner attention. The first significant uptake in public awareness came when Amnesty International released a report in 2004, detailing the shockingly high rates of abduction and homicide faced by First Nations women in Canada.

But the biggest effects were felt in 2010, after five years of groundbreaking research conducted by NWAC through the Sisters in Spirit project. This initiative was the first attempt at capturing data on every indigenous woman who has either gone missing or been murdered in Canada since 1980. In total, 582 cases were documented. Once the RCMP involved themselves years later, this number would prove to be optimistically low in retrospect.

Despite the irrefutable evidence — the many reports and studies, dozens of vigils and walks, and the mounting databases — police and government authorities were slow to take action. In fact, the federal government still refuses to acknowledge the existence of a specific cultural problem.

"It is crime, against innocent people, and it needs to be addressed as such," he said.

But many disagree with his reductive approach.

Sterritt points to the infamous Highway of Tears as one example of the many issues at play: officials are aware that women who hitchhike are being murdered, so they put up signs advising against hitchhiking, but without changes to transportation infrastructure these women have no alternate means of getting from community to community.

A 2013 report by Journalists for Human Rights suggests that the lack of widespread knowledge on these issues is not altogether surprising. The study looked at media coverage of Aboriginal issues in Ontario and found that “...the Aboriginal population is widely underrepresented in mainstream media. With a cumulative average of just 0.28% of all news stories produced by news outlets in Ontario from June 1st, 2010 to May 31st, 2013, it is clear that Aboriginal-related stories are barely on the radar of most media outlets.”

This makes NWAC’s accomplishments all the more impressive—they have managed to shine a light on issues that haven’t been given their due credit by most media outlets. But when you consider the spirit at the helm of NWAC’s activities, this isn’t altogether surprising; they’re nimble, they’re scrappy and they’re willing to push years of anguish aside to accomplish their goals.

Part of this approach includes embracing a process of reconciliation. Audette emphasizes that, instead of shutting out the RCMP over frustrations that their numbers were inaccurate, it was important to “extend our hands” and work together. This collaboration led to the release of the RCMP’s now infamous report revealing the startling figure of 1,181 missing and murdered indigenous women in Canada over the past three decades.

It’s difficult to feel optimistic in the face of such gruesome numbers, but they at least represent progress. And there is further cause for hope. NWAC recently announced a partnership with the Canadian Association of Chiefs of Police, calls for a national inquiry into MMIW are getting louder and harder to ignore, and Gladys Radek remains hopeful that her niece will come home.

“I’m still very optimistic that we’ll find her,” she says.

But this optimism is not wide-eyed: it’s tempered with the realism of a life seasoned by institutional hardship. She knows that many believe if Tamara is to be found, she may be yet another murdered woman added to a database. But Radek pushes these thoughts away and chooses to embrace the light.

“Until they can prove to me that she’s dead, in my heart she’s always going to be alive.”

Miles Kenyon (@MilesJKenyon) is a radio and digital journalist based in Toronto.