The Snowden Archive is a collection of all documents leaked by former NSA contractor Edward Snowden that have subsequently been published by news media.

Welcome to the Snowden Archive!

The Snowden Surveillance Archive is a complete collection of all documents that former NSA contractor Edward Snowden leaked in June 2013 to journalists Laura Poitras, Glenn Greenwald and Ewen MacAskill, and subsequently were published by news media, such as The Guardian, The New York Times, The Washington Post, Der Spiegel, Le Monde, El Mundo and The Intercept. The leaked documents and their coverage have raised significant public concerns and had a major impact on intelligence policy debates internationally over issues of freedom of expression, privacy, national security and democratic governance more broadly. The Archive also contains some documents that the U.S. Government has published which are helpful in understanding the leaked documents. The Archive does not contain any documents that have not already been published in other sources. The approximately 400 documents currently in the Archive are a small fraction of the estimated 50,000 documents Snowden turned over. Most of these will likely not be published, but as new documents are published, they will be added to the Archive.

Why did we build this Archive?

Our aim in creating this Archive is to provide a tool that would facilitate citizen and researcher access to these important documents. Indexes, document descriptions, links to original documents and to related news stories, glossary and comprehensive search features are all designed to enable a better understanding of state surveillance programs within the wider context of surveillance by the U.S. National Security Agency (NSA) along with its partners in the Five Eyes countries – U.K., Canada, Australia and New Zealand. Our hope is that this resource will contribute to greater appreciation of the broad scope, intimate reach and profound implications of the global surveillance infrastructures and practices that Edward Snowden’s historic document leak reveals.

Who Built the Snowden Archive?

The Archive was designed and built by George Raine, a graduate of the Master of Information program in the Faculty of Information at the University of Toronto, with the assistance of Jillian Harkness, currently a student in this program.

Important note: The descriptions contained in this archive are the work of interested amateurs in the area of state intelligence, without detailed insight into the legal and technological issues that the documents describe. If readers identify any potential inaccuracies, they are encouraged to contact the curators, who will endeavour to improve the collection. The curators of the Archive have no special access to documents that are not already in the public domain. Redactions that occur in the documents have been performed either by government classifiers, or by the media outlets that first published the documents.

Project Partners • Canadian Journalists for Free Expression (CJFE) • The Politics of Surveillance Project in the Faculty of Information at the University of Toronto, led by Dr. Andrew Clement, a sub-project of The New Transparency: Surveillance and Social Sorting project, based at Queen's University, led by Dr. David Lyon 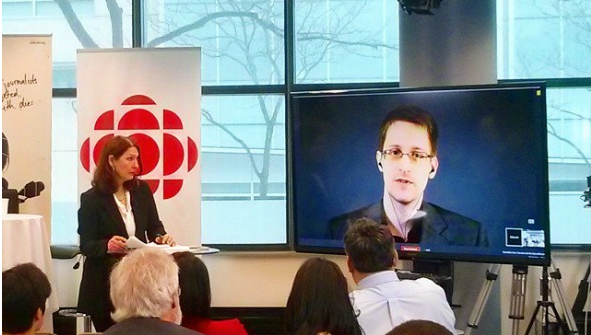 The official launch of the Snowden Archive, "Snowden Live: Canada and the Security State," featuring a live Q&A with Edward Snowden, took place on March 4, 2015, at Ryerson University in Toronto. The event video can be watched at cjfe.org/asksnowden.

We welcome your feedback!

If you think we are missing any documents in the archive, spot errors or otherwise have comments and suggestions to make, please contact us at: [email protected] VISIT THE ARCHIVE

The Snowden Surveillance Archive is a complete collection of all documents that former NSA contractor Edward Snowden leaked in June 2013 to journalists Laura Poitras, Glenn Greenwald and Ewen MacAskill, and subsequently were published by news media around the world. Read more

Two years after Snowden: the state of surveillance in Canada

Jun 05, 2015
Friday, June 5, 2015 By Sam Pinto June 5 marks the two-year anniversary of the first media leak of classified government documents from former NSA contractor Edward Snowden. The leaks have provided invaluable insight into the secretive world of government surveillance, including a hint of its broad scope in Canada.... Read more

Mar 16, 2015
On March 4, CJFE held a live Q&A with Edward Snowden to coincide with the launch of the Snowden Archive. Check out some of our favourite Snowden quotes about mass surveillance in Canada, Bill C-51 and the tools he recommends for protecting your privacy online. Read more

Mar 04, 2015
On March 4, 2015, CJFE held a live Q&A with Edward Snowden about the state of mass surveillance in Canada. Moderated by Anna Maria Tremonti, Host of CBC Radio’s The Current and CJFE Board member, Snowden answered questions from individuals in attendance at the event and submitted in advance via Twitter. Read more

Mar 03, 2015
Watch the full video of CJFE's live Q&A with Edward Snowden. Moderated by Anna Maria Tremonti, Host of CBC Radio’s The Current and CJFE Board member, Snowden answered questions from individuals in attendance at the event, and submitted in advance via Twitter. Read more

Feb 27, 2015
“Canada and the Security State” will foster conversation on surveillance in Canada TORONTO, ON – Canadian Journalists for Free Expression (CJFE) is hosting an event on the state of digital surveillance in Canada, featuring a live Q&A with Edward Snowden. NSA whistleblower, and subject of the Oscar-winning documentary “Citizenfour,” Edward Snowden has sparked an international conversation on surveillance, privacy, and national security. But in the wake of the Snowden leaks, what have we learned? Where are we headed? And what questions remain? Read more

A year since Snowden

Jun 05, 2014
On June 5, 2013, the first documents from Edward Snowden were leaked to the public. A year later, CJFE looks back at what we've learned about digital surveillance and offers some suggestions on how you can take back your privacy. Read more

Whistleblowers, journalists and the public's right to know

Jul 11, 2013
A piece on why whistleblowers are important, originally published at CBC News' Editor's Blog. Read more
type-page Edward Snowden campaign campaign-front campaign-sidebar
Do you like this page?
Tweet