Sports and free expression: The human cost of hosting the games 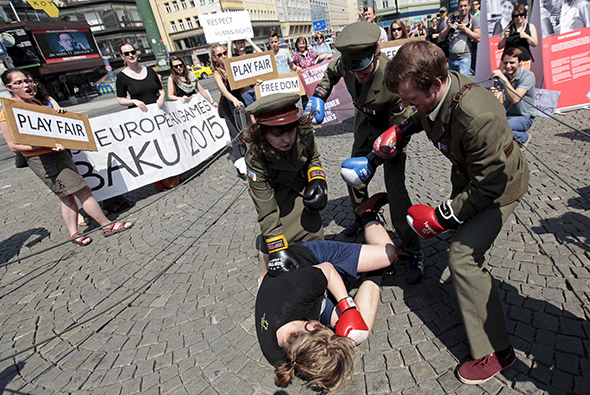 Activists, symbolically dressed as police officers and athletes, stage a protest to draw attention to human rights violations in Azerbaijan, ahead of the European Games in Baku, in central Prague, June 12, 2015. PHOTO: REUTERS/David W Cerny

The opening ceremony for the inaugural European Games were held in Baku, Azerbaijan on June 12, 2015. Notably absent from the ceremony were members of the European press. In the days leading up to the Games, Azerbaijan refused entry to journalists from The Guardian and other media outlets, as well as human rights activists and observers.

Leading up to the Games, the government of President Ilham Aliyev cracked down on dissent, arresting and threatening those who spoke out against the Azerbaijani regime. According to the Committee to Protect Journalists (CPJ) Azerbaijan is one of the 10 most censored countries in the world.

Currently serving a six-and-a-half year prison sentence for spurious financial crimes, human rights defender Rasul Jafarov launched the Sport for Rights campaign prior to his detention. While Jafarov’s work as an activist and advocate for individuals who have also been unjustly imprisoned put him on the Azerbaijani government’s radar, the timing of his conviction just three months before the opening ceremonies in Baku would suggest a connection to his campaign against the European Games.

Rebecca Vincent, coordinator of the Sport for Rights campaign, believes that international events such as the European Games open countries up to more scrutiny and shed light on human rights abuses. However, in the case of Azerbaijan, the Games also “[generated] some degree of intensified violations” of the right to free expression, resulting in the arrest of several human rights activists and journalists that Vincent and her colleagues refer to as “prisoners of the Games.”

In addition to Jafarov and several others, these “prisoners” include prominent activist Leyla Yunus and her husband Arif, who were arrested within days of Leyla publically calling for a boycott of the Games; the couple were arrested on trumped-up charges of fraud and tax evasion, amongst other things, in August 2014. On August 13, 2015 Leyla Yunus was sentenced to eight-and-a-half years in prison, while Arif was sentenced to seven.

Azerbaijani investigative journalist Khadija Ismayilova, who has reported for Radio Free Europe/Radio Liberty, was charged with similar crimes following her arrest in December 2014. At the time of her detention Ismayilova was reporting on the dubious financial practices of President Aliyev and his family; her trial, which has been riddled with procedural violations, is ongoing.

Outside of its poor human rights record and vibrant oil and gas industry, Azerbaijan had largely gone underreported in the mainstream media until recently, when the country hosted the Eurovision song contest in 2012 and were awarded the European Games that same year.

In the nine years Vincent has spent working on human rights in Azerbaijan, she says that the Games and the Sport for Rights campaign have had the biggest impact in terms of drawing attention to human rights issues in the country.

“It mainstreamed discussion of Azerbaijan’s human rights issues,” she says, adding that even sports reports that had nothing to do with human rights mentioned as accepted fact that the country is a site of terrible human rights violations.

The 2015 European Games in Baku is only the most recent example of countries with poor human rights records cracking down on journalists and activists to silence them ahead of major international events.

In advance of the 2014 Winter Olympics in Sochi, Russia, the Russian government silenced journalists and imprisoned numerous protestors and human rights activists. During the Games, very few activists spoke out, and the ones that did faced fierce backlash from security services. Russia is currently set to host the 2018 FIFA World Cup, leaving many observers wondering if the government will use a similar strategy to homogenize public discourse ahead of the event or turn to even harsher tactics.

If the Brazilian example is any indication, the climate for free expression will likely be hostile at best. Journalists were attacked and in some instances killed during protests ahead of the 2014 FIFA World Cup in Brazil, something that clearly points to a need for better protections for journalists covering demonstrations ahead of the upcoming 2016 Olympic Games in Rio de Janeiro. The Brazilian government has held workshops to train journalists on how to safely cover protests, and recent efforts have been made to fight impunity in the country. However, free expression in Brazil is still extremely precarious, and journalists continue to face threats and murder for speaking out against the government.

Looking ahead, Qatar is set to host the FIFA World Cup in 2022, and in doing so is perpetrating horrific human rights violations against the migrant workers building soccer stadiums: an estimated 1,200 people, possibly more, have died so far during construction. Meanwhile, journalists attempting to report on the treatment of migrant workers in Qatar have been detained and interrogated by Qatari officials. One news crew had their equipment returned to them nearly a month after their arrest, with all of their data erased.

Earlier this year, as concern from human rights activists grew over the clampdown on free expression in Azerbaijan, the European Olympic Committee (EOC) said that it was in no position to “pass judgment on the legal or political processes of a sovereign nation.”

And yet, one of the fundamental principles of the Olympic Charter is to “place sport at the service of the harmonious development of humankind, with a view to promoting a peaceful society concerned with the preservation of human dignity.” There is nothing dignified about Azerbaijan’s number of political prisoners, nor Qatar’s treatment of migrant workers.

While these sporting organizations are not solely accountable for the free expression and human rights violations that have occurred in host countries, Sport for Rights’ Vincent believes they have adopted policies of willful blindness. “There is an insistence from the sports world that it wants to be separate from human rights issues,” she says. “They do have an obligation if they’re going to go into a country, if they’re going to profit off of a country, to have some regard for the welfare of the people there and the impact of their events.” Michel Platini, President of the Union of European Football Associations (UEFA) and an outspoken advocate of holding the 2022 World Cup in Qatar, has said that it is better to hold sporting events in different parts of the world in order to spark change. While effecting change in different regions is ideal, evidence shows that doing it through major sporting events is not always effective. The European Games in Baku did spur an increase in international awareness and a positive step forward with prominent human rights defender Emin Huseynov being permitted in June to leave the Swiss Embassy in Azerbaijan, where he had taken refuge since August 2014, and take exile in Switzerland, but these victories are few and far between.

Hosting major sporting events did little to curb the threats to free expression and human rights in most cases, and in Russia and Azerbaijan actually gave the government greater cause to crack down on dissidence and anyone who criticized their administration or preparations for the Games.

With reference to Azerbaijan, Vincent says that now that the Games are over, attention is waning and, sadly, the government is not easing up on its repression of civil society. In addition to the prison sentences of Rasul Jafarov and Leyla and Arif Yunus, respectively, a state prosecutor is requesting a nine-year prison sentence for journalist Khadija Ismayilova.

Perhaps saddest of all is the news of the murder of Azerbaijani journalist Rasim Aliyev, who was beaten nearly to death by unknown persons on August 8 before dying in hospital several hours later after doctors failed to treat his injuries. The brutal beating followed three weeks of death threats; despite reporting the threats, the journalist was refused police protection by security officials.

Human rights campaigners are now calling on UEFA and Formula One to learn from the European Games and the issues raised there. Both organizations are set to hold major sporting events in Azerbaijan in the next few years. UEFA will hold four Euro 2020 football matches in Baku, but the organization has said they will retain the rights to accreditation of journalists in order to avoid a situation such as the one at the European Games. It remains to be seen whether Formula One will do the same, and whether either sporting organization will make use of their considerable voice and financial might to try to affect positive change in terms of human rights in the country.