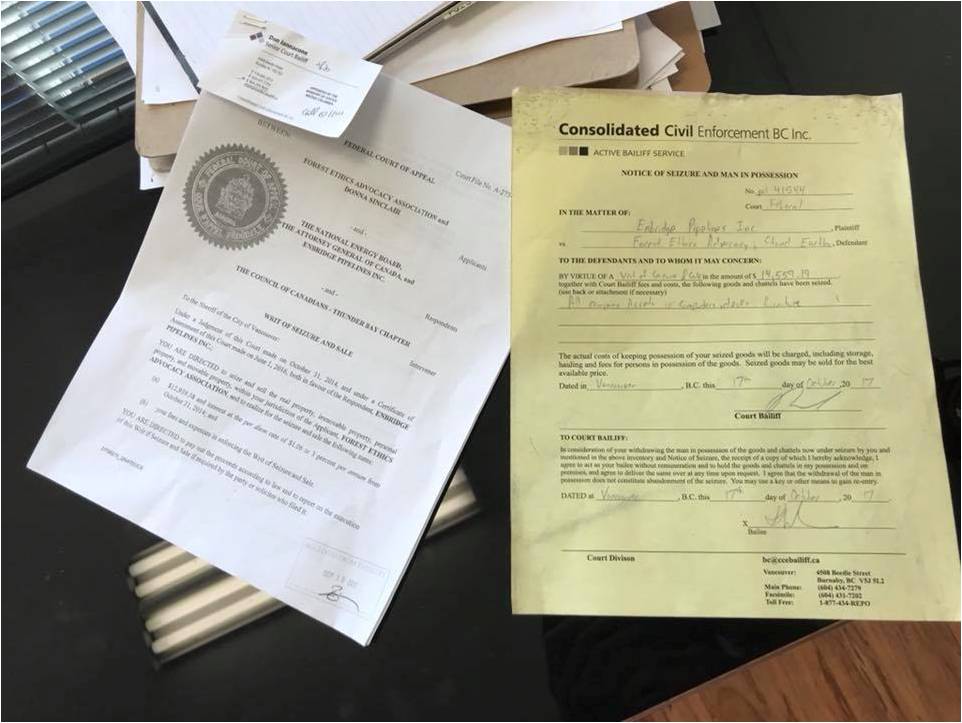 A copy of the Writ of Seizure as presented to Stand by RCMP bailiffs. Photo: Stand (Facebook)

On a quiet Tuesday afternoon, October 17, 2017, staff in the Vancouver office of environmental advocacy organization Stand.earth (formerly ForestEthics) were participating in an online call about campaign strategy. Only the day before, Stand had won an historic judgement in a lawsuit by forestry giant Resolute had targeted Stand and Greenpeace attempting to use anti-mob Racketeering Influenced and Corrupt Organizations (RICO) laws to silence their free speech. “We were all on a scheduled campaigns call,” said Virginia from Stand’s Bellingham, Washington office. “All the Vancouver staff said they had to go because the police were there.” The police were bailiffs equipped with a writ of seizure for Stand and the Thunder Bay chapter of the Council of Canadians, and they proceeded to take photographs of assets in the office including computers and employee workspaces. The police informed Stand staff that they were facilitating the seizure of assets on the request of Enbridge, Inc. and provided relevant supporting documents. The RCMP left and told staff they’d be back—with a truck.

Enbridge, an oil and natural gas company, had been previously involved in litigation with Stand. On August 17, 2017, a court decision authorized the RCMP to collect $13,000 in court costs through the seizure of the organization’s assets, on behalf of Enbridge. The value of those costs had been determined in a 2016 certificate of assessment. Stand board member Tzeporah Berman told CJFE that while the writ of seizure was a surprise, Stand was aware of the assessment and had made a conscious decision not to pay Enbridge, as they considered their lawsuit a principled stand in the public interest.

The lawsuit was filed in 2014 by Stand’s precursor ForestEthics and litigated by Toronto-based lawyer Clayton Ruby. The original lawsuit was a constitutional challenge about the threat to free speech from the federal government’s omnibus changes to the regulatory framework for pipeline projects. The lawsuit raised grave concern about the implications of a regulatory framework that limited intervention to only parties directly affected, significantly narrowed the definition of who was ‘directly affected’ and required applicants to complete a 12 page filing form before being allowed to write a letter or give written comment on a pipeline project. Berman described the regulatory changes as “Draconian” and pointed out that “the process to give comment to the federal pipeline regulator requires more paperwork than applying for Canadian citizenship.” That lawsuit was set aside on procedural grounds in late 2014, but the National Energy Board has since admitted major problems with its regulatory framework and the Federal Government of Justin Trudeau has since launched an inquiry aimed at reforming the process.

As a siege mentality set in around the Stand office, staff posted new updates over Facebook Live. “This is a 4.6 billion dollar business,” said Stand employee Karen Mahon. “Sending the police to shut us down over $14,000 is not about the money.”  Staff also expressed concern about the seizure of laptops and personal effects. “We will be suing them if they try to take our belongings,” Mahon said. When asked about what might be done to avoid handing laptops potentially containing sensitive data over to police or Enbridge, Todd Paglia, Executive Director of Stand, answered, “We will physically not allow them,” citing advice from the organization’s lawyer. “It will turn into a pretty ugly situation very quickly.”

Just over an hour after Stand issued a press release, Enbridge tweeted stating that they had asked RCMP bailiffs to stand down.

Thankfully, that ugly situation was avoided. No doubt realizing the looming public relations crisis, Enbridge backed down within an hour of the original social media posting by Stand. Stand staff were notified by media that Enbridge was making a statement soon and were again notified mid-livestream that Enbridge had tweeted its capitulation.

Stand staff discovered Enbridge's tweet distancing themselves from the seizure in the middle of a Facebook Live broadcast.

The end result is that today Stand’s Vancouver office still exists, is still in possession of all of its assets and the writ of seizure was abandoned by Enbridge. There is an obvious threat to free expression, civic advocacy and dissent from this kind of legal action. While Stand were aware of the court assessment and the outstanding amount, the manner in which this writ of seizure was served did not adequately prepare the organization for the appearance of police on their doorstep. The seizure by police of an advocacy organization’s electronics, and subsequently their confidential data should be unconscionable in a democracy. This is especially true since the assessment was the result of a legal action which the advocacy organization initiated in the public interest and the seizure was being conducted on behalf of the organization’s opponents. Faced with the possibility of this kind of retributive behaviour from corporations and agents of the state, advocacy groups in Canada certainly should consider what they plan to do when the police turn up with a warrant.

Kevin Metcalf is the Promotions and Communications Coordinator of Canadian Journalists for Free Expression, previously he served as a volunteer Development Coordinator with Toronto350.org and managed of the website Pipeleaks.org which supported the campaign against Enbridge's Line 9 pipeline.