Syrian journalists on their own in a danger zone 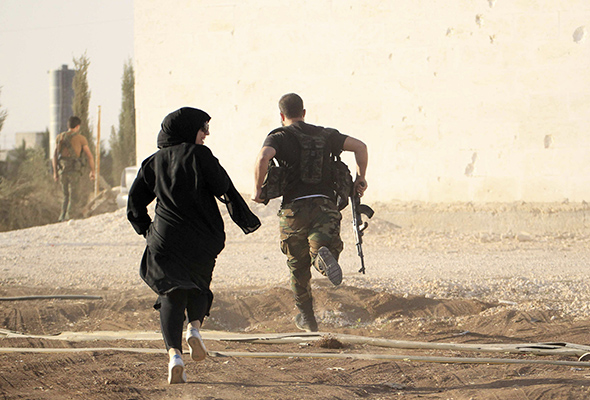 A female Syrian reporter runs with a rebel fighter to avoid snipers at the frontline against the Islamic State fighters in Aleppo's northern countryside October 10, 2014. PHOTO: REUTERS/Jalal Al-Mamo
Who protects the rights and lives of local reporters in Syria?

Without support from western media organizations, kidnapping, death and a paltry amount of cash are sometimes the only rewards for the important work of front-line Syrian freelancers.

For three and a half years, local Syrian reporters have been providing us with a steady stream of information from the war torn country. There is great fluidity in their actual roles; are they journalists, activists, or citizen journalists? At the onset of the Syrian uprising, these individuals started uploading amateur videos to YouTube and tweeting updates on fighting in their neighborhoods. Later on, many of them were contacted by media companies for more footage and exclusive reports.

Forty-five months have now passed since the start of the conflict and these individuals, who have fine-tuned their practical skills in the field, are still not professionally classified. This allows some media organizations to wash their hands of responsibility for the lives and well-being of their Syrian freelancers.

While working with a media freedom centre in the Middle East I met with more than 200 local Syrian reporters near the northern borders of the country. We trained them on professional reporting, but I also ended up learning a great deal from their rich personal experience.

Local journalists are now the only newsgatherers bearing witness to Syria’s war, since international reporters have been barred or restricted, or pulled out by their networks due to the dangers of reporting in the country. This has led to a situation where we in the west watch reports by local journalists from the safety of our couches as they risk their lives to keep us informed.

When meeting with these young reporters one wonders what laws exist to protect them, and if there are international regulations to define media companies’ responsibilities to local freelancers. It’s worrisome that there isn’t a clear answer to this question. One also wonders if meager paycheques, rudimentary training workshops and the provision of basic safety equipment and medical insurance are enough to compensate these individuals for the risks they take to work in active combat zones.

Sadly, a large percentage of these intrepid freelancers don’t even receive those basic, often life-saving benefits. Many Syrian reporters find themselves forced to operate in an unpredictable and dangerous arena without adequate financial, logistical and institutional support, and the international media community still has not come up with meaningful reforms regarding freelancers’ rights, despite the mounting evidence that such reforms are crucial.

THE ABSENCE OF RIGHTS FOR LOCAL SYRIAN REPORTERS

Many Arab news organizations covering events in Syria do not issue contracts for freelancers due to the high-risk environment that they operate in. Ibrahim Al Idelbi, one of the local Syrian journalists interviewed by CJFE (pictured, left), 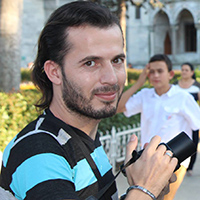 counts himself lucky to have a letter from Al Jazeera which confirms that he is a freelance journalist; but, he was neither trained in first aid nor did he receive anyjournalist security training. Furthermore, he operates without a helmet and flak jacket — standard issue to western journalists in war zones — as do the majority of reporters in Syria.

Al Idelbi has been reporting from the province of Idlib in northern Syria since the beginning of the Syrian revolution, and working for Al Jazeera as a freelance correspondent since early 2014. Similar to other Syrian reporters, his fear of losing his job means he rarely turns down an assignment.

“If I get a request by Al Jazeera to cover some battle, I go,” he says. “Even if it was in a dangerous zone, there were only [a] few times when I declined missions for my own safety.”

Resentment toward media conglomerate indifference to freelancer safety is escalating.

A citizen journalist who preferred to remain anonymous told CJFE that he compares himself and other Syrian local reporters to “laboratory mice.” When international reporters are fearful to risk their lives for a story, he says, they ask local journalists to report the war for them.

“International reporters sit in their five star hotels, get our reports, put their names on them and hand us some tens of dollars,” he says. “Despite this, Syrian local reporters still race to serve international journalists for the sake of money.”

He credits this situation to the perception, in mainstream media at least, that the death of an international reporter is more costly than the death of local Syrian reporters. The worst part of engaging with these large media organizations, he says, is that they may not pay at all if the video he shoots isn’t high enough quality for broadcast, regardless of the risks he took in shooting it.

Meager salaries are the main factor contributing to the exploitation of media workers in Syria. Zakwan Hadid (pictured, left) 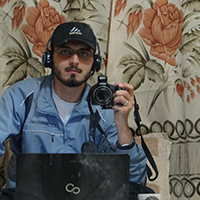 has worked in media coverage and as a spokesperson for three Arabic outlets. Over his three years in the position he conducted over 100 video reports, 300 written reports and was invited about 700 times to speak on air for several Arabic news channels.

Hadid says many local Syrian reporters did not mind reporting for free at the beginning of the revolution. They believed they were serving the movement for political change. However, media companies continued to ask for reports without compensating the journalists even as the war showed no signs of abating, and failed to take responsibility for their correspondents inside Syria.

“It is different now,” he says. “We are devastated; we are either killed by the regime or radical militias or by hunger. Some journalists left everything behind to take up media as a profession, but we cannot survive like this.”

Hadid once asked Al Arabiya TV to provide him with a reference letter but they refused, saying he might use it against them in the future to claim compensation for injuries or trauma sustained in the course of his work.

Hadid recently moved to Turkey, where he works as a peddler in the streets of Istanbul. He says he’s eager to reach the day when he can sue all Arabic news stations for exploiting local reporters’ in Syria.

MEDIA COMPANIES’ RESPONSIBILITIES TO THEIR LOCAL REPORTERS IN SYRIA

It is widely known in the international media community that freelancers are the most vulnerable journalists. Many lack parent companies to provide them with safety training, equipment or insurance. However the Syrian situation is worse, as media organizations have been using “fake freelance” media workers.

The European Federation of Journalists (EFJ) explains this as a “position by employers who break local rules on employment by using freelancers to fill full-time posts while avoiding state welfare and social charges.” The goal is simple — to cut costs. Regardless of the specific arrangement the EFJ stipulates that any “freelancer [fake or forced] who is economically dependent should be treated as an employee and will receive all statutory rights and benefits.”

Likewise, the Charter for the Safety of Journalists Working in War Zones and Dangerous Areas, created by Reporters Without Borders (RSF) and adopted in 2002 with the consent of many of the same media organizations currently reporting on the Syrian war, dictates that “Media workers, journalists and their assistants (whether permanent staff or freelance) working in war zones or dangerous areas are entitled to basic protection, compensation and guarantees from their employers…media management also have their own responsibility to make every effort to prevent and reduce the risks involved.”

Ideally, media companies should offer training, safety gear, insurance and fair wages to freelance reporters. Most importantly, they should not push freelancers into reporting from dangerous zones, either explicitly or implicitly through the threat of withholding pay. Sadly, this is not the reality for those reporting from Syria because these regulations aren’t enforceable.

The lack of liability and danger of reporting has led to a dramatic decrease in the number of Syrian citizen journalists. In 2011 there were about 350 reporters working for the pro-revolution Syrian News Network (SHAAM). Now there are 75. The local Syrian reporters’ passion to tell their people’s story is now tempered by potentially fatal factors and this is raising waves of complaints amongst Syrian local reporters who want news organizations to take responsibility for their safety. They want protection, and although there are a number of international initiatives meant to protect reporters in conflict zones, they are out of date, not binding, and not comprehensive.

For a strong, free press to continue to exist in these conflict zones, the responsibility of news organization to protect freelancers must be enshrined in common international standards.

Ghalia Bdiwe is a volunteer for CJFE and a freelance journalist based in Toronto. Follow her on Twitter@ghaliabdiwe