Take Action: Tell the King of Bahrain free expression is not a crime 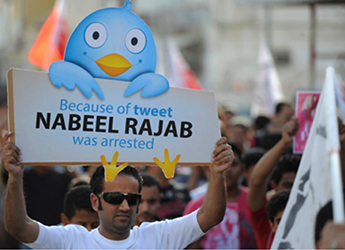 Said Yousif at a peaceful demonstration in Bahrain after Nabeel Rajab was arrested and jailed in August 2012.
Sign the petition! As the second anniversary of the pro-democracy protests in Bahrain approaches on February 14, IFEX has launched a petition in support of free expression in the country. The petition is asking the King of Bahrain to free all human rights defenders, journalists and bloggers languishing in jail, some for life, simply for peacefully exercising their right to free expression and assembly. IFEX member, the Bahrain Centre for Human Rights (BCHR), the most vocal independent human rights organisation in Bahrain, has been particularly targeted, with past and present BCHR representatives serving prison sentences, or on trial, including: Join us in asking the King of Bahrain to release the BCHR activists, and all those imprisoned for peacefully exercising their right to free expression.