Taking a stand on freedom of speech and your right to know: Public Editor, Toronto Star 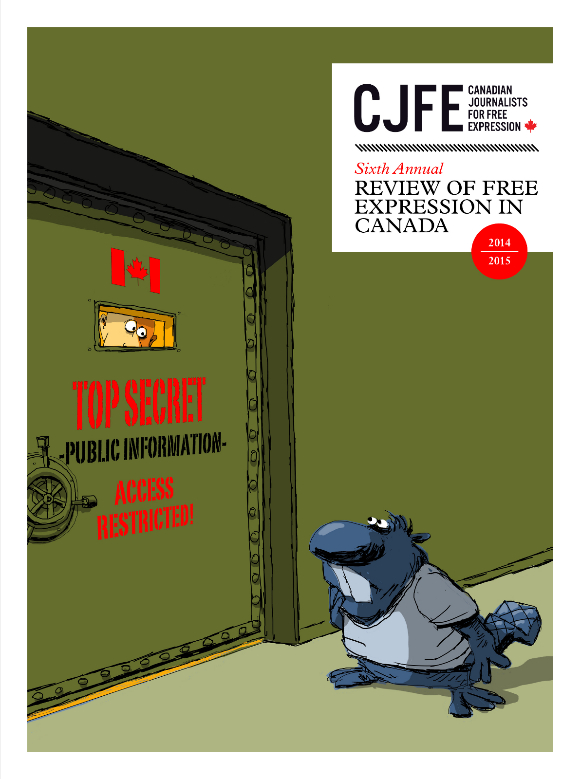 CJFE's sixth annual Review of Free Expression in Canada documents alarming threats to freedom of expression and our right to information.

Canadian Journalists for Free Expression says its time we spoke with our ballots about threats to free expression and our right to know. By Kathy English, Public Editor Will 2015 be the year Canadians become aware and angry enough to take political action on threats to freedom of expression and our right to know? Certainly, these bedrock elements of Canadian democracy are at risk as never before. As the free expression advocacy organization, Canadian Journalists for Free Expression, concluded in releasing its sixth annual review of free expression in Canada last week: “This has been a terrible year for free expression in Canada. “Our right to know has never been more threatened. Years of government neglect and political interference have left our Access to Information system an antiquated, ineffective shell of what it is supposed to be. “When combined with our total lack of effective protection for whistleblowers and a pervasive culture of secrecy in Ottawa, we are left with a perfect storm buffeting the strength of our democracy.” The powerful report documents alarming and very real threats to freedom of expression and our right to information — the silencing of scientists, new anti-terror legislation and increased digital surveillance, a broken Access to Information Act, the overuse of court publication bans, lack of legal protection and security for freelance journalists. Still, there is some relatively good news amid the sombre stats and concerning conclusions of this year’s review. It seems the Canadian public is “waking up,” coming to a greater understanding of the critical connection between free expression and democracy. As the report states, “Free expression is under attack in Canada, but as our report card and accompanying poll show, Canadians are finally fighting back.” In its “report card” grading various free expression issues in Canada, CJFE gives a “B” grade to “public awareness” and signals a growing desire among Canadians to do something about limitations to our freedom of expression and right to know. The CJFE poll, conducted earlier this year by Nanos Research, found a clear demand among Canadians for more government openness and increased freedom to speak openly, with 95 per cent concerned or somewhat concerned about government transparency. “Our poll shows that Canadians understand that what we don’t know can hurt us, and they want change,” said Tom Henheffer, executive director of CJFE, which has been protecting the right to free expression in Canada and abroad for more than 30 years. “The public is angry and upset that their rights have been rolled back,” Henheffer told me this week. “We have never seen these issues picked up so much in public discourse.” The vital question remains whether this enhanced public awareness and increased anger — undoubtedly stoked by those on social media quick to call out injustices — will make a difference in this fall’s federal election. Henheffer said CJFE believes freedom of expression and right to know issues will indeed be part of the public’s election agenda, particularly concerns about Bill C-51, the Harper government’s controversial anti-terror legislation, passed earlier this month in the House of Commons. CJFE plans to do all it can to give voice to freedom of expression concerns during the coming election campaign. “The next government must be held to account and people need to let politicians know their views on these issues with their ballots,” Henheffer said, adding that CJFE is already meeting with the major federal parties to determine their positions on openness and transparency. “This matters to Canadians,” he said. “We’re going to be beating the bushes to make these issues election issues.” I am glad to know that CJFE is taking a stand and urging Canadians to speak with our ballots about matters that speak to the heart of our democracy. As CJFE vice-president Alice Klein, the cofounder, editor and CEO of NOW magazine writes in this year’s review: “Free expression is democracy. “Without it, political choice is a farce,” she states. “You can have all the elections you want and they will mean nothing without the secure right to express, share information and advocate for your views.” The review is packed full of such eloquent, thoughtful articles and essays that speak loudly and clearly to the many threats to freedom of expression and the right to information — and why we should care. It is available for free download at CJFE’s website and well worth reading. Better still, this is information well worth acting on when it comes time to cast our votes this year.

This article was originally published on Friday, May 15, 2015, in the Toronto Star.