The Chill of Impunity: A Global Problem 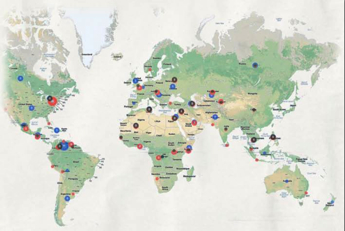 “Impunity: when intimidation, threats, attacks and murders go unpunished, resulting in a climate of injustice and insecurity for those exercising their right to free expression.” - IFEX

A culture of impunity produces an environment where individuals are afraid to speak out. When a journalist is attacked or worries their family and loved ones may be targeted, they often silence themselves, resulting in self-censorship. Fear of reprisal for challenging the authorities is so great that individuals remain silent, and free expression is threatened. The interactive map below highlights cases of impunity from countries around the world where this is a particular problem. From the incredible range of these cases it is clear that impunity continues to be a major issue threatening the health of free expression around the globe. Although some countries have been making positive steps toward ensuring justice for attacks against journalists, these have often been accompanied by disappointing steps backward. In Mexico for instance, legislation was passed to establish federal government oversight in prosecuting crimes against journalists and freedom of expression. However, Mexican reporter Verónica Basurto Gamero has also revealed huge problems in the Federal Mechanism for the Protection of Human Rights Defenders and Journalists. For instance, it can take up to 20 minutes for police protection to respond to a journalist’s call for help, during which time “you may already have been bundled into a car, kidnapped or killed.” To learn more about impunity, read the article in our 2012-2013 Review of Free Expression in Canada. You can download the article in PDF, or read the article online at the bottom of the page.

Impunity around the globe

Scroll over the image below for cases of impunity from countries where there is little justice for attacks against those who dare to speak up.

Read the original article from the Review