The dark side of Mexico's drug war: A lack of reporting on the crisis 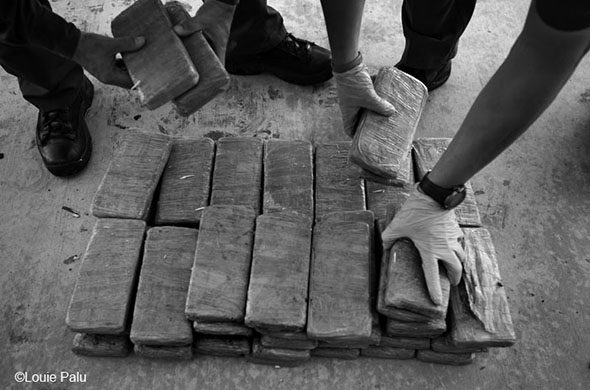 U.S. Border Patrol Agents stack bundles of marijuana seized from a vehicle at a checkpoint on the I-35 highway just north of the key port of entry from. Mexico located in Laredo, Texas. PHOTO: Louie Palu/ZUMA Press
By Naser Miftari

The nearly decade-long war on drugs initiated by the Mexican government and military against rival drug cartels fighting for regional control has claimed close to 120,000 lives. The recent discovery of 30 bodies in mass graves in the town of Iguala, and of the alleged involvement of the town’s former mayor in the students’ murder, has raised serious questions about the legitimacy of the agencies nominally tasked with battling drug cartels, particularly with regards to corruption in local government and security forces.

Even as the ongoing investigation into the horrific September 2014 murder of 43 students in Iguala have triggered massive protests and outrage among ordinary Mexicans, the story of the precarious human security in Mexico remains somewhat under-reported in the Canadian media.

Throughout this time, Mexico has received limited and sporadic media coverage in North America. Even while international media coverage has intensified, as it did during the Iguala events, it has remained selective and episodic.

In separate interviews with CJFE, Mexican expatriates, sources inside Mexico and Canadian journalists point out that we only get bits and pieces of the broader picture on the ground, and most of the time we are kept in the dark due to the failure of international and Canadian media to understand and report the complexities of Mexico’s situation. Furthermore, the competing interests and endemic corruption which lie at the heart of the Mexican Drug War have not been sufficiently investigated, nor have the roles of the state apparatus and local government leaders in perpetuating the violence.

There is very little in the Canadian press regarding the conflict. In the course of almost a decade since the drug war began, there have only been a few dozen articles published in our mainstream press on the issue.1

Out of all the Canadian mainstream publications, The Globe and Mail has conducted the most reporting on the issue. Yet, it has published only 22 articles on the subject in the course of almost nine years. Other major outlets such as Toronto Star and The Vancouver Sun lag behind The Globe in such reporting.2 The scope of coverage is too limited considering the magnitude of the conflict and its proximity to our own borders. Coverage is similarly scattered in the American press. Newspapers in states closer to Mexico, such as El Paso Times in Texas published the highest number of articles in the period covered and while Mexico’s Drug War is covered more in the US press than in Canada, the violence still remains under-reported.3

Fear and safety among Canadian journalists are some of the main challenges with regards to reporting from Mexico, but the impossibility of penetrating the networks and understanding the complexities of the conflict also stand out as important factors. In addition to the aforementioned factors, a compassion fatigue of the Canadian and US publics about the difficulties faced by other countries represents another dimension of the phenomenon of under-reporting on Mexico.

Luis Horacio Nájera was a recipient of a CJFE International Press Freedom Award in 2010. Beginning in 1995, he covered the drug war for the newspaper El Diario de Juarez in what was once the most dangerous city in the world, the Mexican border town of Ciudad Juarez. In 2008, Nájera fled Mexico and settled in Canada after it became clear to him that his life was in imminent danger from cartels. He recalls that long before the official ‘war on drugs’ began, Ciudad Juarez was on international media’s radar due to the rapes, murders and disappearances of hundreds of young women.

“As an insider, I used to talk to journalists from all over the planet who came to the border to report on gender violence. Since then, and during my time documenting the war on drugs, I don’t recall any Canadian journalist visiting Ciudad Juarez,” says Nájera, who was recently a visiting fellow at the University of Toronto and co-authored "Democratic Governance in Latin America: a regional discussion" [IRI, Washington, D.C., 2013].

Due to fear for their own lives, the safety of their fixers and a range of other economic and contextual factors, few Canadian journalists attempt to witness Mexico’s urban war first-hand. Canadian photojournalist Louie Palu is one of the few who has ventured around cartel hot spots in Mexico. His feature on Mexico ran in The Globe and Mail in 2013.

Palu notes that Mexico’s drug war is a difficult one to cover and entails complexities beyond the safety of journalists.

“There are no embeds to go on like in Afghanistan or Iraq where soldiers can deliver you to the front lines,” he says. “The cartel associates and soldiers mix into the daily pattern of life. Everything happens in the shadows, and one must have the experience and street smarts to dig deep to report on the story. Most do not.”

He points out that the situation in Mexico goes beyond the standard context of organized crime and the illegal drug trade that exists in other countries around the world.

“Mexico is very much at war,” he says.

Palu further observes that the methods and strategy of warfare he has witnessed first-hand between cartels are as complex as any military operation he saw during his five years of reporting in Afghanistan, emphasizing that “without exaggeration, the armed groups and assassins are professional soldiers and killers equal to any army in the world.”

Palu admits that he has not seen any in-depth stories in the Canadian media that delve into the particularities of the Mexican war on drugs.

“When there is an article on the drug war in most Canadian media outlets, it’s usually a one-off story,” he says, adding that he has never seen a story in the Canadian media that connects the cocaine that appears on the streets of Toronto to the trail of dead bodies it costs to smuggle those drugs from Mexico. This makes Palu wonder about the in-depth coverage given to other hot spots in the world by comparison.

“Take for example ISIS in Iraq and Syria,” he says, “how much of a threat is ISIS to any city in Canada compared to the threat that serious narcotics such as heroine, cocaine and methamphetamine cause on our streets everyday?”

“Canadian media has no apparent interest in Mexico, at least from the perspective of constructing among its audience a ‘collective memory’ similar to what most of the national media built for the Middle East or Africa. I don’t think this is happening [with] Mexico,” says Nájera.

It’s certain that, absent such a collective memory, there cannot be an anticipation of sustained interest on the issue of Mexico as in those other parts of the world, and this in turn contributes to the insufficient reporting of Mexico’s situation.

In 2013, Reporters Without Borders wrote that 86 journalists had been murdered in Mexico over the past decade. Most of these deaths were related to the coverage of crime, corruption and drug cartels. According to a 2014 press release from PEN International, three journalists and one social media activist were murdered for their work in the coverage of the police beat and cartels in Mexico. 2015 so far has not offered any indications that the situation will improve. Newspaper editor José Moisés Sánchez Cerezo was found dead on January 24 in Veracruz, 22 days after he was abducted from his home in Medellín de Bravo, Veracruz state, by a group of heavily armed men.

Nájera notes that despite numerous international campaigns to raise awareness about violence against journalists in Mexico, impunity and a climate of censorship still prevail in the country. Even the creation of a special prosecutor for crimes against freedom of expression and journalists has not been successful in deterring violence against journalists and the media. According to Nájera, this is due to a lack of political will on the part of local government officials to prosecute these crimes, and a massive network of corruption amongst security services, politicians and the cartels translates into a failure to successfully hold anyone accountable for crimes against journalists.

“Sadly, corruption and impunity are linked,” says Nájera. “Hence some members of the police are not willing to investigate [these crimes] because of the bribes they receive, or because of the fear of being assassinated by criminal organizations. Such a sense of impunity in turn expands, creating a general idea that you can do whatever you like with a journalist and nothing is going to happen.”

To Mexicans whose lives have been tarnished in the nine years of the systematic campaign against drugs, none of this is news.

“People are outraged but feel powerless, immobilized. Mexico wants to be part of the global community, wants investments. And this other real, bad news impacts such goals. It is hard. You cannot ignore it, but it is as if [the] government wants people to ignore it. So that outsiders would think – well, it is bad in Mexico, but not that bad after all,” an insider in Mexico tells CJFE, speaking anonymously for fear of reprisals.

“It's not just fear that drives reporting or non-reporting of events in Mexico. There is the [Mexican] administration's need to project a sense of achievement (compromiso cumplido), of which the drug war is a part. This then plays out in how bad things that happen all the time are hidden under the carpet.”

For journalists like Palu, it seems that “Canada is out of touch with Mexico except for seeing it only as a tourist destination, which is what the Mexican government would prefer we focus on.” He further notes that public relations campaigns led by the Mexican government and PR firms based in Washington, D.C., which project the image of a beautiful tourist destination with a strong economy, have worked to partially blind the international media and the public.

“This war is only going to get worse, and I think it’s about time we pay more attention to it. It has a direct impact on our everyday lives here in Canada,” Palu says.

Naser Miftari holds a Ph.D. in Political Science from University of Nebraska-Lincoln and a Master’s in Journalism from Temple University in Philadelphia.

1. In a brief analysis of the articles retrieved through LexisNexis, which includes most of the mainstream press in the United States, Canada and the rest for the period between January 1st, 2006, until August 31st, 2014, using the keywords “Mexico Drug War,” there appear on average between one and three stories per year. There are even fewer stories reported on broadcast media in the United States and Canada during the selected period of time.↩

2. The Globe is followed by Toronto Star and The Vancouver Star (19). Other newspapers such as Calgary Herald, The Windsor Star, National Post and Ottawa Citizen have published between 10 (Ottawa Citizen) and 13 (Calgary Herald) in total. ↩

3. For example, The New York Times has published 48 articles on the matter and is closely followed by CSM and The Washington Post. Being closer to the conflict seems to trigger more interest. Hence, the writing of the Times is surpassed by El Paso Times of Texas, which devoted 55 articles to the issue of the Mexican Drug War since the campaign began in 2006. The findings are based on the use of the keywords “Mexico Drug War” in LexisNexis. The New York Times – 48, The Washington Post – 44, El Paso Times – (Texas) – 55.↩