The Free Speech Quandary: Defending the Rights of Extremists 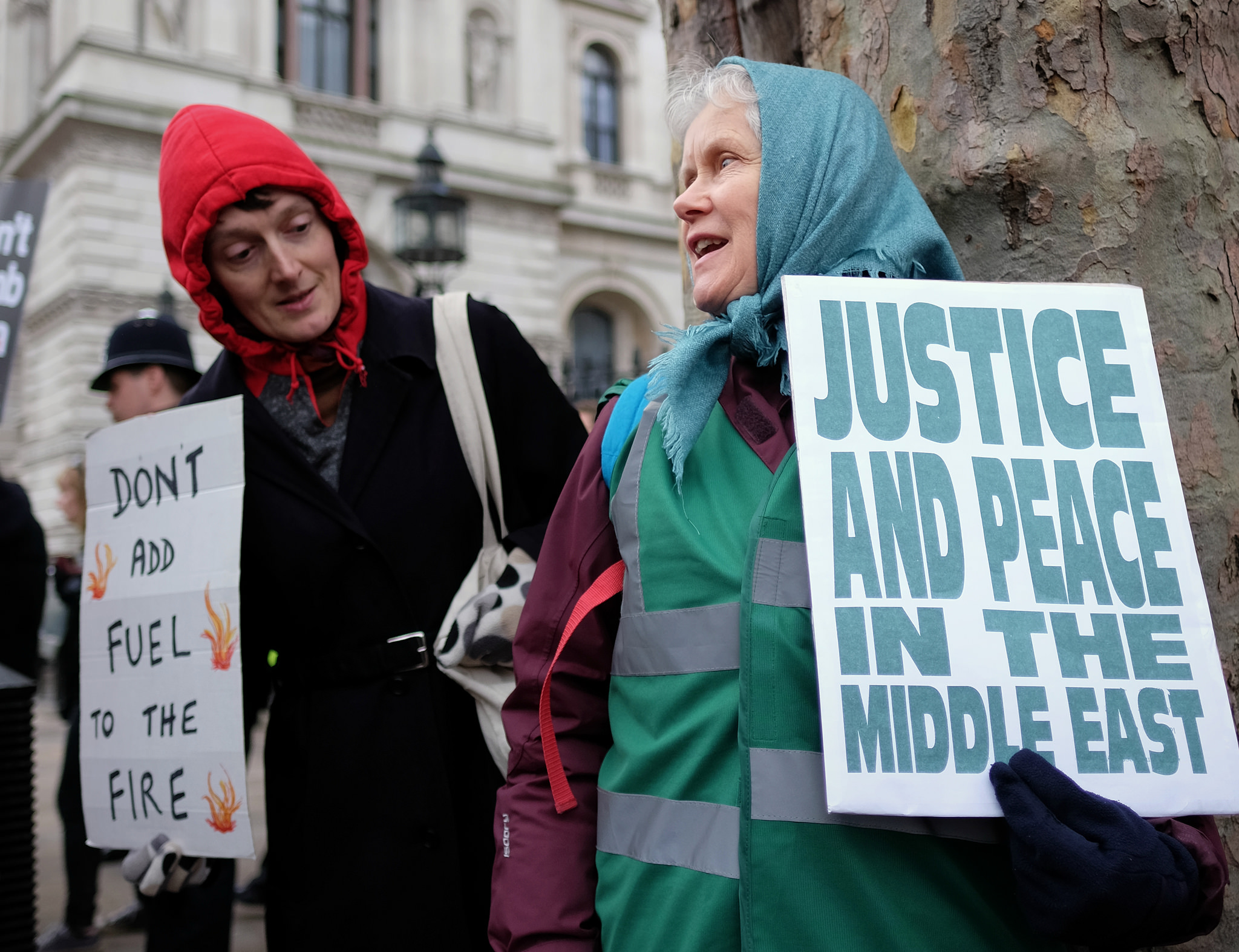 Protestors gathered in London in November 2015 to protest the British government's decision to press ahead with air strikes on Syria. PHOTO: Alisdare Hickson/Flickr (Creative Commons)

As the line between providing material support for terrorist groups and speaking out in support of them is blurred through legislation like Bill C-51, free speech advocates may find themselves defending the rights of extremists to openly declare themselves for terror.

“The trouble with fighting for human freedom is that one spends most of one’s time defending scoundrels,” wrote H.L. Mencken. “For it is against scoundrels that oppressive laws are first aimed, and oppression must be stopped at the beginning if it is to be stopped at all.”

Mencken dealt with a considerable cast of charlatans and rabble-rousers in his own day, but he could have been thinking of someone exactly like Anjem Choudary when he made his remark. Choudary, a British Islamist cleric, made the news recently when he was charged and taken into custody for “inviting support” for the Islamic State “in individual lectures which were subsequently published online.” After several delays, his trial is scheduled to begin March 7.

Choudary is in the news a lot, in fact, and as ‘scoundrels’ go has few contemporary equals. He is a familiar figure in the British media; well-spoken and self-assured, he frequently appears on television and gives interviews to argue in support of ISIS and other extreme Islamist causes. He has mastered the art of gaining publicity through statements and actions carefully calculated to incite outrage and inspire sensationalistic tabloid headlines.

Choudary has called the September 11 hijackers “magnificent martyrs,” and stated that non-Muslims cannot, by definition, be considered innocent: “When we say ‘innocent people,’ we mean Muslims—as far as non-Muslims are concerned they have not accepted Islam and as far as we are concerned that is a crime against God.” As for permissible tactics when confronting such ‘criminals,’ Choudary is unequivocal: “Terrorizing the enemy is, in fact, part of Islam,” he told Russia Today. “This is something that we must embrace and understand as far as the jurisprudence of jihad is concerned.”

Choudary has a flair for touching off gratuitous media spectacles and earning mass attention with little more than a press release. In 2010, Choudary announced that his group, Islam4UK, would march through the town of Wootton Bassett carrying hundreds of coffins, symbolizing Afghani Muslims who were “killed for political mileage and for the greedy interests of the oppressive US and UK regimes.” Wootton Bassett had previously obtained a degree of reverence in the UK as the site of solemn and well-attended funeral processions for British soldiers killed in the Wars in Afghanistan and Iraq—similar to Canada’s “Highway of Heroes.” This was so perfectly crafted to spark outrage that one can almost admire the skill involved. Islam4UK was furiously condemned by groups across the political spectrum, as well as by many Muslim organizations, with then-Prime Minister Gordon Brown calling the plans “abhorrent and offensive.” In the end, the march never went ahead: Choudary had already gained maximum media coverage, the point of the exercise.

Some might understandably read all of this and think, pace Mencken, that what we have here is something far worse than a mere scoundrel. And indeed, while Choudary has never been accused of direct involvement in acts of violence, he has unquestionably influenced some who have. One of the murderers of British Army soldier Lee Rigby in 2013 was formerly a member of Choudary’s Al-Muhajiroun extremist organization, and was reportedly heavily influenced by Choudary’s preaching. Likewise, a 2011 report by the Henry Jackson Society found 25 terrorism convictions between 1999 and 2010 were connected to Al-Muhajiroun, the precursor to Islam4UK.

As Douglas Murray, associate director of the Henry Jackson Society, told me, “[Choudary’s] followers have been involved in most of the major plots in the UK, including the attempt to do a Mumbai-style attack on the London Stock Exchange.”

Still, and to be perfectly clear, Choudary is not being charged with planning terrorist attacks, raising money for a terrorist organization or even the nebulous crime of ‘inciting violence.’ He is being charged with expressing a political opinion. The charges come under Section 12 of the UK’s 2000 Terrorism Act, which states that a person commits an offence if he “invites support for a proscribed organisation” or “addresses a meeting and the purpose of his address is to encourage support for a proscribed organisation or to further its activities.”

As Glenn Greenwald notes, this law, if consistently applied, would have made it a crime to support or encourage support for Nelson Mandela and the African National Congress during the 1980s and 1990s, when it was designated a terrorist group.

So the charges against Choudary, however outwardly justified given his history and associations, present a challenge to advocates of free speech. In a recent editorial, Greenwald blasted the widespread political support for Choudary’s arrest among those who had so loudly trumpeted their support for ‘free speech’ in the aftermath of the Charlie Hebdo murders. Greenwald, a consistent defender of absolute free speech, argues that a unique standard is being applied for criticisms of Islam, one that is not extended to those that Western governments view as adversaries.

Even among several long-time critics of Islamist extremism there is a reluctance to endorse the laws under which Choudary is being charged. Conrad Black, who once wrote that “Western counter-attack against militant Islam…should have been launched by our united civilization many years ago,” told me that “the criterion has to be the intentional desire to incite acts of violence, and the adjudication of it must involve reasonable due process, and not just the arbitrary views of law enforcement rubber-stamped by a docile magistracy with no balanced judicial review...If he isn’t inciting violence, he should not be convicted.”

English writer Kenan Malik is one of the most eloquent and clear-sighted navigators of the intersection between free speech, multiculturalism and Islam. He cites “Enlightenment rationalism and secular universalism” as his principal political commitments, and is unequivocal when I ask him about Choudary.

“I abhor Anjem Choudary and all that he stands for. I have spent much of my life challenging Islamism. But Choudary has, in my view, the right to express even the most repulsive of views,” Malik says. “There is an important distinction to be made between expressing an opinion, even in support of people carrying out violence, and directly inciting an act of violence. ‘I support ISIS’ or even ‘ISIS is good’ are opinions and should be allowed. ‘Go kill that infidel’, is incitement and should be prohibited.”

Tarek Fatah, likewise a vituperative critic of Islamism, says that “in the absence of any ideological challenge to Sharia law in Britain by either politicians or sitting legislators, who are unwilling to outlaw such doctrines for fear of being seen as racists or xenophobes, locking up Anjem is neither fruitful nor just.”

Murray, by contrast, welcomes the charges, noting the continuous run-around Choudary has given British law enforcement, which frequently bans his groups only to see them reemerge with a new name soon after. “This isn't about the free speech-incitement borderline but about recruitment to banned organisations,” he says. “You could have the most liberal speech codes on the planet but still try to stop people joining terrorist groups which seek to harm your citizens.”

Choudary himself is, unsurprisingly, a hypocrite when it comes to supporting freedoms that are meant to be guaranteed in liberal democracies. After Islam4UK was banned in 2010, he complained to the BBC that “we are now being targeted as an extremist or terrorist organisation and even banned for merely expressing that. I feel this is a failure of the concept of democracy and freedom.” Yet he has told interviewers that “Muslims do not believe in the concept of freedom of expression,” and “As Muslims, we reject democracy, we reject secularism, and freedom, and human rights,” because such concepts are at odds, in his view, with the supremacy of Islam and Sharia.

Yet free speech protections extend even to those who despise the very idea of universal human rights. The unabashed and self-satisfied manner in which Choudary proclaims his support for the purveyors of suicide-murder, worldwide totalitarian Islamist government and the execution of unbelievers makes him an easy hate-figure and an irresistible target for new laws in the West that criminalize the “promotion of terrorism.” This also makes the defence of his right to speak, as per Mencken, of special importance.

Across the Western world free thought and free expression are being undermined, Canada very much included. “One the trends in speech laws in recent years has been a loosening of the notion of ‘incitement’, so that what are actually opinions are treated incitements,” Malik says. Bill C-51, passed in June 2015, introduces the new offence of advocating or promoting terrorism offences “in general,” a change called “extremely concerning” by legal experts Craig Forcese and Kent Roach.

While “likely not as broad as European offences that include glorification or apologie du terrorisme,” they write that they “have no doubts it is capable of chilling constitutionally-protected speech, and ultimately proving an offence that undermines more promising avenues of addressing terrorism.”

After the Charlie Hebdo murders in January 2015, Choudary tweeted, “If freedom of expression can be sacrificed for criminalizing incitement & hatred, Why [sic] not for insulting the Prophet of Allah?” Somewhat atypically, he has a point. Choudary may be a hypocrite, but that doesn’t make him wrong in this case, or the British government itself any less hypocritical for claiming to protect liberal democracy while taking a legal jackhammer to its foundational propositions.

As Malik said, at a 2008 Index on Censorship conference on ‘Extremism and the Law: Free Speech in an Age of Terror’: “we cannot have it both ways. If we invite the state to define the boundaries of acceptable speech, we cannot complain if it is not just speech to which we object that gets curtailed. The state should not define either what Muslims can say or what can be said about Muslims – or about anybody else for that matter.”

The same principle that allows Charlie Hebdo to mock Muhammad, heads of state and pederast Catholic clergy without fear of legal repercussion also protects, or by right ought to protect, men like Choudary when they speak out in support of Islamist theocracy and terrorism.

The surest guarantee that these principles will still be there when you or I need them is that they are not tossed aside in the case of the State’s official enemies. We are, after all, all scoundrels in someone’s eyes.