The Maple Spring: The impact on free expression in Quebec 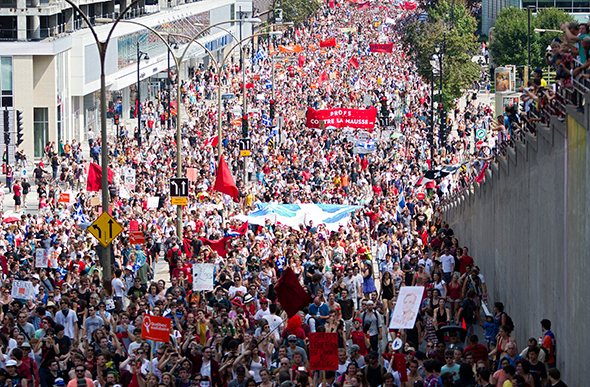 In 2012, a massive student strike over tuition fee increases rocked Quebec and thousands took to the streets, marching in protest. Today, a year and a half later, Montreal residents find that their ability to protest has been restricted, as the police employ increased powers to arrest and fine demonstrators.

“Previously, it was not illegal to just march in the streets,” recent McGill University graduate Erin Hudson says, “police would need to come up with a reason to arrest you, however arbitrary it may have been.” Hudson graduated from McGill in the fall of 2012, with a major in Political Science and Middle East studies. As news editor at the McGill Daily student newspaper, she reported on and participated in many of the marches in the spring and summer of 2012, which, at their peak, involved hundreds of thousands of protesters, and occasionally turned violent.

In many ways, the 2012 protests – called the “Maple Spring” (printemps érable) by some – were a success. They demonstrated that it is possible to galvanize public support for a just cause. That support extended beyond Quebec’s borders, as the flaming red square that became a symbol of solidarity with the cause adorned the lapels and the social media profiles of Canadians across the country for weeks and months on end. Motivated by the impetus to abolish tuition fees, a Quebec student unions position dating back to the 1960s, the demonstrations also achieved their concrete goal to compel the government to cancel the planned tuition increases.

Alarmingly, however, the size and impact of the Maple Spring also inspired legal efforts to reduce the space in which citizens can exercise their constitutional rights to freedom of expression and freedom of assembly.

So what happened? According to David Schneiderman, professor of constitutional law at the University of Toronto, the problem may be more general, as Canada has never had “a robust protection of the right to freedom of expression, both before and after the Charter.” Courts can be expected to uphold legislation and government actions, he asserts, that trample Canadians’ constitutional rights, in order to promote orderliness and “middle-class values”.

By empowering the Montreal police to arrest and fine illegal protestors, municipal by-law P-6 allows them to swiftly shut down demonstrations as soon as they begin. The by-law, passed in May, 2012, requires prior notice of a demonstration to be given to police, along with the planned itinerary. Failing that, the protest is declared illegal and the police are entitled to arrest and fine the violators. The by-law also forbids wearing face coverings such as masks and scarves while demonstrating.

According to the British Columbia Civil Liberties Association, more than 500 peaceful demonstrators were arrested and fined $637 each by the Montreal police in the course of protests taking place on March 15, 20 and 22, 2013. A National Post editorial claims that the police charged protesters as they began to assemble and enforced the process of “kettling” – a crowd control technique of separating and encircling protestors in order to contain and arrest them. Ironically, some of this happened on March 15, 2013, the International Day Against Police Brutality. Hudson recalls how, prior to 2013, the Montreal police used to handle the commemorative March 15 demonstrations in a more lax manner: “They would let the March 15 demonstrations go on for a while, and when they would shut them down, they would use a ‘loose kettle,’ leaving a window for those who felt threatened, or were on the edges or just happened to be there, to back out and go away.”

Given that the by-law was in existence in the late spring and the summer of 2012, why did the Montreal police wait until 2013 to apply it? The sheer size of the Maple Spring protests may have made it difficult for the police to implement the regulation. In Hudson’s view, this inability of the police to contain the protests led to unpredictability and the occasional use of violence. The reported number of arrests during the strike differs, but according to the report Repression, Discrimination and Québec’s 2012 Student Strike, the police arrested 3,509 people between February 16 and September 3, 2012. The report is based on the accounts of 274 witnesses and testifies to numerous instances of police brutality. The alleged infractions range from verbal abuse to one protester losing his eyesight. A public inquiry into the police behavior during the strike, theCommission spéciale d’examen des événements du printemps 2012, held its first hearings in September, 2013. It is expected to submit a report to the Quebec government by late December, 2013.

While the most recent police actions in Montreal have effectively pre-empted demonstrations, likely to avoid losing the ability to control the protests like it happened in 2012, the dispersals have been markedly non-violent. “People just take their fine tickets and walk away; you know what to expect” Hudson comments. But this is no less serious an infraction of constitutional rights, Schneiderman asserts. “Pre-empting protests to avoid disorder is problematic, because the exercise of freedom of speech as such is often unruly,” he says.

According to Schneiderman, the Montreal police’s relatively restrained behavior in 2013 is likely a lesson learned from the 2012 strike events. In the same way, the good demeanor of the Toronto police evicting Occupy protestors in 2011 resulted from having endured the public’s harsh criticism of how the 2010 G-20 summit demonstrations were handled. “At Occupy, police were at their best behaviour, as, even though no one has actually been held responsible for the brutal mass arrests around the G-20, there was enough bad press to make them want to be exemplary the next time,” he says.

But the parallels between the Occupy Toronto movement and the recent protests in Quebec don’t end there. In Toronto, the city had the Occupy members evicted from their camp in the downtown St. James Park for violating municipal rules against erecting structures and spending the night in public spaces. The court-issued injunction that enforced the eviction notices was, according to Schneiderman, evidence of a lack of interest in freedom of speech on the part of the court, and a flawed justification for the restriction of the right, favouring the convenience of nearby residents. This, in his view, would inevitably fail the strict proportionality test under the Charter, which requires that the public benefit resulting from limiting a right outweighs the harm caused by its restriction. The take-away, Schneiderman comments, is that you can occupy a park in protest, but only for a month. Inconveniencing dog-walkers longer than that would be too much, it seems.

As to the ability to protest in Quebec and the adoption of the Montreal municipal by-law, the state of affairs looks far from auspicious. While it has been criticized by civil rights organizations and the Quebec Bar association, and, reportedly, a related class action lawsuit is being launched against the City of Montreal, P-6 remains in force to this day. It is enforced regularly by police: for example, most recently, it was used on October 10, 2013 to arrest protesters against the proposed Enbridge Pipeline, as the Montreal Gazettereported. Until and if the by-law is amended, or altogether abolished, it would take activists a lot of internal organizing to put up a large-scale protest, as spontaneous demonstrations are illegal and police can disperse them as soon as they start forming. Protesters would need to decide whether to submit an itinerary or not. To some people, that means a choice between being arrested and acquiescing to a limitation of their constitutional right to freedom of expression.

Radostina Pavlova is a J.D. candidate at the University of Toronto’s Faculty of Law.

Free Expression: Canada Freedom of Assembly type-feature Maple Spring Quebec type-blog_entry Free Expression and the Law
Do you like this page?
Tweet