The Pulse of Free Expression in B.C. 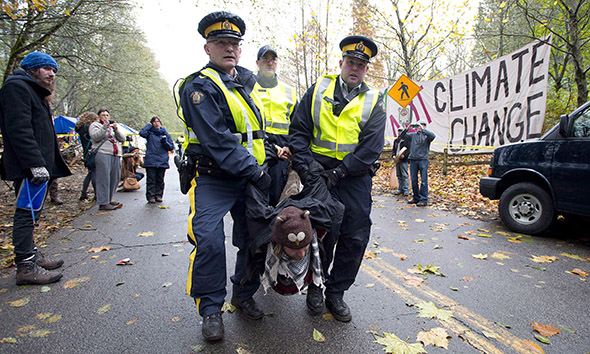 The RCMP detains protestors at an anti-pipeline demonstration in Burnaby, B.C., on November 20, 2014. PHOTO: Jonathan Hayward/CP

There’s a reason why British Columbia is at the forefront of challenges to freedom of expression. Almost invariably, wherever you find controversy, you will find one side or the other trying to censor their opponents or censor broadcast of the issues. The province is currently awash in controversies and fiery political debates, especially on issues relating to the environment and Aboriginal rights. Thus, B.C. has on display a veritable catalogue of tactics—some new, some revived—for quelling citizen speech and public participation. These B.C. battles are going to be critical in shaping the near future of freedom of expression in Canada.

At the pinnacle of B.C.’s free speech concerns is the re-casting of lawful demonstrations and protests as national security threats. In 2014, the BC Civil Liberties Association (BCCLA) launched complaints against the Royal Canadian Mounted Police (RCMP) and the Canadian Security Intelligence Service (CSIS) for spying on peaceful and democratic activities of community and First Nations groups opposed to the proposed Enbridge Northern Gateway Pipeline project. Ben West, spokesperson for ForestEthics Advocacy, one of the groups that was spied on, summed it up aptly: “Regular people are being made to feel like they are on a list of enemies of the state, just because they are speaking out to protect their community from a threat to their health and safety.”

The Civilian Review and Complaints Commission for the RCMP responded promptly by initiating an independent investigation into the complaint. CSIS took a different approach, essentially blowing it off, necessitating a further complaint to CSIS’s review agency. We don’t know what the outcome of these processes will be, but we do know that the situation is poised to get much, much worse.

We know this because, appallingly, the federal Government Operations Centre has called on all federal departments to track every protest in the country, casting all lawful assemblies as potential national emergencies, as an excuse for blanket surveillance of peaceful protests.

Further, Bill C-51, the new “anti-terrorism” legislation, would furnish CSIS with the powers of secret police to use dirty tricks (infiltrations and “disruptions”) in the name of “national security”—a term that is already sweepingly defined to include interference with the economic or financial stability of Canada and interference with “critical infrastructure.” This is not supposed to include lawful advocacy, but “unlawful advocacy” doesn’t mean criminal; it can include mere bylaw infractions. And anyone interested in the fine line between lawful and unlawful protest can look to Kinder Morgan pipeline protesters on Burnaby Mountain. Some hundred or so of them were wrongfully arrested for breach of a court injunction, but the charges were thrown out because they had been arrested for crossing a line that was literally drawn in the wrong place.

The courts are another huge free speech battleground in B.C. A number of cases are throwing our urgent need for anti-SLAPP legislation into stark relief. SLAPPs are strategic lawsuits against public participation. A SLAPP is when a large company or wealthy individual with vast financial resources brings a flimsy lawsuit against opponents with fewer resources (e.g., protesters, journalists, individual citizens) in order to intimidate and silence critics with the threat of an expensive legal battle. The iconic SLAPP case is probably the famed “McLibel case” (McDonald’s Corporation v Steel & Morris [1997] EWHC QB 366), in which U.K. environmental activists were successfully sued for libel for criticizing McDonald’s. The European Court of Human Rights later awarded the activists damages because the U.K. law failed to protect their right to speak out on matters of public interest.

Anti-SLAPP legislation provides a process for identifying and dismissing SLAPPs at an early stage of the legal process before the defendants’ financial means are eaten away by the necessity of defending against a bogus lawsuit. B.C. had the first anti-SLAPP legislation in the country, which was stealthily repealed only months after it was proclaimed. (Quebec is currently the only province with anti-SLAPP legislation.) The citizens of B.C. are in dire need of an anti-SLAPP law that will protect our right to speak out on matters of public interest.

Additionally, the report card on freedom of speech on campus is not looking good. Recently the B.C. Supreme Court ruled against the BCCLA and the University of Victoria’s pro-life club in a constitutional challenge to the censoring of pro-life opinion on the campus. In a disappointing decision, the Court found that decisions regarding booking spaces for student events are not activities to which the Charter applies. However, Charter-bound or not (a question that may be revisited on appeal), universities should be promoting, not suppressing, student expression. The site of so much controversy and so many active citizen voices, B.C. is one of the hot spots effectively taking the pulse of freedom of expression in Canada.

Micheal Vonn is a lawyer. She is the policy director of the BC Civil Liberties Association and advisory board member of Privacy International. This piece originally appeared in CJFE's 2014-15 Review of Free Expression in Canada.